Red-Green vs. Red-Green - The relentless struggle for the mud

At the end of last week, when it was almost too late to calm things down, Stephan Weil (SPD) finally let himself be carried away with a message of peace. 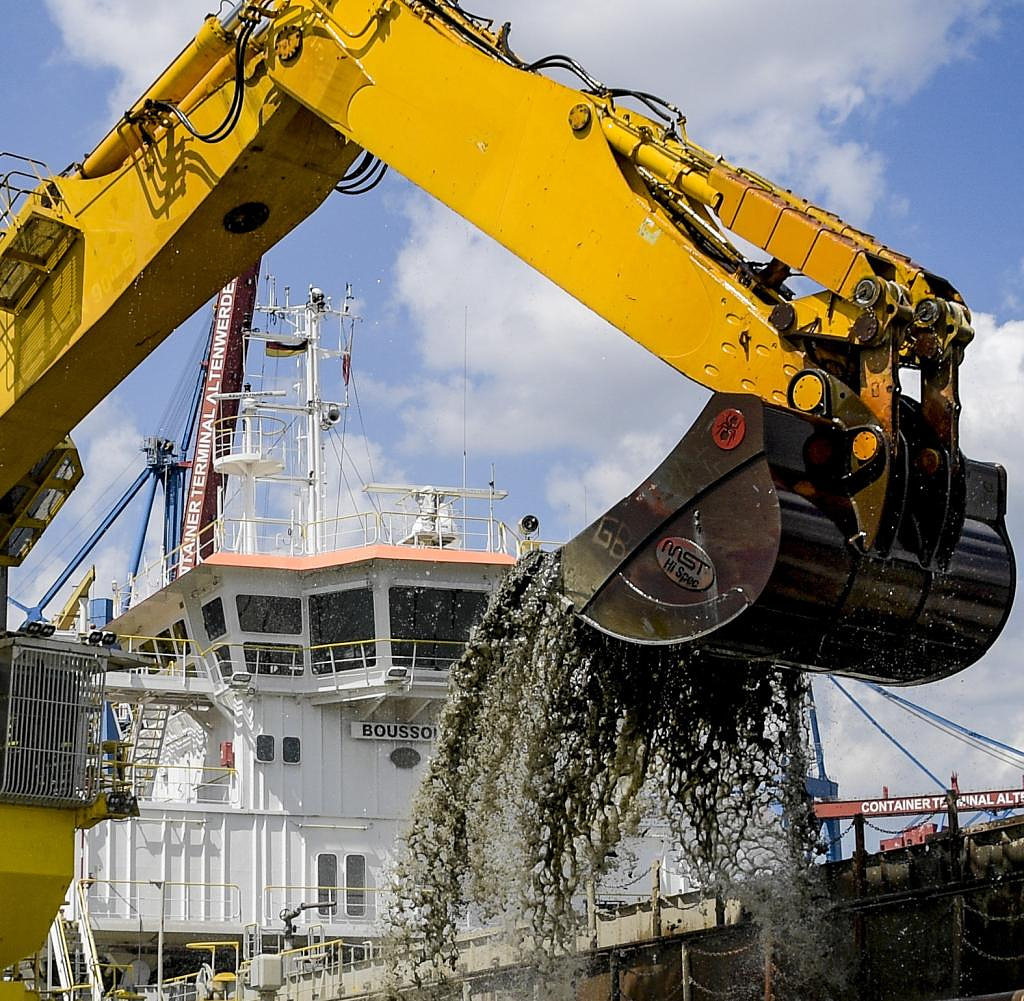 At the end of last week, when it was almost too late to calm things down, Stephan Weil (SPD) finally let himself be carried away with a message of peace.

In a letter to the Mayor of Hamburg Peter Tschentscher (SPD), the "dear Peter", and Schleswig-Holstein's Prime Minister Daniel Günther (CDU), the "dear Daniel", Lower Saxony's Prime Minister suggests: the dispute that has been smoldering for weeks about the Settling the Hamburg harbor silt in a "three-country talk" and "come to common, sustainable solutions to the silt problem of the tidal Elbe". That would be sorely needed.

For weeks, the red-green Hamburg Senate and the also red-green Lower Saxony state government have been arguing about where that mud should be shipped to in the future. The Hanseatic city has it dredged out of its harbor basin and the Lower Elbe every day in order to keep the Elbe navigable even for the largest container ships.

It has increased even more since the river's most recent deepening, which was completed in January of this year. The excavators can hardly keep up. The planned fairway depth of up to 14.50 meters is currently not being reached, as the responsible Federal Waterways and Shipping Administration announced to the Hanseatic city at the beginning of November.

It would have to be even more dredged if Hamburg's port is to remain the German gateway to the world. In two years at the earliest, probably much later, the depths envisaged with the most recent Elbe deepening, which was only completed in January, would be reached again. Provided you dig further and further. But what to do with the sand that keeps being washed into the Elbe?

A pressing question for the Hanseatic city that the Senate and the responsible port authority, the Hamburg Port Authority, would prefer to answer on their own.

An area not far from the Scharhörn bird protection island, which belongs to Hamburg, is to be used to dump the dredged material - i.e. unload it in the sea. An all-plan that Lower Saxony vehemently rejects with reference to the nearby Wadden Sea World Heritage Site and the partially polluted harbor silt.

This attitude even made it into the coalition agreement between the SPD and the Greens in October of this year. "We strictly reject silt dumping in front of the bird protection island of Scharhörn and will take legal action if necessary," it says. An announcement that Hamburg's Port Authority for its part gave an equally strict rejection of last week. From January 2023, the port authority announced that 2.5 million tons of silt would be deposited off Scharhörn every year.

Since the "planned transfer point in the Hamburg outer Elbe is spatially within a part of the federal sea waterway belonging to the state of Hamburg and on Hamburg's national territory", no "permission under water law" is required to implement these plans," explained the Hanseatic city's Senator for Economic Affairs, Michael Westhagemann (independent ).

From the point of view of the Hamburg Senate, there is no alternative to the project, at least in the short term: without dredging and the associated dumping, both the Elbe fairway and various harbor basins are threatened with silting up - and the port with it falling into insignificance in the medium term. Not just a disaster scenario from a Hanseatic point of view.

In Lower Saxony and Schleswig-Holstein, too, as the people of Hamburg keep pointing out, numerous jobs depend on the functionality of the Port of Hamburg, as do the jobs of numerous commuters. Not to mention the national importance of the "critical infrastructure" facilities - which was emphasized again and again recently in the dispute over a minority stake by China in one of four major handling terminals.

In this respect, it is no wonder that “dear Peter” Tschentscher has not been on particularly good terms with his northern German neighbors in general and his party friend Stephan Weil in particular since the Lower Saxony coalition agreement became known at the latest. The people of Hamburg accuse the Lower Saxony head of government of strictly rejecting the dumping of silt near Scharhörn, not actually wanting to protect the Wadden Sea in Lower Saxony, but above all the deep-water port of Wilhelmshaven.

Its harbor basin, which went into operation in 2012, is still far from being fully utilized. For this reason, Lower Saxony has been pushing Hamburg for years towards closer “cooperation between German seaports” – a formulation that in the Hanseatic city has almost traditionally been viewed as an attack on its own uniqueness.

Against this background, Weil's letter to Tschentscher and Günther does not sound exclusively accommodating between the lines from Hamburg's point of view. From Lower Saxony's point of view, for a "joint sustainable solution to the silt problem" it is necessary "that both coastal and marine protection issues and the interests of the Port of Hamburg are taken into account". The aim of a solution should be "that we come to a sediment management together that breaks the fruitless cycle of dredging and silt dumping". In other words: things cannot go on as before.

Weil's Economics Minister Olaf Lies (SPD) becomes clearer with a view to the Hamburg dumping plans. Although he also emphasizes the interest in a "joint solution", he also says: "Hamburg underestimates the consistency with which Lower Saxony will defend itself against the dumping of the port silt off Scharhörn. We have prepared all legal steps and will take them if Hamburg clearly sticks to its plans.”

Lower Saxony's Environment Minister Christian Meyer (Greens) is also appealing to the people of Hamburg to distance themselves from their Scharhörn plan. "It's about our common Wadden Sea World Heritage, which we want to protect," says Meyer. Like Lies, he brings up the "deep water speech" in the German Bight as a possible dumping site.

An expensive variant that is at best helpful in the medium term; the current hardship in the Port of Hamburg will not be alleviated in the foreseeable future. The same applies to the proposal to use part of the silt for dyke construction in the future.

It could therefore be an advantage that Schleswig-Holstein should also take part in the forthcoming talks about the future of Elbe dredging. The Kiel state government, which has already removed part of the port silt from Hamburg in the past and most recently dumped it at the "E3" sea buoy not far from Heligoland, could play a mediating role in the conflict between the north German state governments.

"We want to find a good solution," says Environment Minister Tobias Goldschmidt (Greens). The northern German states are an "opportunity area" for sustainable management, for example in the field of energy transition. "We will also master the challenge of harbor silt together."

Unlike the Social Democrat Tschentscher, Hamburg's Green Senator for the Environment, Jens Kerstan, and the non-party head of the Economics Department, Michael Westhagemann, have already signaled concessions to the two neighboring countries. "We have to realize that the depths required for large container shipping cannot be maintained in the long term, despite the recent deepening of the Elbe," said Kerstan WELT. "It is necessary that we make every additional effort to solve this problem."

On December 9th, so it is said in Hanover, the heads of the state and senate chancellery of the three northern countries want to meet first to discuss the conditions of a peace that is as durable as possible in the eternal mud battle around the port of Hamburg.

‹ ›
Keywords:
HamburgExnerUlrichSchleswigHolsteinPeterPreußOlafTschentscherStephanNiedersachsenWeilHäfen
Your comment has been forwarded to the administrator for approval.×
Warning! Will constitute a criminal offense, illegal, threatening, offensive, insulting and swearing, derogatory, defamatory, vulgar, pornographic, indecent, personality rights, damaging or similar nature in the nature of all kinds of financial content, legal, criminal and administrative responsibility for the content of the sender member / members are belong.
Related News