The flood threshold of rivers in the South Puget Sound region is reaching after years of rain and melting snow. The American Red Cross opened a shelter to provide dry refuge for those who need it. 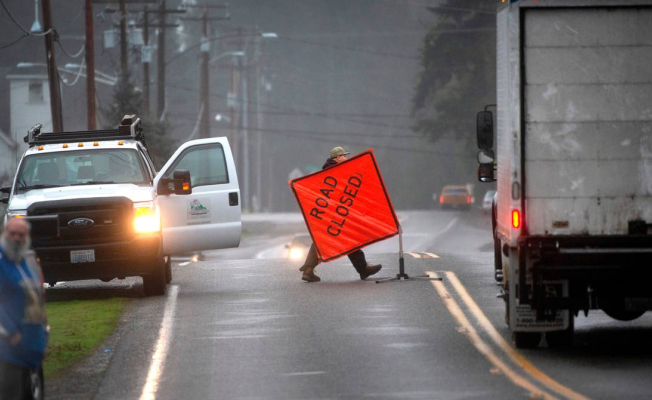 The shelter opened at Centralia Middle School at 901 Johnson Rd at 5 p.m. According to an American Red Cross release, flooding victims in Thurston, Grays Harbor, and Lewis counties should go to the shelter for immediate assistance. The shelter has food, cots, and other emergency supplies.

Thurston County Emergency Management's Ben Miller-Todd said that the shelter would have to be relocated due to flooding and worsening conditions near I-5 in Centralia. He stated that TCEM continues to search for a new location.

Residents can also get sandbags for use in reducing flooding around their homes. You can find a variety of self-service locations. The Thurston County Emergency Management website has more information.

Numerous flooding events are taking place in the region. At 6:45 AM, the Skookumchuck River had reached 215.99 feet. Flood stage is currently at 211.5 feet. The record is 216 feet. According to Thurston County Emergency Management, it is expected to drop below flood stage by Saturday afternoon.

TCEM issued a Level 2 evacuation order for the Chehalis river in Thurston County. As of Friday morning, water levels had reached 169.37 feet. Flood stage is 168.5ft Residents who live near the Chehalis River need to be aware of flooding and the possibility of evacuation, if required by law enforcement. Flood waters from Chehalis usually cover many roads such as SR-12, James, Independence, and Moon Roads. Flooded roads are not recommended for drivers.

After reaching a record height overnight, the Newaukum River near Chehalis reached this morning at 205.59ft. The flood stage is now at 202.5 feet. The previous record was 205.5 feet. Between Saturday and Sunday, the river will likely dip below its flood stage.

At 12.35 feet, the Deschutes River was measured close to Rainier Vail Loop bridge at 6:45 a.m. It was earlier measured at 13.07 feet with the flood stage at 11. feet. There are no evacuations planned for the Deschutes.

Miller-Todd stated that the Skookumchuck and Chehalis rivers will continue to flood and that the Chehalis will likely reach an all-time high. He advised people to be prepared for anything, and suggested that they sign up online for emergency alerts.

Miller-Todd stated that flooding is a serious problem and that nobody wants to have to deal with it. "But we want the people to be as safe as possible."

Floodwaters caused by flooding on I-5's 20-mile stretch between mileposts 68 in Thurston County and 88 within Lewis County have forced the closure of that section. Drivers are not allowed to detour or take short alternate routes. Due to flooding near Twin Oaks, US Highway 6 was also closed.

Due to flooding, there are also roads that have been closed in Tumwater. These include Tyee Drive SW, Trosper Road SW, and Kingswood Drive SW. Over the next few days, additional road closures will be announced.