Rafael Rodriguez, from Ejido is second in the "Aldeilla Mind Breakdown" Championship 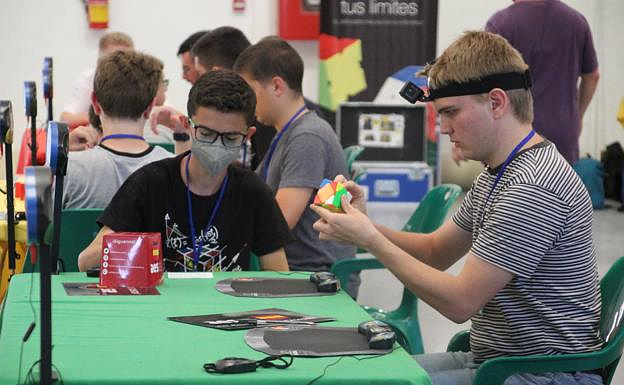 This weekend, the Cultural Center of Santa Maria del Aguila hosted the first Rubik’s cube championship, 'Aldeilla Mental Breakdown’. Official competition, organized by the World Cube Association and supported by Spanish Association of Speedcubing, Rodriguez was second among nearly fifty participants aged 7 to 60 years. Participants came from all over Spain, including people from Argentina, the USA and Germany. Next to him was Mauro Moises Ortega, who was the first classified, and Carlos Mendez who was third.

The participants were competing in seven categories that are quite unusual in rubik’s cube championships. The 3x3x3 Minimum Moves category was the star of the competition. This is where you make a cube with the fewest moves possible. The mixture is provided and competitors have one hour to experiment with it, then study it and come up with a solution.

Rafael Rodriguez has been involved with the cube world for over a decade. I have been proposing a champion in my community for a while, and I have taken this opportunity to be able add the ever forgotten categories of concentration>>. He explained that Aldeilla Mental Breakdown 2022 is the name of the championship. It has categories that require a lot concentration, such as the cube without looking (FMC), making it in fewer movements (FMC), or making many cubes at once (Multi-Blind).

Rodriguez hosted the "IndalOpen 2019" in 2019 in Almeria Capital, the first competition of its kind in El Ejido.

‹ ›
Keywords:
EjidenseRafaelRodriguezSegundoCampeonatoAldeillaMentalBreakdown
Your comment has been forwarded to the administrator for approval.×
Warning! Will constitute a criminal offense, illegal, threatening, offensive, insulting and swearing, derogatory, defamatory, vulgar, pornographic, indecent, personality rights, damaging or similar nature in the nature of all kinds of financial content, legal, criminal and administrative responsibility for the content of the sender member / members are belong.
Related News