Race against time to locate missing after Indonesia earthquake

Several victims were extracted from piles of concrete and metal under collapsed buildings around the town of Cianjur in West Java Island, including a 6-year-old boy on Wednesday evening, who survived two days without water or food. 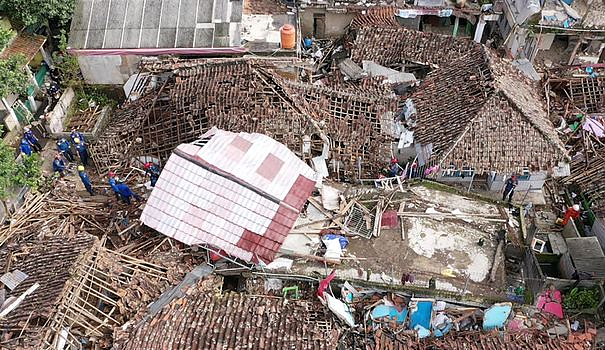 Several victims were extracted from piles of concrete and metal under collapsed buildings around the town of Cianjur in West Java Island, including a 6-year-old boy on Wednesday evening, who survived two days without water or food.

About forty people are still missing, including a little girl that rescuers are trying to find.

The unexpected rescue of the young Azka, six years old, on Wednesday evening, revived hopes. But time is running out since beyond 72 hours after the earthquake, the rescuers consider that the chances of finding survivors are low.

"When we realized Azka was alive, everyone burst into tears, including me," volunteer rescuer Jeksen Kolibu told AFP. "It was very moving, like a miracle."

The boy was found apparently unharmed next to his grandmother's lifeless body. He was saved by a wall that resisted the shaking, preventing another wall from collapsing on top of him, local media reported.

More than a third of the victims of this earthquake are children, who were at school or at home when the earthquake occurred, according to the disaster management agency (BNPB).

In Cugenang district, which has suffered the most damage, rescuers try to break through concrete slabs and remove tiles from a ruin to find a seven-year-old girl, Cika, under the anguished gaze of her mother .

"She was playing outside, I was preparing the meal in the kitchen when the earthquake happened. Very quickly, in two seconds my house collapsed," said the mother, Imas Masfahitah, 34, at the AFP.

"My instinct tells me she's here, because she liked to play here," she said, pointing to the grandmother's house where the rescuers are at work.

"Whatever happens, I will try to accept it".

The latest toll, announced Wednesday evening, of 271 dead, could still increase, while 2,000 people were injured in the natural disaster.

Two villages are still isolated after roads were cut. Thousands of military and police have been deployed to assist rescuers with bulldozers and helicopters to aid stranded victims.

Thirty-nine people are missing in Cugenang locality, he said. "This afternoon we are going to focus on this site," he told reporters.

- Tens of thousands of displaced people -

More than 61,000 people have been displaced by the earthquake. The government is providing food aid and tents, but the needs are immense and the hospitals are overwhelmed.

The authorities have also warned of the risk of another natural disaster in the region. Storms are likely to cause flash floods or landslides because of the piles of debris left by the earthquake that the relief workers are trying to clear.