Pyrenees: controversial closure of the cross-border road of the Col de Banyuls

This closure aimed at combating terrorism and illegal immigration is "an administrative absurdity", loose Pierre Becque, president of the Albères association (the massif where the pass is located, editor's note) without borders, his hand leaning on one of the boulders put in place at the pass to block the road. 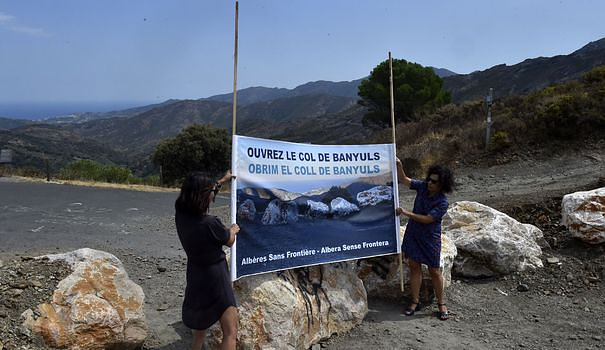 This closure aimed at combating terrorism and illegal immigration is "an administrative absurdity", loose Pierre Becque, president of the Albères association (the massif where the pass is located, editor's note) without borders, his hand leaning on one of the boulders put in place at the pass to block the road.

For José Rueda, a 32-year-old Spanish Catalan who has been harvesting grapes for seven years near the small French town of Banyuls-sur-Mer, "coming over the pass was very easy. Now we spend more on petrol. Some came to work for the day and went back to sleep in Espolla or Figueras", on the Spanish side. "Those don't come anymore," he adds regretfully.

While Spanish border or seasonal workers went through the pass to save time, many inhabitants of Banyuls took the small road to do their shopping on the Spanish side and buy cigarettes or alcohol there at a better price.

The mayor of Banyuls-sur-Mer, Jean-Michel Solé, denounces "an attack on individual and commercial freedoms" and recalls the "strong links" between his town and Espolla, one of the Spanish villages near the pass.

In the town hall, the mayor of Espolla, Carles Lagresa, is flanked by the Catalan flag. "We are neighbours. This passage allowed us to be in contact with the entire coast of northern Catalonia," he told AFP, referring to the seaside resorts of French Catalonia, Collioure, Banyuls, Argelès-dur- Sea.

"Myself, I have family in Banyuls, even if it is a bit far away. And my great-uncle is buried there," he adds, also recalling the loss of earnings for traders.

Behind the counter of the tobacco bar in Espolla, Cristina Juanola confirms: "People from the Banyuls area, who used to go through the pass" now do so through the border crossings of Port Bou or La Jonquère, and s 'stop at the tobacco or coffee shops there,' she laments.

Like other prefects of the Pyrenean departments, that of the Pyrénées-Orientales banned from January 11, 2021 traffic on five border crossings, including the Banyuls pass, citing "the terrorist threat" and "sustained movements" of immigrants.

This ban followed the arrival in the department, on November 5, 2020, of President Emmanuel Macron who had announced a tightening of border controls.

From Espolla to the pass, the journey by car takes about fifteen minutes. The road winds through the vineyards and the scrubland, before arriving at the blocks cutting the passage. Another quarter of an hour would be enough to reach Banyuls-sur-Mer.

By other roads, it takes between an hour and an hour and a half, depending on the season, to Espolla-Banyuls.

In practice, pedestrians, bicycles and even some vehicles can pass through the pass, despite the rocks erected across the road. Arrived on the French side, a 4x4 driver gives a few turns of the wheel, backs up for a few meters, then passes on the Spanish side by a small very steep track.

"These blocks don't stop anything at all", comments Pierre Becque immediately, judging it unlikely that illegal immigrants or terrorists will take this passage, with or without blocks.

A few meters further on, on the French side, a plaque recalls that Spanish refugees fleeing the dictatorship of Francisco Franco (1939-1975) entered France through there.

Then, during the Second World War, people refusing compulsory labor imposed by the Nazis, or persecuted Jews, fled through this border point, but in the other direction, specifies Pierre Becque.

"In Franco's time, we could pass. Now, the French Republic forbids it", summarizes in his own way Jacques Solane, another member of the Albères without borders association.