This announcement comes in a context of tense inter-Korean relations. 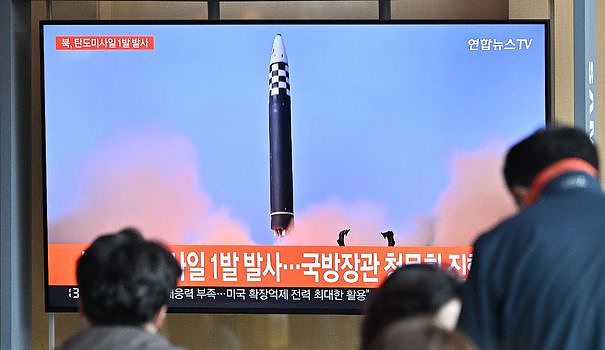 This announcement comes in a context of tense inter-Korean relations. Pyongyang has conducted a record number of missile tests this year, and has blamed Seoul for the recent Covid-19 outbreak that hit the country.

This law will allow the North Korean regime to launch a preventive nuclear strike "automatically" and "immediately to destroy hostile forces" if a foreign power were to threaten Pyongyang, according to the state agency KCNA.

With this new text, "our country's status as a nuclear-weapon state has become irreversible," North Korean leader Kim Jong Un said, according to KCNA.

In July, Mr. Kim said that his country was "ready to deploy" its nuclear deterrent force in the event of a military confrontation with the United States and South Korea.

"It is totally out of the question (for us) to renounce nuclear weapons, and there can be no denuclearization or negotiation," he said in a speech to the North Korean parliament on Thursday, according to KCNA.

This new text testifies to Kim Jong Un's confidence in his country's nuclear and military capabilities, in particular in its intercontinental ballistic missiles that can strike the United States, Cheong Seong-chang of the northern studies center told AFP. -Koreans at the Sejong Institute.

This law "publicly justifies the use of nuclear weapons by Pyongyang", in particular in response to a non-nuclear attack, observed Mr. Cheong.

North Korea has carried out a record series of weapons tests this year, including firing an intercontinental ballistic missile for the first time since 2017.

US and South Korean officials have repeatedly warned that the North is preparing to conduct another nuclear test.

The unresolved question of sanctions relief and what Pyongyang would be willing to give in return has stalled negotiations between Washington and Pyongyang since 2019.

For Yang Moo-jin, professor at the University of North Korean Studies, the new text clearly reaffirms the position of Pyongyang, which believes that negotiations on denuclearization are no longer on the agenda.

"Pyongyang is likely to forge closer ties with China and Russia against Washington, and ... conduct a seventh nuclear test in the near future," he told AFP.

Last month, Seoul offered a major aid package to North Korea, including food, energy, but also aid for the modernization of infrastructure, in exchange for denuclearization.

North Korea, however, rejected the offer, calling it "the height of absurdity".

South Korean President Yoon Suk-yeol said last month that his government had no plans to provide the country with a nuclear deterrent.

At the end of August, the United States and South Korea conducted their largest joint military exercises since 2018 in the face of the growing nuclear threat from North Korea.

Washington is a close security ally of Seoul. Some 28,500 American soldiers are stationed in South Korea to protect it from its neighbor.