Public transport between the return of passengers and fears for energy 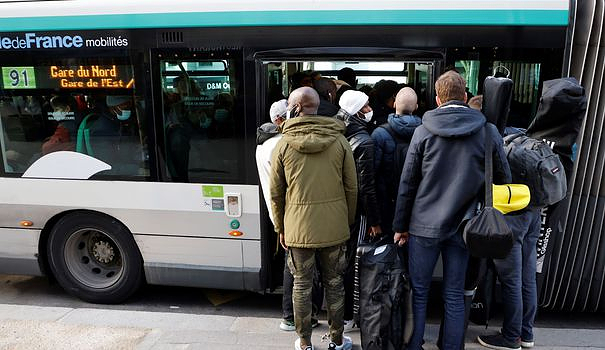 "People have returned. In the provinces in any case", rejoices Edouard Hénaut, general manager for France of the operator Transdev which operates, among other things, the trams of Montpellier, Nantes and Saint-Etienne.

He estimates that attendance varies by city "between 90%, 95% and 100%, or even more" compared to the level of 2019 before the health crisis. "Where the networks have put more supply, we are well beyond 100%, as for example in Rouen."

"At the rate things are going, we could be in the fourth quarter a little above the attendance of 2019, except for a new wave of Covid", adds Frédéric Baverez, executive director France of Keolis, a subsidiary of the SNCF which manages the networks from Lyon, Lille and Rennes.

The situation is less brilliant in Ile-de-France. The level of attendance rose slightly in September but remains at 85% during the week, during a score at the end of the month. And 90 to 95% on weekends.

“More telework in Ile-de France?” Asks the user association Plus de trains. "A lack of reliability that diverts users? A saturation in 2018-2019 that we no longer want to relive?"

"With (...) many other user associations, we have been alerting the public authorities for months to the deterioration of our public transport. Without success for the moment", regrets the Ile-de-France association.

The left-wing opposition and user associations accuse the president of Ile-de-France Mobilités (IDFM), Valérie Pécresse, of having reduced the offer to save money.

Added to this were numerous "operational incidents" in the metros, trains and RERs which exasperated the travellers. And a real mess on the bus network, for lack of drivers. Especially in the heart of the Paris conurbation, 25% of RATP buses did not run in September!

The big topic at the moment is finding bus drivers. Some 4,000 positions are currently vacant in urban transport in France (out of 55,000), according to UTP, the operators' club. The RATP is looking for around 800 drivers, Transdev and Keolis 500 each.

The profession therefore promises to put the package to recruit.

"Our main concern is the price we will pay next year, and to what extent this price will be correctly reflected (...) in our contracts", indicates Frédéric Baverez at Keolis. Clearly: how communities will bear the rising costs.

"In 2023, we have already bought 70% of our electricity. Depending on the price at which we buy the remaining 30%, we can have a price that will wander between 250 and 350 euros per megawatt hour", against 51 euros last year, explains the manager.

Like his colleagues, he is waiting to learn more about the state's strategy. In any case, "the prefects understood that the metros and trams had to be supplied" even in the event of power cuts, he reassures.

Communities, with finances already battered by the health crisis, will they not ask to lower the frequencies to save money?

“There are some who ask us for simulations, but for the moment the urban organizing authorities have not proactively asked for savings in supply to save money in euros”, testifies Mr. Baverez.

"There are still communities that tell us we are pressing the accelerator in the name of ecological transition", adds Edouard Hénaut at Transdev.

In Ile-de-France, Valérie Pécresse is looking for 750 million euros next year to cover inflation and rising energy costs.

Not considering an additional reduction in the supply of transport, it wants to involve the departments, the RATP, the SNCF, the State (via a reduction in VAT on tickets) and companies (via an increase in "mobility payment", a tax on wages). The last two subjects will be discussed in Parliament during the vote on the budget.

The Navigo monthly subscription could pass without these new recipes from 75.20 to 100 euros, according to IDFM.