Psychiatrists, liberal doctors, biologists ... The mobilizations of caregivers are linked

This Tuesday, November 29, psychiatrists are on strike. 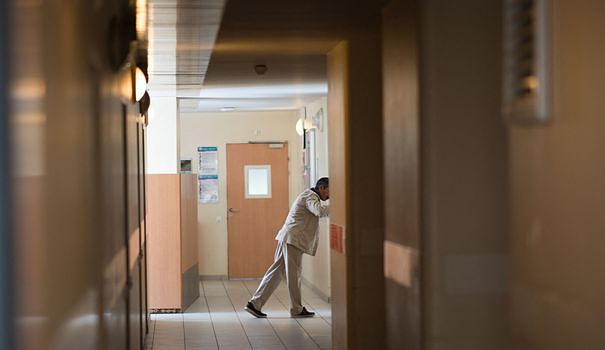 This Tuesday, November 29, psychiatrists are on strike. Two days before doctors and biologists, who plan to close practices and laboratories on December 1 and 2. The medical sector is angry, as the Social Security financing bill for 2023 was adopted on Friday, after the government used Article 49-3 of the Constitution. The background of discontent is common, the nursing staff considering themselves neglected by the State. But the demands differ according to the sectors.

For the opening of new beds and against the closure of medico-psychological centers, psychiatrists are on strike this Tuesday, worried about being "abandoned by the State", in the words of the inter-union defense of psychiatry public, Idepp. The hardening of working conditions keeps young doctors away from the sector and, according to the unions, "five out of six hospitals" are currently short of staff. In the Paris region alone, Idepp deplores a deficit of 50 interns. The consequence is "an inability to treat as we would like", deplores Norbert Skurnik, the president of the inter-union, who specifies that "in Ile-de France alone, 60,000 to 70,000 sick people wander outside any institution ".

In September 2021, a plan had however been announced by the government. In particular, it provided for the creation of 800 positions in medico-psychological centres. But professionals in the sector have always considered the measure insufficient, organizing a mobilization last June. Faced with the negligence of the government, the unions are returning, at the end of November, to the charge. They are calling for a 20 to 25% increase in the salaries of hospital psychiatrists, more recruitment and the reopening of beds that have been cut. Without this, the risk of a “public health disaster” is real, the Covid-19 epidemic having generated an overload of work for psychiatrists, “with waves of adolescents admitted for suicidal gesture, major anxiety, depression ...", explain the unions. However, because of the “state of disrepair” in which French psychiatry finds itself, their proper care cannot be assured.

This Thursday December 1 and Friday December 2, the liberal doctors will be on strike, in order to protest against the deterioration of the working conditions which they have to face: administrative overload, lack of means... It is the first time since 2015 that all the unions of liberal doctors unite in a movement of mobilization. They demand the doubling of the price of consultations (from 25 to 50 euros), and intend to weigh in the negotiations with the Health Insurance, while a new agreement must be signed for the next five years.

Also, liberal doctors are concerned about the proposed law on medical deserts, which intends to challenge the freedom of installation of general practitioners. They fear that such a measure will further discourage young people from opting for city medicine. The young doctors unions and the National Intersyndicale of interns demand "consideration", opposing "political decisions disconnected from reality". These two days of strike could be a prelude to a mobilization of greater magnitude, envisaged from December 26.

The medical analysis laboratories will be closed on Thursday December 1 and Friday December 2, in order to protest against "the planing of 250 million euros per year", included in the Social Security budget for 2023. The biologists are in favor of an exceptional drain of 250 million euros, due to the profits made over the past two years thanks to Covid tests. But they refuse that this levy concerns all the acts of analysis, and especially that it is recurrent. On November 14, a first mobilization was very well attended, with 95% of liberal biologists on strike and 4,200 laboratories closed. The union of clinical biology laboratories fears that the government's "austerity madness" will endanger "at least 10% of the sites and the associated jobs".