Protest in China at the world's largest iPhone factory

The factory is located in Zhengzhou, capital of central Henan province. 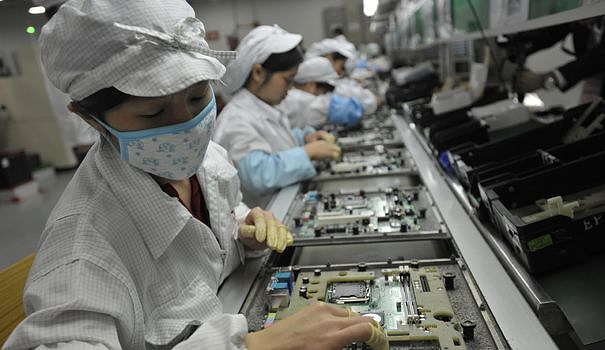 The factory is located in Zhengzhou, capital of central Henan province. It is a huge industrial site which generally employs some 200,000 people, most of whom live on site in dormitories.

Certain categories of people, in particular students and workers, are sometimes confined for many weeks in a row to campuses or production sites, without the possibility of moving freely.

Footage of the protests, which AFP was unable to verify, shows a crowd of workers marching down a street. Some face people in white full body protective suits and riot police.

In other footage, hundreds of people in the white coveralls can be seen standing on a road near what appear to be the factory dormitories.

The person filming from an adjacent building says, "It's starting again. It's from last night and until this morning."

Another video clip apparently shows security guards kicking a person who appears to be a worker lying on a road.

And on a video broadcast live, at night, dozens of workers shout "Let's defend our rights!" in front of rows of police and a police vehicle with flashing lights.

Then the author of the video yells "they're charging!" and "tear gas bombs!".

A video clip of the same nighttime protest, taken from a different angle, shows workers setting off fire extinguishers at police officers outside of camera range.

A photo taken during the day shows the charred remains of a portal, apparently burned during the night.

Foxconn is a large group that assembles electronic products for many international brands.

The Taiwanese company, Apple's main subcontractor, has been faced in recent months with an increase in Covid-19 cases at its huge Zhengzhou site.

Foxconn had decided to confine the area, with the workers inside.

But hundreds of panicked workers then fled on foot, some complaining of the chaos and disorganization reigning there.

To keep the factory afloat, the company offered large bonuses to the remaining employees and tried to recruit new workers.

US giant Apple, whose flagship iPhone is the iPhone, admitted in early November that the site's lockdown had "temporarily affected" factory production, a blow ahead of the holiday sales period. .

Foxconn is the largest private sector employer in China, with more than one million employees across the country in about 30 factories and research institutes.

The Taiwanese group did not immediately respond to a request for comment from AFP.