She brings the trophy back to her country, four years after the Enable champion's double victory (2017-2018). 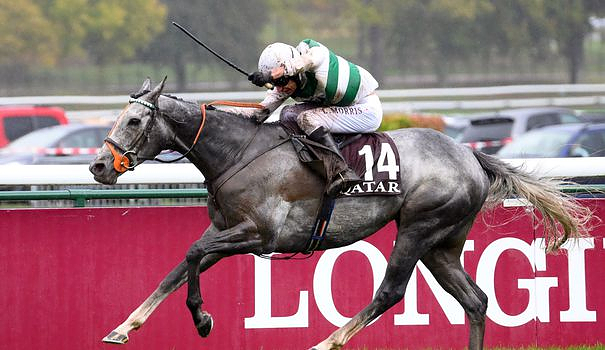 She brings the trophy back to her country, four years after the Enable champion's double victory (2017-2018).

Waiting along the rope in 5th position in a very rhythmic race led by the Japanese Titleholder, Alpinista made his effort 400 meters from goal to overtake the host. Then, 200 meters from the line, she beat all her pursuers to win with all her class.

Undefeated in all her other races since April 2021 and well placed in the starting boxes with number 6, Alpinista thus confirms her skills on very soft ground.

"Every time she runs she is better. I am very happy," said her trainer Sir Mark Prescott, the man with more than 2,000 winning horses who thus signs a first success in the queen gallop event.

“We want her to return to stud but before that maybe she will run in the Japan Cup and the Breeders cup,” he continued to the press. "If she wins the Japan Cup, it's a bonus of 3 million, for the mare, it warms my heart".

"She is really very special. It's exceptional," said Luke Morris on arrival after having also transformed his first try in the Arc.

The little gray mare offered her owner Kirsten Rausing the 2,857,000 euros promised to the winner, out of the 5 million total allocation.

"I was walking like a caged lion before the race, I'm on cloud nine," she said, "thrilled to have bred this sixth-generation filly."

In this mythical race, sponsored by Qatar and contested by 20 French, English, Irish, German and Japanese thoroughbreds, second place went, half a length away, to the 3-year-old French colt of the Aga Khan Vadeni. years old and piloted by the Belgian Christophe Soumillon.

"He did a great race, halfway through the straight I thought I was going to win but the mare is hard as a rock. It's a bit frustrating", commented Christophe Soumillon.

"Vadeni would have won a few meters further," assured his trainer, Jean-Claude Rouget, saying he had "nothing to blame him for". His other resident, Al Hakeem, ridden by Italian Cristian Demuro, finished 4th.

The German Torquator Tasso, winner last year and entrusted to the Italian Lanfranco Dettori finished third, after a good effort in the last 200 meters.

As for the Japanese, they have still not managed to win for their 30th participation since their first attempt in 1969 with Symboli Speed. Their dream once again turned into a nightmare. They had however lined up four horses at the start, a record.

Japanese horses that usually race on flat tracks and good ground were likely disadvantaged by the deep track, like their favorite Titleholder who finished 11th.