According to the latest official data, French prisons had 72,350 prisoners for some 60,000 places on October 1, i. 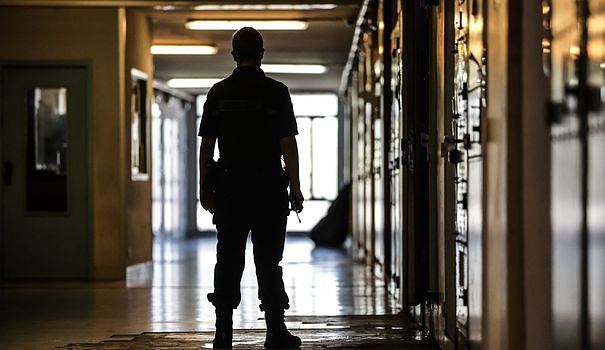 At the current rate of progress, the absolute record of 72,575 incarcerated people reached in March 2020 on the eve of the country's lockdown, should soon be exceeded.

An evolution that runs counter to that of France's European neighbors, who have seen their incarceration rate decline in ten years, particularly in Germany (-12.9%) and the Netherlands (-17.4%).

"There is a French repressive exception", judge Matthieu Quinquis, president of the International Observatory of Prisons (OIP), and this "crazy increase in repression does not correspond to an increase in delinquency".

In France, "prison remains the queen of sentences", also notes Dominique Simonnot, the general controller of places of deprivation of liberty (CGLPL), who protests against a "French passion for locking up".

In a speech in Agen in 2018, Emmanuel Macron himself regretted that imprisonment remains "the solution which symbolically satisfies the most people, which avoids questioning the meaning that it covers".

Union organizations and associations have since deplored the lack of "political will" to stem this chronic overcrowding, which the European Court of Human Rights (ECHR) had described as "structural" when condemning France in January 2020.

In its "action plan" against prison overcrowding addressed to Europe, the French government highlights the construction of 15,000 new prison places by 2027 and assures that the increased use of alternative measures to detention "will produce all its effects in the coming months".

"Sixty pages to say that everything is fine. It's a permanent incantation", mocks Matthieu Quinquis.

The new scale of sentences which came into force in March 2020, which aims to limit short sentences, which are major providers of imprisonment, is a "missed appointment", politely notes a former prison director.

In three years, the quantum of sentences pronounced has "increased by 11%" and the use of pretrial detention - before judgment - remains "extremely important", notes the president of the OIP.

A recent study by the Prison Administration showed that between 2015 and 2019, the increase in the number of detainees was mainly linked to the increase in pre-trial detention (17.4% in five years) and the growth in average length of incarceration of defendants.

The Ministry of Justice invites to "temper" the impact of pre-trial detention. "It is actually the length of imprisonment of convicts that most influences the upward trend," he says.

This "results in a significant increase in the number of years of imprisonment pronounced", of the order of "2% in 2022 compared to 2021", we note Place Vendôme.

The latest reforms "still require a period of appropriation", pleads the Chancellery.

"We lost on both counts," regrets Alice Maintigneux, president of the National Association of Sentence Enforcement Judges (Anjap).

"The expected effects in terms of the development of community service sentences (TIG) have not succeeded and the ab initio sentence adjustments (from the hearing) supposed to bite into prison have bitten into the other alternatives".

The judges are also torn between the injunction to "empty the prisons" and the creation of new offenses or the aggravation of their repression, underlines the magistrate.

"If the political objective is to limit prison overcrowding, we must be given the legal tools to do so", agrees Samra Lambert, of the Syndicat de la magistrature (SM, left).

Along with others, the union has long campaigned for a national and binding regulatory mechanism that would limit the occupancy rates of each prison to 100%.

Several systems have been tested, particularly in Grenoble where the alert threshold had been set at 130%. But without binding value, they were "doomed to failure", says the National Union of Prison Directors (SNDP-CFDT).

While the Keeper of the Seals Eric Dupond-Moretti must unveil his "roadmap" at the end of November after the States General of Justice, there is "an opportunity to be seized", hopes Alice Maintigneux.