Almeria was swept by the colors of rainbow on Saturday afternoon. 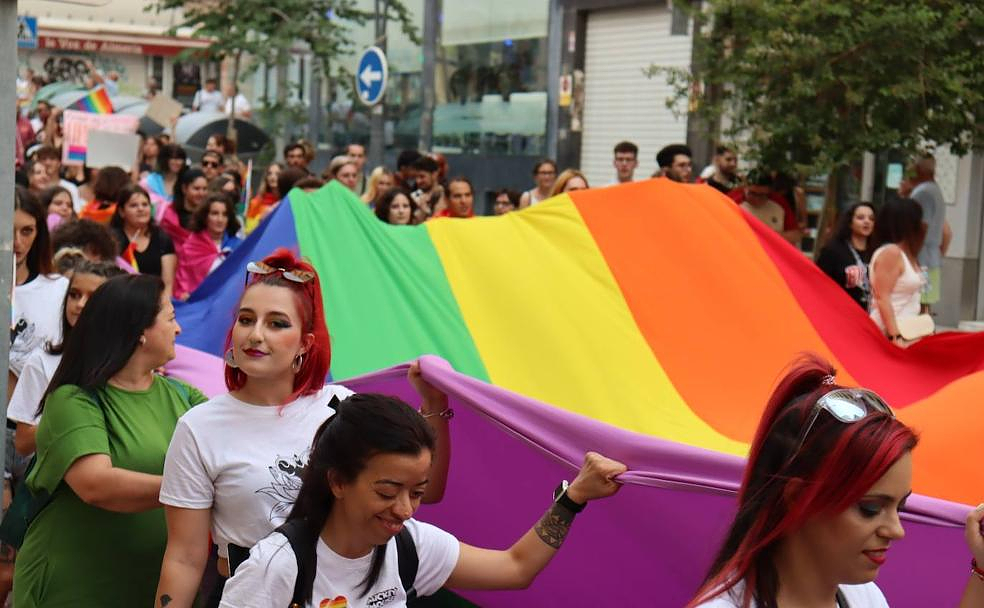 Almeria was swept by the colors of rainbow on Saturday afternoon. While the LGTBI Pride march marched through the streets in protest, there was still time to celebrate. People of all orientations rose to support the group by waving the slogan "For an Almeria without LGTBIphobia" as their flag. The day also had an added incentive because it was finally possible to celebrate the event with greater force after two years of restrictions on large events due to the health limitations of pandemic.

A batucada, trucks, and floats were responsible for animating the party during the tour. Their goal was to make Almeria more welcoming and respectful of all, regardless of sexual orientation, gender identity, or expression.

Colega Almeria promoted the march. This association has been active in the province for over 22 years for real and effective equality for Lesbian, Gay and Bisexual people. It once again organized Pride with the Almeria entity Families for Diversity of Almeria with the support from the Andalusian Federation LGBTI associations and Andalusia LGBT Diversity. They gathered all the support they could to stop the aggressions that keep many people from having a life that is true to their identity>>.

It began with a commemoration of "those spontaneous demonstrations which arose as the result of the Stonewall events that took place in New York 53 year ago." A legacy that has led to a community marked by "a constant struggle for their rights and a constant pursuit of equality." They also called for the establishments to develop policies, plans, and actions in the province that promote non-discrimination toward our group in all social and educational spheres, workplaces, families, media, and workplaces. This would ensure the constitutional mandate of "no discrimination on the basis of birth, race, religion, gender, or any other personal or social condition." It is "very important" that the Trans Law and the LGBTI Law are in force.

They argued in the manifesto that they must "continue to take steps to ensure that legal equality is real equality." The fight must also include a mention of current challenges, including continuing to promote diversity, particularly from childhood. The text said that comprehensive and mandatory sexual affective education should be included in public education.

They also wanted to mention "our LGBTIQ elders" who, from the beginning, fought against social injustice and discrimination. These were those who, with unity in action, criteria, and discourse, managed to avoid the invisibility or forgetfulness of the group, often enduring hatred and violence.

It is essential to promote "an inclusive feminist movement where no one is excluded and everyone is heard" in order to achieve this goal. We will defend gender self-determination in this group and prevent inequalities, especially towards trans and migrant minors who are the most in need of our support.

Colega Almeria is a group that defends and proclaims the diversity of the plural and says enough is enough for hate crimes that have their origin in identity or sexual orientation. While rights may appear to be guaranteed, they are constantly at risk, as is evident in the many attacks in Spain against LGTBI persons just for being there.

The two Pride revelers killed in Oslo during Pride celebrations were also remembered. 21 people were injured. The manifesto was ended by he declaring that Pride is for all letters, gay, lesbians, trans, intersex and asexual and for all forms of diversity.

This was how the march turned out. / D.R.

Almeria City Council was not happy to be excluded from the protest day. They stated that they had been strengthening the institution's work with the LGBTIQ community by launching awareness and information campaigns to defend their rights and promote an equal and fair city. To combat homophobia, biphobia, and transphobia, it is essential to commit to inclusion, respect, and eliminate hate behavior and violence based upon sexual orientation.

The party was held in the Parque de las Almadrabillas after the vindictive moment. They had 14 Drag Queens to perform and they also used the music of DJ Pasky Adams, Rebeca Moss and the Witch of Funk for the show.

This party was the culmination a LGTBI Pride Week that included many activities all with the common goal of raising awareness among Almeria about the LGTBIQ community. It promoted integration and non-discrimination for people based on their sexual orientation or gender identity. It is not easy to create an Almeria open to the issues faced by the LGTBIQ community every day. It is important that we celebrate and promote this week every year.

‹ ›
Keywords:
ProtestaFiestaMarchaOrgullo
Your comment has been forwarded to the administrator for approval.×
Warning! Will constitute a criminal offense, illegal, threatening, offensive, insulting and swearing, derogatory, defamatory, vulgar, pornographic, indecent, personality rights, damaging or similar nature in the nature of all kinds of financial content, legal, criminal and administrative responsibility for the content of the sender member / members are belong.
Related News