Presidential in Brazil: decisive television debate with Lula and Bolsonaro

This debate should be followed by tens of millions of viewers on TV Globo, the largest channel in the country. 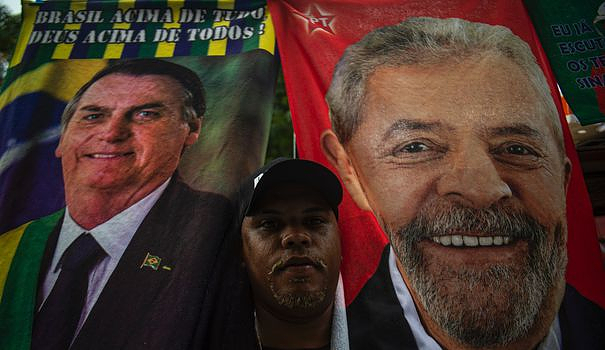 This debate should be followed by tens of millions of viewers on TV Globo, the largest channel in the country. It is perceived by the two candidates as the last chance to attract the votes of the undecided.

It will see a total of seven candidates compete, out of the 11 in the running.

According to a poll published Thursday by the Datafolha institute shortly before this third and final televised debate, Luiz Inacio Lula da Silva retains a comfortable advantage over Bolsonaro, with 48% of voting intentions against 34% for the current president, and can still hope to win in the first round.

"It's the debate that can change things," a source from Bolsonaro's campaign told AFP, about the confrontation scheduled from 10:30 p.m. (01:30 GMT Friday).

According to Datafolha, 14% of Brazilians have not yet decided who to vote for on Sunday.

Lula's Workers' Party (PT) is campaigning among Brazilians for the "useful vote" to grant a third mandate to the old lion of Brazilian politics in this first round.

A second round is scheduled for October 30 if no candidate obtains more than 50% of the valid votes (excluding null and blanks).

According to Datafolha, Lula is credited with 50% of valid votes in Thursday's poll, a score within the poll's margin of error (2 percentage points).

A source from the PT campaign assured AFP, on condition of anonymity, that the team was "confident, while ready for a second round".

Center-left candidate Ciro Gomes, third in the polls and credited with 6% of voting intentions, was under pressure to step down to facilitate Lula's victory. But Mr. Gomes assured that he would go all the way.

Right-wing senator Simone Tebet, in fourth position in the polls and whose performance during the first debate had been hailed, collects 5% of voting intentions and also represents a pool of potential voters.

For its part, Bolsonaro's team sees the debate as a delicate moment and advised the president-candidate to appear less aggressive than during the first debate, according to the Brazilian press.

The president had come under fire after his sexist attacks on one of the journalists who interviewed him. New misogynistic remarks could cost him dearly three days before the election, while the female electorate is fleeing him.

But he got some strong backing on Thursday: Brazilian soccer superstar Neymar, who openly declared his preference in a video posted on TikTok.

After a performance judged disappointing by commentators during the first debate - he had notably failed to defend himself against accusations of corruption launched by Jair Bolsonaro - Lula did not participate in the second debate, citing an already very busy schedule. charged.

A sign of the importance attached to this confrontation, the two candidates spent Thursday preparing for it and have not planned any other event.

Jair Bolsonaro, who for months has questioned the reliability of voting by electronic ballot box, left the threat of a challenge to the result on Sunday evening.

"We are in the majority, we will win in the first round," he assured last weekend during a meeting.

The electoral campaign on radio and television must end this Thursday at midnight, but meetings and the distribution of leaflets will remain authorized until Saturday evening, the day before the election.