Presidential in Brazil: Bolsonaro harangues his "army" of activists

Felipe Vicente Alves, in the middle of the crowd massed in Juiz de Fora, in Minas Gerais (southeast of Brazil), near the platform planted on the exact place where Jair Bolsonaro had been stabbed by a lunatic four years ago years, remembers this September 6, 2018 well. 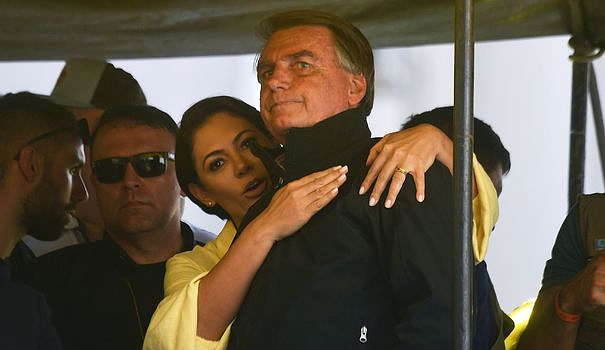 Felipe Vicente Alves, in the middle of the crowd massed in Juiz de Fora, in Minas Gerais (southeast of Brazil), near the platform planted on the exact place where Jair Bolsonaro had been stabbed by a lunatic four years ago years, remembers this September 6, 2018 well.

"I was right here, I was following the procession and I saw the people gathered around him to help him," says the 41-year-old insurance broker who proudly wears a yellow jersey from the Brazilian football team.

"It was really shocking! Afterwards I spent the day praying for him", he says, considering "really symbolic" that Jair Bolsonaro is launching "his campaign here", at the place where he came close to the dead.

The man says he is "confident" in the result of the presidential election on October 2: "I think he will win in the first round" even if in the latest polls the head of state is far behind his rival. , the left-wing ex-president Luiz Inacio Lula da Silva.

But this pure and hard bolsonarist does not believe in polls: "they are manipulated", he decides, saying he knows what he will do "if the result is not what we expect".

"If we have to fight for our country, we will do it, with weapons if necessary. Wherever Bolsonaro goes, there are huge crowds. It is normal that the candidate most followed by the people wins. Otherwise, there's something wrong with it," he said.

His brother, Carlos Henrique Augusto, wants to be more moderate: "we don't want civil war, we mustn't believe that all Bolsonarists are armed and shoot people anyhow. We just want citizens to have the right to have arms for self-defense".

"I have a weapon and I won't hesitate to use it," said Joao Vitor Ferreira, a 39-year-old mixed-race man with close-cropped hair who came to this meeting to launch the official campaign with his wife and his wife. 9 year old girl.

Jair Bolsonaro, repeating at will that "the people" are his "army", continues to question the system of electronic ballot boxes.

Some fear that he will challenge the result of the ballot in the event of defeat, risking provoking scenes of violence, such as those on Capitol Hill in Washington by supporters of Donald Trump in January 2021.

In the crowd of Bolsonarists, a man also drew cheers by waving a "Trump 2024" flag.

"Let's not deliver our country into the hands of our enemies," chanted in turn the First Lady Michelle Bolsonaro, ovation at her appearance in public.

At the end of her speech filled with biblical references, she asked the audience to close their eyes to recite the "Our Father".

"Bolsonaro is a president who defends the Christian faith, family values," says Pamela Lima, 22, a student who came with a group of young people from her evangelical church.

For Conceiçao Nicolatino, 80, Bolsonarism is not at all a family affair. Her son, who lives with her and her three grandchildren, is a voter of Lula.

"Whatever, I put on my yellow t-shirt with a photo of Bolsonaro and I walked past him, in the middle of the living room. We get on well anyway," she says.

This elderly woman with dyed red hair and shoulders covered in a Brazilian flag walks on a crutch but did not hesitate to brave the crowd to see her favorite candidate.

Sitting on a chair to follow the meeting sitting in the middle of the activists, she says she likes Jair Bolsonaro "his way of being, of speaking, his spontaneity".

"He doesn't need a script, he says what he thinks. And when he says swear words, it doesn't bother me, I say them too!", She smiles.