Presidential election in Kenya: Odinga appealed to the Supreme Court

A historic figure in the opposition supported for this election by outgoing President Uhuru Kenyatta, Odinga had announced his intention to contest the results announced by the electoral commission (IEBC), which he had described as a "parody". 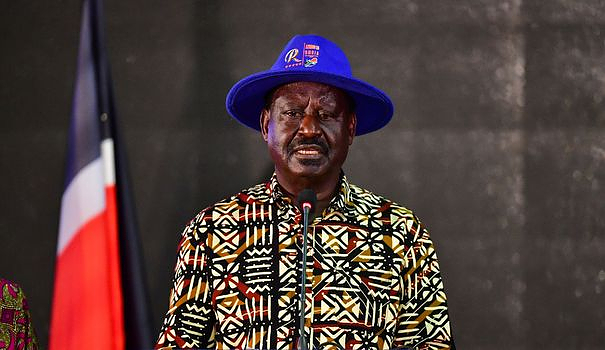 A historic figure in the opposition supported for this election by outgoing President Uhuru Kenyatta, Odinga had announced his intention to contest the results announced by the electoral commission (IEBC), which he had described as a "parody".

The appeal "has already been sent to them (to the Supreme Court)" online, Daniel Maanzo, who is part of Odinga's legal team, said Monday morning, adding that "a physical copy must arrive before 2:00 p.m." ( 11:00 GMT), the deadline for filing an appeal.

"We hope we have built a good case and that we will win," he added.

Kenya's highest court has 14 days to render its decision and, if the poll is annulled, a new election must be held within 60 days.

On August 15, the proclamation of the results by the president of the IEBC gave rise to a split within this independent body in charge of organizing the ballot.

Four of the seven commissioners had announced that they were rejecting the results a few minutes before their announcement, criticizing the president of the IEBC, Wafula Chebukati, for his "opaque" management and his lack of consultation.

Mr Chebukati denied the charges, saying he exercised his prerogatives in accordance with the law of the land despite "intimidation and harassment".

According to the request consulted by AFP, the Odinga camp affirms in particular that 140,028 ballots were not taken into account and that "this significantly affects the final results insofar as none of the (...) candidates reaches the constitutional threshold of 50% 1 vote" to win the election in the first round.

Other appeals will also be considered by the seven judges of the Supreme Court. A clerk told reporters that a petition filed by an individual had been received. Others are expected.

On Monday morning, hundreds of Odinga supporters gathered outside the Milimani High Court in Nairobi, where the appeal was to be filed, including waving signs reading "Electoral Justice Now!" in English and "Democracy Now" in Kiswahili.

"Odinga has to win for us to get the 6,000 shillings ($50 monthly payment for vulnerable households, editor's note) promised in its program," said a man wearing a wreath made of plants.

Another knelt down, a green Bible in his hand, in front of the police force deployed to guard the premises of the court.

The August 9 elections were peaceful, but the announcement of the results sparked brief angry protests in some strongholds of Odinga, Kisumu (west) and the capital.

Observers fear a protracted legal dispute could plunge the country into the post-election turmoil it has experienced in the past.

Since 2002, all presidential elections in Kenya have been contested, sometimes resulting in bloody clashes.

77-year-old Raila Odinga, who was beaten in his four previous presidential bids, is familiar with these legal challenges, which he filed in 2013 and 2017.

In 2017, the Supreme Court invalidated the presidential election due to "irregularities" and ordered the holding of a new election, a first in Africa.

In 2007, Odinga had also, without going to court, refused the result, which had triggered the worst post-election crisis in the country's history, with more than 1,100 dead in inter-ethnic clashes.

During the election campaign, the two favorites William Ruto and Raila Odinga pledged to resolve any disputes in court rather than on the street.

After the announcement of the results, Odinga praised his supporters for "remaining calm" while Ruto adopted a conciliatory tone and promised to "work with all the leaders".

If the Supreme Court upholds the results, William Ruto will, at 55, become Kenya's fifth president since independence in 1963.