Presidential election in Kazakhstan after a dark year

Nearly twelve million voters are called to go to polling stations, which opened in most regions of the largest country in Central Asia at 01:00 GMT and will close at 15:00 GMT. 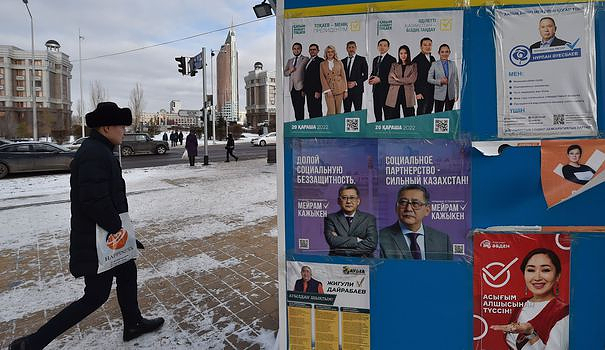 Nearly twelve million voters are called to go to polling stations, which opened in most regions of the largest country in Central Asia at 01:00 GMT and will close at 15:00 GMT.

The five regions of western Kazakhstan, a former Soviet republic rich in natural resources and located at the crossroads of important trade routes, will vote from 02:00 GMT. The first exit polls are expected on Sunday around 6:00 p.m. GMT.

Kazakhstan descended into chaos in January when protests against high prices escalated into riots, only to be brutally put down. Balance sheet: 238 dead.

The country remains traumatized by this crisis and, a sign that tensions persist, the authorities announced on Thursday that they had arrested seven supporters of an opponent in exile whom they accuse of having fomented a "coup d'etat".

This election aims to turn the page of a difficult year, but also to consecrate the reign of President Tokayev, 69, who has been trying for months to reduce the influence of the clan of his powerful predecessor and mentor Nursultan Nazarbayev.

Because this year has also seen Mr. Tokayev, a trained diplomat with affable manners, turn into a relentless leader, firing on rioters in January, arresting relatives of Mr. Nazarbayev and standing up to Russian President Vladimir Putin, of whom he disapproves. the invasion of Ukraine in February.

President Tokaev campaigned on his project to create a "New Kazakhstan", more democratic and less unequal. But economic difficulties persist, as do authoritarian reflexes.

Mr. Tokayev came to power in 2019, obtaining nearly 71% of the vote after the surprise resignation of the omnipotent Nursultan Nazarbayev, in power for three decades.

Long considered the henchman of his predecessor, Mr. Tokayev officially undertook to cut the cord in favor of the January crisis, calling for the democratization of the country and the fight against the oligarchic system.

Since the start of the Russian invasion of Ukraine, which shocked the former Soviet republics, Mr. Tokayev has been trying to strengthen ties with China, but also with Europe as a counterweight to Russian influence.

This year alone, he has received visits from Russian, Turkish and Chinese heads of state as well as senior European officials, and even Pope Francis.

Promises of democratic openness and economic reforms resonate with the electorate.

Janiya Nakizbekova, a 57-year-old entrepreneur met in Almaty, the country's largest city, confides that she "places great hopes in Tokayev".

Despite these declarations, this election supposed to open the era of the "New Kazakhstan" gives a feeling of deja vu, with a deserted political landscape, a façade of opposition and pressure from the authorities.

Enough to leave many disillusioned voters, like Asset Temirgalïev, a retiree who believes that "there is neither credible candidate nor choice".

As the polls approach, the government has multiplied warnings, culminating in the announcement of a foiled "coup attempt" and the arrest of seven supporters of exiled opponent Mukhtar Abliazov .

President Tokayev also considered it "unacceptable to glorify" those who took part in the January riots.

The international election observers of the OSCE regretted in a report that their recommendations "relating to fundamental freedoms and the conditions of eligibility and registration of candidates" have "remained without action".