Presidency of the RN: at the Châlons fair, Bardella in the heart of the countryside

In the capital of Marne, the one who is already interim president of the Lepenist party wanted to show his muscles: the five deputies and the RN regional advisers from the Grand-Est made the trip to welcome him. 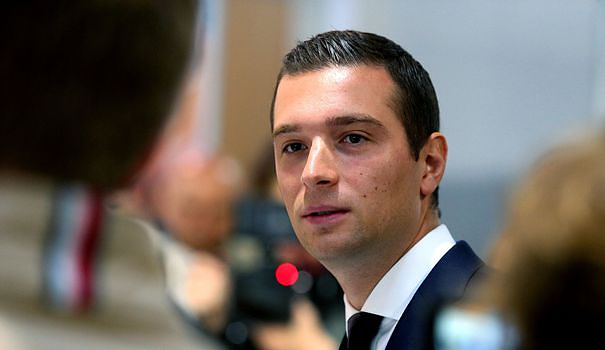 In the capital of Marne, the one who is already interim president of the Lepenist party wanted to show his muscles: the five deputies and the RN regional advisers from the Grand-Est made the trip to welcome him.

In the race to succeed Marine Le Pen, the MEP can indeed boast of broad support from executives, nearly three-quarters of whom have granted him their sponsorship, even if it is all of the up-to-date members. contribution which will decide the match against Louis Aliot.

And, in these lands of the Grand-Est "where the RN achieves significant scores", it is a question, for the one who grew up in Seine-Saint-Denis and who will celebrate his 27th birthday next week, to give pledges to the rural world facing the mayor of Perpignan, reputed to be more provincial.

While serving him a glass of Gevrey-Chambertin, Guy Casiez, wine representative present for "more than 40 years" at the Foire de Châlons, reassures him: "He is not bad, Aliot, he is mayor of Perpignan, he was Marine's companion... But hey, the future is you...".

For the specialist in Burgundy wines, who regrets "no longer having a girl to marry, because I would have been proud that it was with a guy who stands up like you", Jordan Bardella "tells the truth, he likes Frenchwomen, the French, France".

Better: "He has great elocution, he has a great culture, he knows what he is talking about", and, moreover, "one day he will be president ... but not now, huh".

Mezzo voce, the sales representative calls out to the aspiring boss of the French far right: "It's still time to clean up France... Be careful, I'm not racist: I've done all of Africa!" . Bardella, moderately comfortable in front of the cameras: "Yes, and as they know they risk nothing..."

Three stands further on, after an interview with local officials of the FNSEA, the candidate makes a long stop at the stand of the Rural Coordination, the second agricultural union which claims to be "apolitical" and challenges the very right-wing label which is often attached to it. . Its leaders did not give voting instructions in the second round of the presidential election, when the other organizations had called to block Marine Le Pen.

"There is a cultural exception, there should be an exception also in agriculture," argues Jordan Bardella. Accomplishment of the peasants, who would be "very happy to discuss it with your new deputies".

Among them, Laurent Jacobelli, a fervent supporter of the "Bardella method".

"The idea is not to change a team that works: we saw, during the last elections, an interim president of a party that supported us, with a device that worked well."

"There is a need for continuity, with a structured, organized, dynamic flagship," continues the man who is also the boss of the Lepenist group at the Regional Council, who also believes that "people will also join the party because the boss is charismatic, that he has an extra soul".

With already effects on memberships, "perhaps around 20% more in recent days", according to another deputy.

Reputed to be the big favorite in the internal ballot - including among supporters of Louis Aliot -, Jordan Bardella intends above all to achieve a score "sufficiently clear, indisputable". Some counting on "at least 70%", in order to have "a calm, easy presidency", hopes a parliamentarian.

At the same time, in Marseille, Louis Aliot held a meeting, before a new meeting on Sunday in Isère, when Jordan Bardella must go to Alsace on Wednesday.

Marine Le Pen intends for her part to remain "neutral". And continue to play her own score: she must launch her political comeback, Sunday noon, on her Pas-de-Calais land of Hénin-Beaumont when her far-right rival Eric Zemmour must conclude the summer universities of his party Reconquest! in the south.