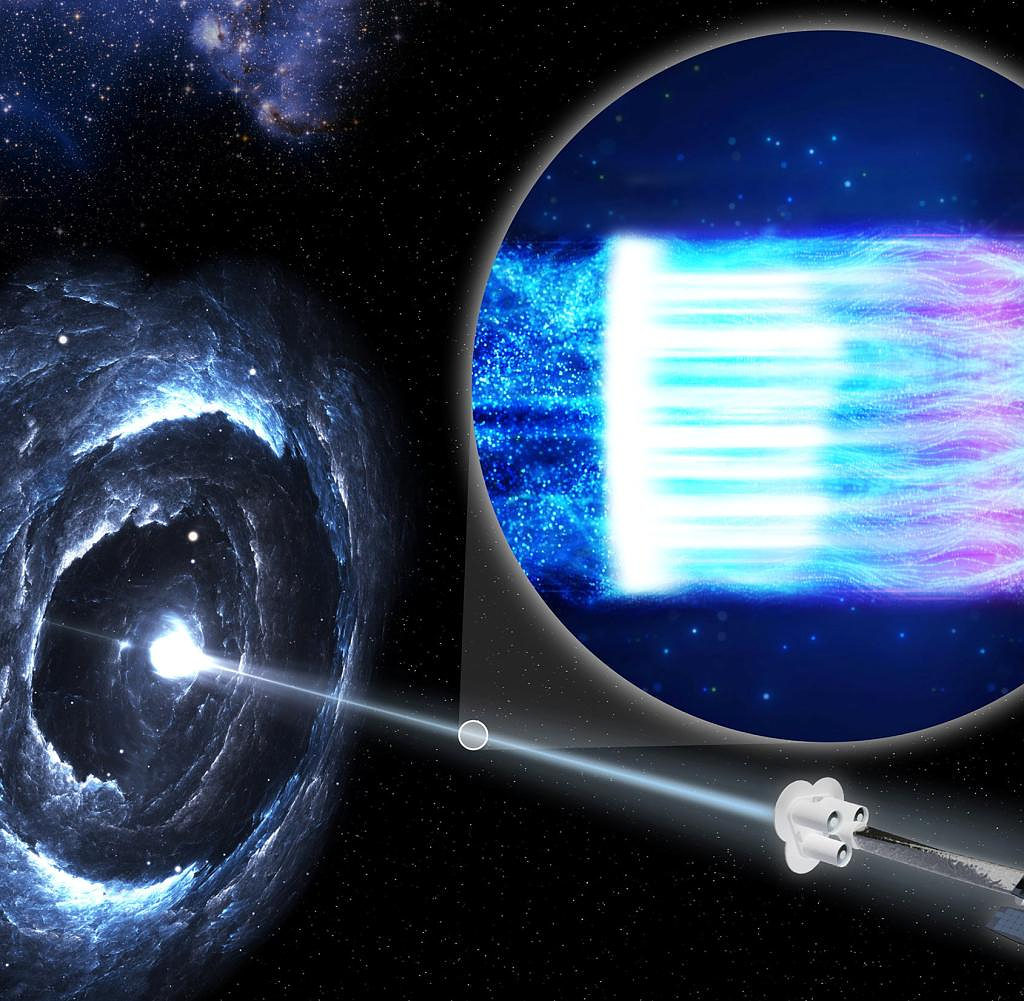 Some supermassive black holes in distant galaxies shine unusually brightly. With the help of the new X-ray telescope IXPE, an international team of researchers has now found out why for one of these celestial objects: A strong pressure wave in the vicinity of the black hole accelerates electrons to extremely high energies - which shape these particles electromagnetic radiation from radio waves to optical light to X-rays and gamma rays. Now it is necessary to check whether this mechanism is the cause in all such objects, according to the scientists in the journal "Nature".

Almost all galaxies have a black hole at their center that is millions or even billions times the mass of the sun. Most of these massive objects behave quietly, they do not emit any radiation. But some are active: gas from the environment falls into the black holes and lights up in the process. Due to the often strong magnetic field of the black holes, part of the infalling matter is deflected and catapulted far into space at the poles of the black holes as bundled beams of matter – known as jets.

If such a jet happens to be pointing almost exactly at Earth, the active black hole lights up particularly brightly as a "blazar" when viewed from here. Astronomers have known for a long time that the radiation from the blazars is caused by high-energy, electrically charged particles – it was just unclear until now how these particles are accelerated to their high energy. In order to track down the cause, the scientists have to determine the polarization of the radiation - i.e. whether the electromagnetic waves oscillate in a preferred direction or not.

"Until now, such measurements were only possible in the radio and optical ranges," explain Ioannis Liodakis from the University of Turku in Finland and his colleagues. “But we only use this to detect particles that left the acceleration range many days or even years ago. The origin of the acceleration can only be observed with the help of X-ray measurements.”

That has changed with the X-ray space telescope IXPE – the Imaging X-ray Polarimetry Explorer – launched on December 9, 2021 by the Italian space agency Asi and Nasa. Measurements of the polarization of X-rays in blazar jets are now possible for the first time. In March 2022, Liodakis and his colleagues aimed IXPE at the blazar Markarian 501, 500 million light-years away. The results of these observations are a "decisive breakthrough in the study of blazars," comments non-participating astronomer Lea Marcotulli of Yale University in the USA in "Nature".

Because the measurements made by Liodakis' team show a significant polarization of the X-rays. "This points to a shock wave as the cause of the acceleration of the particles," say the scientists. Researchers call a shock wave a particularly strong pressure wave that spreads faster than sound. This shock wave is created when the matter bundled by the black hole in the jet and accelerated to almost the speed of light encounters slower-moving gas in the vicinity.

At least with the Blazar Markarian 501 it is clear that a shock wave acts as a cosmic particle accelerator. The question remains whether this is the case for all blazars – or whether there are different blazars with different mechanisms for accelerating the particles. With IXPE, however, the astronomers now have an instrument at their disposal to use X-ray vision to investigate the acceleration of many other blazars and thus to find an answer to this question.

‹ ›
Keywords:
Schwarze LöcherWeltraumteleskope
Your comment has been forwarded to the administrator for approval.×
Warning! Will constitute a criminal offense, illegal, threatening, offensive, insulting and swearing, derogatory, defamatory, vulgar, pornographic, indecent, personality rights, damaging or similar nature in the nature of all kinds of financial content, legal, criminal and administrative responsibility for the content of the sender member / members are belong.
Related News