Portugal struggles to put out the fire in a natural park

“90% of the perimeter of this fire is now under control,” Civil Protection Commander André Fernandes said during a midday press briefing. 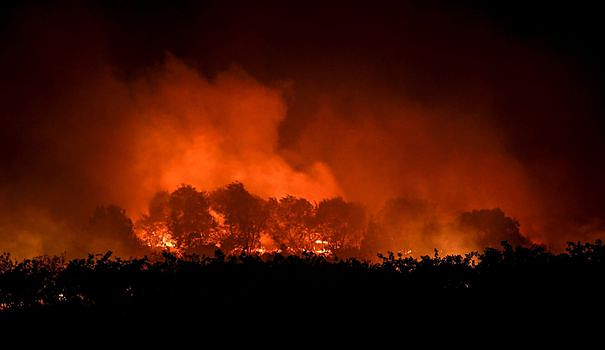 “90% of the perimeter of this fire is now under control,” Civil Protection Commander André Fernandes said during a midday press briefing.

On the ground, however, more than 1,200 firefighters remained hard at work, supported by 340 vehicles and 14 air resources in consolidation operations "within a perimeter of 160 kilometers", he said.

Declared under control last week, the fire in the Serra da Estrela flared up again on Monday. An investigation has been opened to determine the causes.

Fanned by the wind, the flames had progressed rapidly ravaging "about 10,000 hectares" in the hours that followed, according to initial estimates by the Portuguese authorities.

This surface is added to that already burned last week of some 15,000 hectares.

This blaze, which has injured 24 people since Monday, including 3 serious ones, is already the most important of this summer in Portugal. The smell of burning had even been smelled in Madrid on Tuesday, according to Spanish relief.

This fire destroyed unique species in this park recognized by Unesco, in the heart of the Serra da Estrela mountain range culminating at around 2,000 meters.

On Tuesday, the inhabitants of the village of Orjais, at the foot of this mountain range, had experienced moments of anguish as the flames approached their homes.

"It was chaos," Fatima Cardoso, a 62-year-old resident, told AFPTV, telling how the residents had to fight the fire alongside completely overwhelmed firefighters.

The firefighters' goal is to bring the fire under control by Friday before temperatures rise again.

"We are not yet at the end of this critical period of fires", warned Wednesday José Luis Carneiro, Minister of the Interior at the end of a meeting with the persons in charge of the Portuguese Institute of the sea and the atmosphere (IPMA).

“We are going to enter a third heat wave” starting on Saturday which should last until September”, which promises to be a “hotter and drier month” than normal, he said.

Portugal, which is experiencing an exceptional drought this year, has already experienced the hottest month of July in almost a century.

Since the start of the year, some 92,000 hectares have gone up in smoke, the largest area since the deadly fires of 2017 which killed around 100 people, according to the latest report from the Institute for Nature Conservation. and forests.