The ministries concerned "consider a limitation to 24. 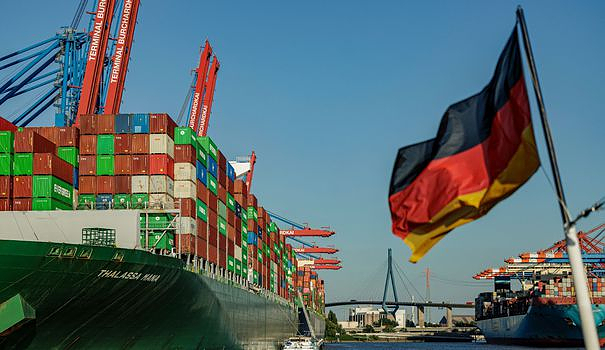 The ministries concerned "consider a limitation to 24.9%" of the participation in the operation of a terminal in the port of Hamburg, instead of the 35% that the Chinese group Cosco had initially negotiated, this source told AFP. AFP.

It would be "an emergency solution to avoid the worst", added this source according to which "the right solution" would be "a total ban" on the sale. But this transaction is the subject of disagreements between the German chancellery and six ministries involved in this file, including those of the Economy, the Interior and Defence.

According to German media, Chancellor Olaf Scholz, himself a former mayor of Hamburg, refuses to block this controversial project which was the subject of a preliminary agreement a year ago.

The government must put this operation on the menu of the Council of Ministers by the end of October so that the decision is not endorsed. Limiting the sale to 24.9% would make it possible to move from "a strategic participation", with a blocking minority, to "a simple financial participation", notes the source.

The supposed determination of Mr. Scholz to give the green light to this acquisition has drawn criticism from several European officials, and even within the coalition formed by the Social Democrats with the Greens and the Liberals.

The port of Hamburg is the first commercial port in Germany and the third in Europe behind Rotterdam (Netherlands) and Antwerp (Belgium). Cosco is the first Chinese shipowner.

Berlin notably argues that Chinese stakes already exist in other Western European ports. Antwerp and Rotterdam, among others, have indeed entered into such agreements in the past, which makes Hamburg fear a competitive disadvantage.

Opponents of this project believe that times have changed. The EU attaches greater importance to the protection of critical infrastructure since the invasion of Ukraine by Russia. Germany has been criticized for ignoring warnings about its dependence on Russian gas.

The European Commission warned the German government in the spring against the plan, which also casts a shadow over the trip to China planned for early November by Mr Scholz, the first to Beijing by an EU leader since the end of 2019.