The eight-day strike started on Sunday is the first in thirty years in this port, by far the most important for freight in the United Kingdom. 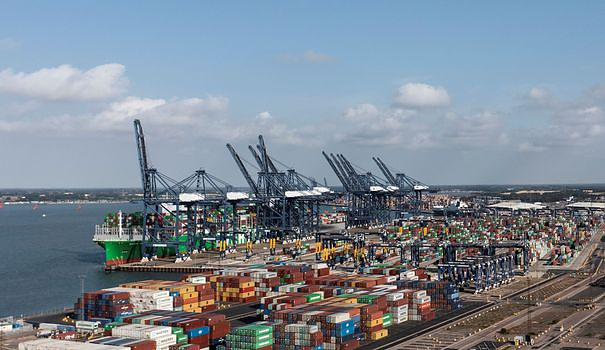 The eight-day strike started on Sunday is the first in thirty years in this port, by far the most important for freight in the United Kingdom.

But in addition to the walkout in Felixstowe, on the North Sea, north-west of London, there are those at the e-commerce giant Amazon or in the Royal Mail postal service. Together, they "will have a billion-pound impact on trade and cause significant delays", prognosticates the logistics company Parcelhero.

Additional costs that will probably be passed on to consumers, in the midst of the cost of living crisis in the country, warns Parcelhero, recalling that "containers from countries such as China or Japan arrive daily in Felixstowe, transporting household appliances, computers , bicycles or frozen food".

Britain's International Freight Association, Bifa, says it's too early to fully assess the impact of the strike but that in recent years all disruptions at Felixstowe have had a knock-on effect on international supply chains.

Jonathan Owens, who teaches logistics at the University of Salford, tempers the impact of a week-long strike in Felixstowe, where he says products arriving there are ordered well in advance and do not incorporate just-in-time production lines.

“There should be enough inventory in supply chains for key products,” he adds, noting however that problems will arise if there are panic buying rushes that empty inventory quickly.

The commercial sector, for its part, wants to temporize. Andrew Opie, director of food and sustainability at BRC, the representative organization, points out that distributors will "develop contingency plans" to re-route containers to other ports or use other modes. transport".

"Fresh food products will not be affected because they transit massively through Dover", on the Channel, he adds.

Since the Covid crisis and its impact on the international supply chain in particular, many companies have indeed adopted a logic of "just in case" rather than "just in time", notes Ian Matheson, word of BIFA, interviewed by AFP.

He notes that the sector has become more resilient by developing alternative supply routes since the crises caused by the pandemic and then the congestion of ports with the resumption of post-lockdown deliveries.

It is nevertheless a headache for international shipping companies.

A spokesman for the shipping company Maersk, one of the world's giants in the sector, explains to AFP that it has "three ships which had to avoid Felixstowe during this strike".

The other ships scheduled have seen their arrival either brought forward to Felixstowe or delayed to avoid the week of the strike, adds Rainer Horn.

“We normally try to keep the boats on their normal rotation” because after having unloaded their cargo intended for import, they are often scheduled to reship another for export, which can thus shift complex shipping schedules internationally," says Horn.

Discussions between management and employee unions seem in the meantime deadlocked on the English port.

The vast majority of Felixstowe's approximately 1,900 employees voted for the walkout. The "dockers" are demanding a 10% salary increase, pointing to double-digit inflation that should reach 13% in October and could rise further.

Management believes its offer of 7% plus a £500 bonus is 'fair' and laments the impact of the strike on the UK supply chain', but says it is working with customers to 'mitigate disruption ".