It should one day become the landmark of the new German Harbor Museum: the four-masted barque “Peking”. 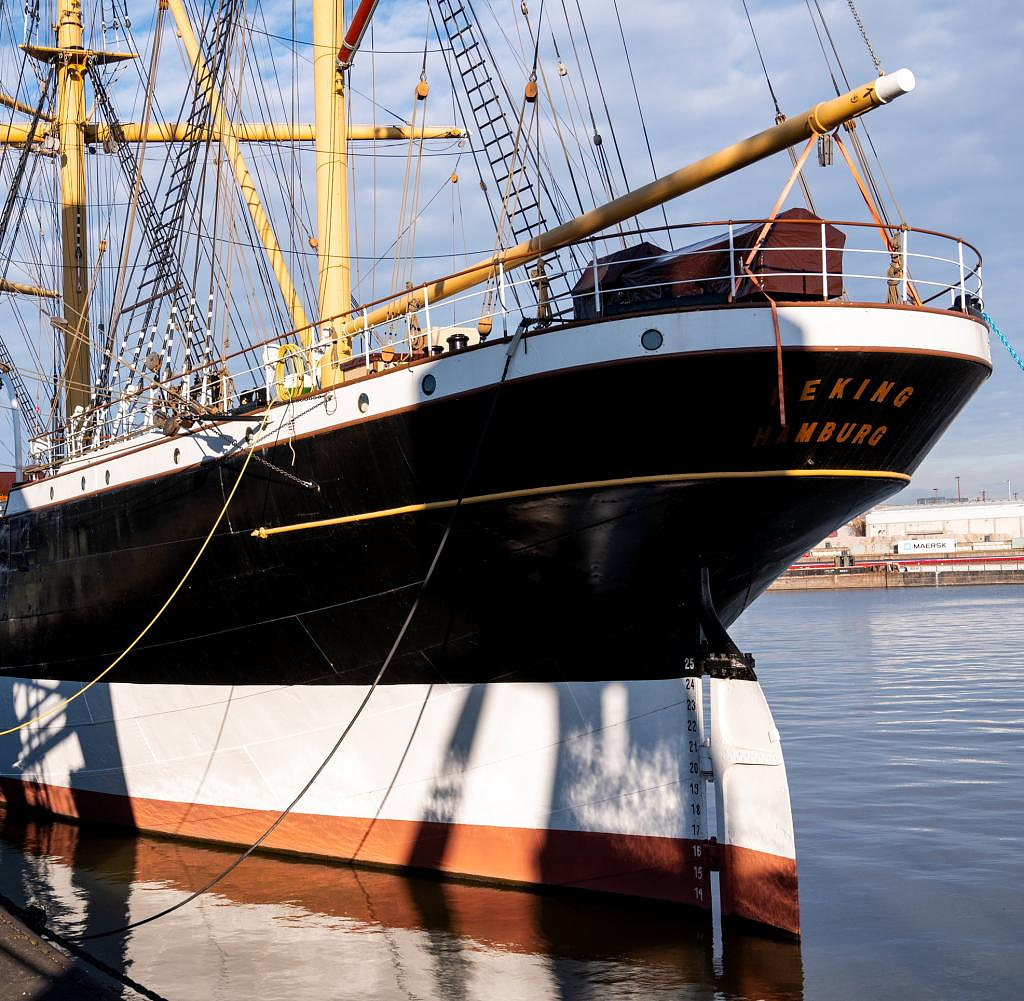 It should one day become the landmark of the new German Harbor Museum: the four-masted barque “Peking”. More people than is currently possible want to visit the historic sailing ship in the Port of Hamburg: 6,700 in the 2022 season, and around 44,000 people in total visited the German Port Museum at the locationSchuppen 50A.

“The number of visitors shows how fascinating the port is. We want to build on this with the German Port Museum and make the port tangible and tell the history, present and future of global trade and globalization," said Senator for Culture Carsten Brosda (SPD) on Monday on board the "Peking".

Since April 2022, the former Hamburg Port Museum in the historic 1950s shed on Bremer Kai/Hansahafen has been the location of the German Port Museum. A second museum location is to be built in the next few years on Kleiner Grasbrook directly opposite Hafencity. An architectural competition will start next year. The “Peking” is to receive its final berth there. "The Beijing will almost certainly become another landmark in the city," said Brosda. The federal government provided 185.5 million euros for the construction of the German Harbor Museum and the restoration and transfer of the "Peking".

In cooperation with the Hamburg Port Authority (HPA), the berth of the "Peking" was further upgraded this summer. "Since September 21, the ship has been safely and securely moored to two newly placed dolphins on the water side and is therefore well prepared for future storm surge events," said HPA Managing Director Jens Meier. In addition, the supply and disposal lines required for future visitor operations on the "Peking" could be laid. The upgrading of the berth is to be continued and completed at the beginning of 2023.

Hans-Jörg Czech, director and board member of the Hamburg Historical Museums Foundation (SHMH), emphasized the importance of volunteers in associations such as "Freunde der Peking" or "Hafenkultur", which played a central role in the communication and preservation of the objects. "Without the active support of these many volunteers, this location would not be what it is," said Czech. This personal mediation by people who have experienced things themselves in action in the port is what makes this place so lively. So there were workshops on topics such as rigging or ironwork under the label "Hafenmanufaktur".

“Ports have always been particularly fascinating places for me. Their history and their important role in the coexistence of people in the cities connected to them open up unique perspectives on international coexistence, from which something like global citizenship can emerge," said founding director Klaus Bernhard Staubermann. A modern museum must arouse curiosity, be empathetic, inform and empower its visitors to act independently. "A museum should be a place by people for people." This includes the migration society as well as colonial history.

SHMH director Czech does not see any content overlap with the Maritime Museum Hamburg. “We have been working closely with the Maritime Museum for many years. Our concepts follow a different direction in terms of content. We actually look at the port. Of course, ships are also discussed there, but it's not primarily about shipbuilding," said Czech. "I believe that the quality of Hamburg's cultural landscape, as we all experienced in practice with the Elbphilharmonie, does not lose with new houses, but on the contrary gains."

‹ ›
Keywords:
MuseenHäfenSegelschiffeBrosdaCarstenHamburgTourismusTexttospeechPekingCarsten BrosdaMaritime MuseumMaritimem Museum HamburgHamburg Port AuthorityJens MeierSPDPekingÈHafenmuseumViermastbarkGeschichteMusik
Your comment has been forwarded to the administrator for approval.×
Warning! Will constitute a criminal offense, illegal, threatening, offensive, insulting and swearing, derogatory, defamatory, vulgar, pornographic, indecent, personality rights, damaging or similar nature in the nature of all kinds of financial content, legal, criminal and administrative responsibility for the content of the sender member / members are belong.
Related News