“I am following attentively, with concern and pain, the situation created in Nicaragua,” the pope said after the Angelus prayer. 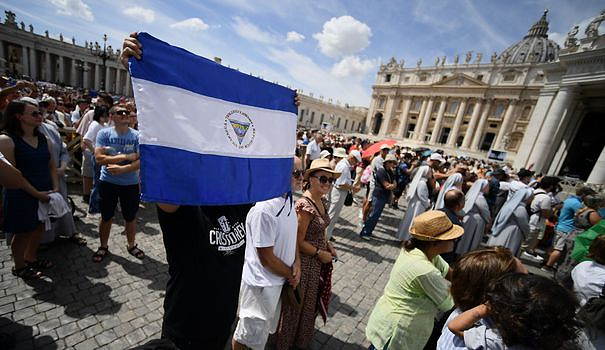 “I am following attentively, with concern and pain, the situation created in Nicaragua,” the pope said after the Angelus prayer.

“I would like to express my conviction and my hope that, through an open and sincere dialogue, we can still find the bases of a respectful and peaceful coexistence,” added the leader of the 1.2 billion Catholics. in the world.

The Vatican said Nicaragua expelled its ambassador in March.

A spokeswoman for the head of European diplomacy, Josep Borrell, stressed on Sunday that the European Union was “monitoring the situation very closely, and with concern”.

For Brussels, she repeated, "Nicaraguans must find a peaceful and democratic solution to their political crisis, through dialogue".

Msgr. Alvarez, the bishop of Matagalpa, was arrested in the early hours of Friday and "under house arrest", according to the Nicaraguan police who surrounded the bishopric since August 4. Police cited "destabilizing and provocative" activities by the bishop.

Eight other people, including five priests and lay people, were taken with him, according to the Episcopal Council for Latin America and the Caribbean (Celam).

Supporters of Bishop Alvarez said he was abducted "with violence" from an unknown location.

The Cardinal and Archbishop of Managua, Leopoldo Brenes, then clarified that Bishop Alvarez was being held in a family residence where he was able to meet him, noting that "his physical condition has deteriorated", but that his "spirit and morale are strong".

The other eight are being held in El Chipote prison, according to the Nicaraguan Center for Human Rights (Cenidh).

The United Nations and the Organization of American States have expressed their concern.

The government has put pressure on the Bishop of Matagalpa since he denounced the authorities' closure of five Catholic radio stations in his diocese and demanded "respect" for freedom of worship and an end to "harassment". imposed on the Catholic Church.

A week ago, the diocese of Sinua denounced the arrest of one of its priests, Oscar Benavidez, whose prosecution requested that he be remanded in custody for 90 days.

On Wednesday, 26 former heads of state and government from Spain and Latin America called on Pope Francis to "firmly defend the Nicaraguan people and their religious freedom", accusing Nicaraguan President Daniel Ortega of "dictatorship primitive".

Relations between the Catholic Church and the government have been strained since 2018 when protesters demanding Mr Ortega's resignation took refuge in churches. The repression of the demonstrations left more than 350 dead.

The Nicaraguan head of state has accused the Catholic clergy of complicity in the coup attempt hatched by Washington. The crisis even led to the expulsion in March of the Apostolic Nuncio, Bishop Waldemar Sommertag.

By attacking the Catholic Church, after silencing all his opponents, Daniel Ortega, 76, re-elected in 2021 for a fourth consecutive term at the head of his country in a ballot from which all his serious potential adversaries, arrested or forced into exile, continues its quest for absolute power.

According to the European Union, there are more than 180 "political prisoners" in Nicaragua and, during the first half of 2022, the authorities there closed more than 1,200 civil society organizations.

Earlier in the month, the office of Josep Borrell had called for the release of these political prisoners, denouncing the repression of the Nicaraguan government against its opponents.