Her mother Anna Paratore supported her during her early years in the Italian Social Movement (MSI), a neo-fascist party created after the Second World War from which Meloni took over, at the founding of his party Fratelli d'Italia at the end of 2012, the tricolor flame . 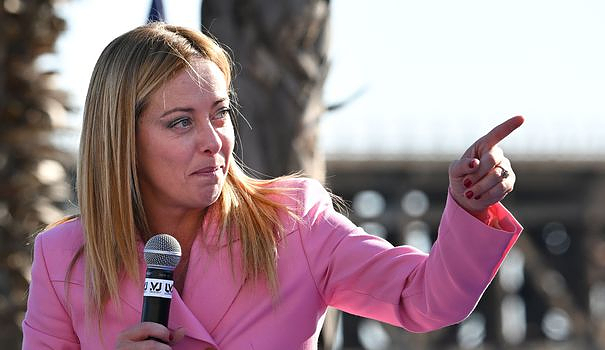 Her mother Anna Paratore supported her during her early years in the Italian Social Movement (MSI), a neo-fascist party created after the Second World War from which Meloni took over, at the founding of his party Fratelli d'Italia at the end of 2012, the tricolor flame .

And the future head of government still maintains a close relationship with her mother, who lives in Rome in the popular district of Garbatella and whom she calls every day: "I feel a physical need to call her and her opinion is one of the ones I fear the most".

Anna Paratore, also a loyal MSI activist, has written dozens of pink novels under a pseudonym.

Giorgia Meloni is also close to her right-wing sister Arianna, whom she describes in her autobiography, "Io sono Giorgia" ("Giorgia Meloni - My itinerary" in French), as "the most important person in all his life until the birth" of his daughter Ginevra in 2016.

The day after the vote, she posted on her Instagram account a note written by the child, nicknamed "Giggi", saying: "I'm so happy you won. I love you so much!".

His sister is married to Francesco Lollobrigida, co-founder of Fratelli d'Italia and president of the party's group in the Chamber of Deputies.

In her only public speech since her victory, a brief statement overnight from Sunday to Monday, she did not forget to mention her dear family: "I want to thank my family, Andrea, my daughter, my sister, my mother. All those who have been there for me more than I have been for them".

Television journalist, Andrea Giambruno, 41, has been her companion for seven years and the father of their six-year-old daughter.

"My companion is on the left (...) We talk about gays, ethical subjects, the legalization of soft drugs. We don't have the same ideas," she confessed in an interview in 2018.

"It was a joke, I'm not on the left," tempered the interested party on Wednesday in an interview with Corriere della Sera. "It's just that we have differences on certain ethical issues, such as assisted suicide."

The one whom the Italian press already calls the "First Gentleman" lives one week a month in Milan, where the Mediaset studios are located, Silvio Berlusconi's media empire for which he works.

She describes him as "one of the rare men in the world capable of not suffering from having an accomplished woman by his side".

"We help each other to take care of Giggi when he's here," explained Giorgia Meloni, who sees no contradiction between her motto "God, fatherland, family" and the fact that she is unmarried.

"I have heard this nonsense very often. If you are not married, you cannot defend the natural family based on marriage. It is a bit like saying that if you are young you cannot have at heart the problems of the elderly", she says in her autobiography.

In this bestseller sold to 140,000 copies in Italy, she also tells how her own mother, pregnant with her, gave up abortion at the last moment, and how she grew up with an absent father, but between a mother and a sister. beloved eldest.

This could partly explain her attachment to the traditional family and her hostility to abortion, even if she has pledged not to touch the law authorizing it.

At Giorgia Meloni, politics is therefore undoubtedly a family affair, and vice versa. With a great void, however, the one left by a father who abandoned his mother and two daughters to live in Spain. "When I was still very young (...) he took off and disappeared from our horizon", she says in her book.

"It may be a deeper wound than a father who dies, because in that case you can hope that he is watching you from heaven, whereas if he leaves you have to to face his ghost", she analyzes.

With this heavy family past, his face-to-face with his coalition partner Silvio Berlusconi, who remained an unrepentant macho seducer at 85 and who already presents himself as a father figure for Meloni and their ally Matteo Salvini, promises to be more tumultuous.