Political blackmail in Saint-Etienne: the explanations of the director of cabinet

Mayor Gabriel Perdriau was also placed in police custody on Tuesday as part of the investigations into the filming and use of a video shot in 2014 in which we see Gilles Artigues, his former first deputy and ex-deputy known for his Catholic commitment, to be massaged by a man in a hotel room in Paris. 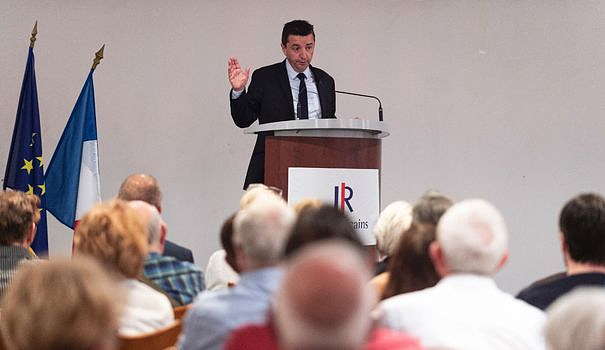 Mayor Gabriel Perdriau was also placed in police custody on Tuesday as part of the investigations into the filming and use of a video shot in 2014 in which we see Gilles Artigues, his former first deputy and ex-deputy known for his Catholic commitment, to be massaged by a man in a hotel room in Paris.

"Neither the mayor nor myself are the sponsors of this video," said the chief of staff in an interview broadcast Wednesday on the local television channel TV7. "I am calm about the sequence of events".

At the same time, a hundred people demonstrated in the rain in front of the town hall to demand his resignation, that of the mayor and the deputy for education, also incriminated in this affair.

Several local elected officials have already called on the mayor and his team to step back, while LR launched an exclusion procedure against him.

On Wednesday, the Medef de la Loire and three other employers' organizations published a press release denouncing "practices outside of any republican and managerial ethics".

"We wish to strongly challenge the elected officials of Saint Etienne Métropole and the City on the need and urgency to take the necessary measures so that governance regains serenity, teamwork and exemplarity", says this press release.

The affair broke out at the end of August when the Mediapart news site published the detailed confessions of a former close friend of the municipal team on a "daub of morals" organized according to him at the request of the mayor and his relatives.

The Lyon public prosecutor's office has opened a judicial investigation for "invasion of privacy, aggravated blackmail, embezzlement of public property by a person in charge of a public function, breach of trust and concealment of these offenses" after a complaint by Gilles Artigues.

Regarding overwhelming audio recordings published Monday by Mediapart, Mr. Gauttieri said he was "shattered with shame" by his own remarks, pronounced according to him "in a moment of anger, bewilderment".

"I have a video showing you the ass in the air with a guy. Do you not mind? The very Catholic MP Gilles Artigues very good father in something like that?" he said in this recording made, according to Mediapart, during a meeting in the presence of the mayor in July 2018.

"If the fact that I go to jail makes you fall because you pass for an old pedal on the return (...) I have no problem", he says in another recording dating according to Mediapart from November 2017 .