The comprehensive remodeling of Calle Poeta Eduardo Carranza in Genil has been started by the City Council of Granada. 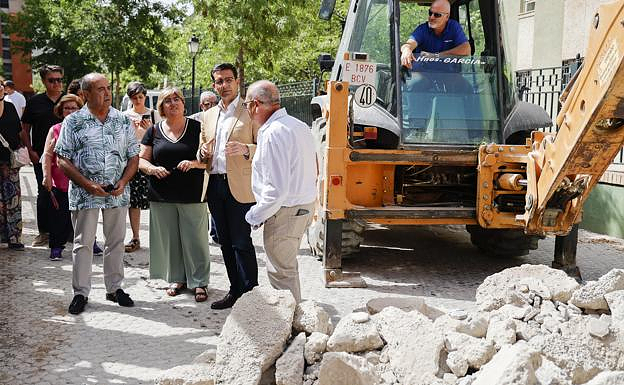 The comprehensive remodeling of Calle Poeta Eduardo Carranza in Genil has been started by the City Council of Granada. This will increase pedestrian traffic and accessibility and improve safety throughout the area through the renovation and improvement of the Street lighting.

Francisco Cuenca, the mayor of Granada visited the Plaza del Rocio Monday with Ana Munoz (first deputy mayor) and representatives of the Genil Neighborhood Association. To stated that this is an example of a working method that relies on listening to neighbors and meeting their needs.

"After renovating one of the most beautiful squares of the district, Plaza del Rocio was renovated, it was now time to make the same thing with this pedestrian street that has a high level of traffic, as it connects various educational centers and areas that have a large influx of people. The mayor pointed out that the square was surrounded by neighbors who had long demanded its settlement.

This action will take approximately one month and a quarter to complete. It is based on an in-depth study of the condition of the pavement, trees, and electricity installations for public lighting.

The street's total renovation cost is 61,500 euro. It consists of several phases. They have begun with excavation and leveling the hydraulic surface. This will be followed by the construction of concrete pavements, the removal of curbs and steps, and finally the installation and modification of handrails and railings that allow for easy access to the Plaza.

The work, which will be finished before the beginning of the new school year will make Cervantes' busiest area safer, friendlier, and more compatible with neighbors.

‹ ›
Keywords:
LavadoCaraCallePoetaEduardoCarranzaGranada
Your comment has been forwarded to the administrator for approval.×
Warning! Will constitute a criminal offense, illegal, threatening, offensive, insulting and swearing, derogatory, defamatory, vulgar, pornographic, indecent, personality rights, damaging or similar nature in the nature of all kinds of financial content, legal, criminal and administrative responsibility for the content of the sender member / members are belong.
Related News