Plaza Francisco Navarrete is becoming a point of social interaction

Plaza Francisco Navarrete, one of the children's playgrounds and a gathering place for young people in Ejido Norte is also a great spot for them. 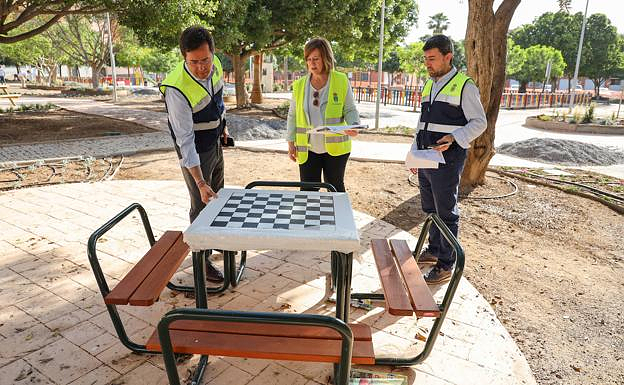 Plaza Francisco Navarrete, one of the children's playgrounds and a gathering place for young people in Ejido Norte is also a great spot for them. This space has seen a transformation in the last few months and is now a great place to meet with friends.

The project will include the installation of a steel colored perimeter fence to seperate the play areas and transit areas. It also includes the repair and replacement of street furniture with cast iron and wooden benches.

The project includes areas that are attractive to the elderly. For example, a walking route is being constructed that allows for healthy calisthenics games, rooms that allow for drawing boards, and rooms that can be used for chess.

Two petanque courts were added to the project. Spaces have been interspersed by planters made of steel of various diameters.

A total remodeling project that costs more than 200,000 euro. It has increased the area of use and taken advantage of areas that were once on the ground. This action is part of the Municipal Action Plan for Parks, Squares and Children's Areas.

The mayor of El Ejido Francisco Gongora and the Councilor for Public Works Alberto Gonzalez made a technical visit this week to the square to confirm the modernization plan for the site. It is located between Olimpiadas and Domiciano streets and highlights the need for it to be realized.

‹ ›
Keywords:
PlazaFranciscoNavarretePerfilaPuntoEncuentroSocial
Your comment has been forwarded to the administrator for approval.×
Warning! Will constitute a criminal offense, illegal, threatening, offensive, insulting and swearing, derogatory, defamatory, vulgar, pornographic, indecent, personality rights, damaging or similar nature in the nature of all kinds of financial content, legal, criminal and administrative responsibility for the content of the sender member / members are belong.
Related News