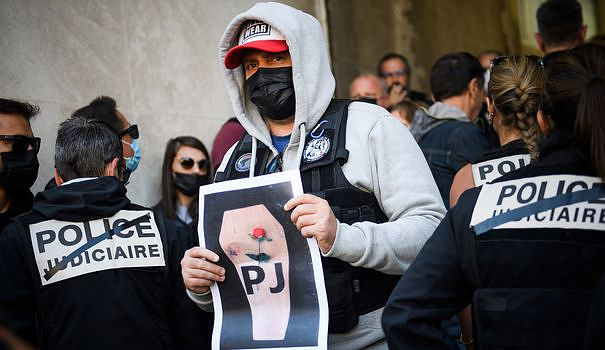 But faced with the risk of sanction, all preferred to remain anonymous.

Scores settling in the underprivileged neighborhoods of Marseille, narco-banditry, political corruption: their investigations are long and complex, in the heart of the 2nd PJ of France, which radiates from Nice to Perpignan, Corsica included.

"Today we still hold them, but we are faced with traffickers without faith or law who insult and threaten the judges": if this reform passes as it is, it would have a "devastating" effect on organized crime, fears one of them.

At the Evêché, the Marseille police station, the astonishment has dissipated. On Friday, they welcomed their new leader, Dominique Abbenanti, a former security attaché in Algiers. “We gave him a good reception, but it will not be an Arella”, advances his colleague from the criminal.

On the hierarchy side, we would like business to resume: “We are moving on now”.

But on the ground, the anger remains. “The period is not for relaxation but for witch hunts and intense arm wrestling,” insists a BRB investigator.

As a sign of protest, non-crucial operations have been postponed, in Marseilles, Toulon or Nice. Entire services have laid down their arms. Except in Corsica: "Our pain for Eric Arella is so sincere and deep that we do not want to pollute it with acts that would discredit our positions", testified a police officer.

On Monday, they will return to the streets, everywhere in France, with the announced support of judges and lawyers. Even if they are not against the entire reform: "We know that our colleagues in the police stations are overwhelmed" and that they must be strengthened.

These four investigators therefore support the idea of ​​a single investigation sector, bringing together PJs and public security police officers in charge of everyday crime. But they are against the idea of ​​placing this sector, like all police services at the level of the department, under the authority of a single departmental director of the national police (DDPN), dependent on the prefect.

For them, this sector must be under an independent authority and over a wider geographical area.

"If you want to fight against breaches of probity, especially here in the South, you don't need the departmental level," insists the investigator from the financial brigade. "Imagine, at some point we are investigating an elected official who is close to our future boss (the prefect), what will happen?" he wonders.

Because attempts at intimidation are frequent: "I remember very well this president of the Var departmental council who asks an investigator: tell me, your wife, does she not work in the department?"

As for the fight against drug trafficking, a phenomenon that plagues many parts of the city, the police chief of Bouches-du-Rhône, Frédérique Camilleri, regularly praises the results of her strategy of "pounding" deal points .

But "shelling is short-termism", retorts the Ofast policeman: "it allows a city to find a brief peace of mind. But you also have to attack the structures of the network".

But would the departmental director agree to pay for a mission in Spain, the hub of cannabis in Europe? “No, he will prioritize the money to the services of his department, so it will be difficult to tackle the ramifications, the bases of the traffic. It is the culture of numbers, of display, of immediacy” , warns this investigator.

To fight effectively against narco-banditry, the mafias, it takes time, means, expertise, assure these four police officers. The fight against money laundering is a good example: invisible but crucial.