Most of these people died in landslides and floods on Friday in Mindanao, a southern island of the archipelago, after heavy rains. 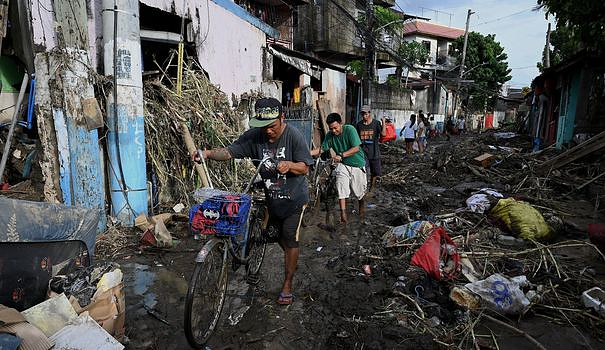 Most of these people died in landslides and floods on Friday in Mindanao, a southern island of the archipelago, after heavy rains.

"We went from a search and rescue operation to a recovery operation because the chances of survival after two days are practically zero," said Naguib Sinarimbo, civil defense officer for the Bangsamoro region in Mindanao.

The storm hit the main island of Luzon overnight from Saturday to Sunday, sweeping away everything in its path and causing power outages. Manila and nearby towns suffered flooding.

Nalgae then moved away on Sunday afternoon in the South China Sea.

An average of 20 typhoons and storms hit the Philippines each year, killing people and livestock in their path, and ravaging farms, homes, roads and bridges, although the south is rarely affected.

The number of victims could be expected to increase again, the national agency for the management of natural disasters still listing 63 people missing in its latest report.

As rescue teams searched for new bodies amid the mud and debris, storm survivors continued the harrowing cleanup of their flood-shattered homes.

In the municipality of Noveleta, south of Manila, residents flushed muddy water from their homes and shops, drying their furniture and belongings in now sunny streets.

"In a lifetime here, this is the first time we've experienced this kind of flooding," said Joselito Ilano, 55, whose home was flooded waist-deep in water.

"I'm used to flooding here but this one was just the worst, I was taken by surprise."

Perfidia Seguendia, 71, and her family lost all their possessions except the clothes they were wearing when they fled their home to reach their neighbour's two-storey house.

"Everything was flooded: our refrigerator, the washing machine, the motorcycle, the TV, everything," Perfidia Seguendia told AFP.

"All we managed to do was cry because there's nothing we can do. We couldn't save anything. Only our lives."

Nalgae swept through the disaster-prone country, flooding villages, destroying crops and knocking out power in many areas.

It hit the Philippines in the middle of the All Saints' Day long weekend, which takes place on Tuesday, when millions of Filipinos cross the country to visit the graves of their loved ones.

And as the storm moved away from the country towards the South China Sea on Monday, state meteorologists in the Philippines were warning that a tropical depression was heading towards the country.

In recent years, landslides and flash floods in mountainous areas affected by deforestation have been among the deadliest consequences of storms in the Philippines.

In April, deadly landslides and flooding from another tropical storm hit farming and fishing communities hard in central Leyte province.

As the planet is affected by global warming, storms and typhoons are becoming more powerful, scientists warn.