Philippines: after a strong earthquake, the inhabitants fear to return home 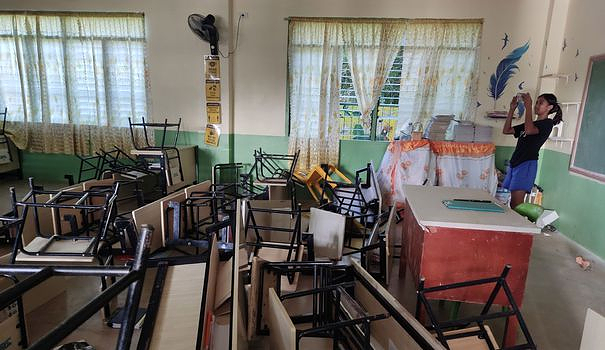 The 6.4-magnitude earthquake struck the town of Dolores in the mountainous province of Abra (north) on Tuesday evening, causing a power cut in most of the region. The earth continued to shake throughout the night as well as Wednesday morning, authorities said.

Rescuers have extracted 10 people from damaged buildings in the neighboring province of Ilocos Norte, which has a total of 15 injured, according to authorities.

Philippine President Ferdinand Marcos Jr decreed the closure of schools on Wednesday in this part of the archipelago and the authorities have begun to assess the damage.

A building housing a photo gallery dating from the presidency of his father, Ferdinand Marcos Sr, in the town of Batac -- the family cradle -- is among the damaged buildings.

"People are asking for tents because they are afraid to return to their homes because of the aftershocks, which could collapse their houses whose foundations have been weakened," President Marcos told reporters.

A rescuer, Ron Sequerra, told AFP that his family had been awakened by strong tremors in the province of Abra.

"We hid under a table and my family didn't come out of the house until after the tremor was over," rescuer Ron Sequerra told AFP by phone.

Boulders rolled down a hill and temporarily blocked a road linking Batac to the neighboring town of Banna, in the province of Ilocos Norte. Churches in the provinces of Abra and Ilocos Norte also suffered damage, according to Civil Security.

Sick people spent much of the night outside two public hospitals in Ilocos Norte province after ceilings collapsed in several rooms which damaged equipment, authorities said, adding that no one was was killed or injured.

In Lagayan, the most affected city in the province of Abra, 58 classrooms suffered damage as well as the town hall and a high school which were closed due to cracks and broken windows.

"The walls and poles have been destroyed. It is no longer a safe place," Esterio Apolinar, headmaster of Pulot high school in Lagayan, told AFP.

The spire of a church in nearby La Paz has collapsed, parish priest Christian Edward Padua told AFP.

In a church in Sarrat, a town in Ilocos Norte, a life-size statue of Jesus has fallen, priest Jose Vernon Ilano reported.

The governor of this province, Matthew Manotoc, nephew of the president, asked the officials to take a day off while the buildings were inspected.

Civil Aviation Services said in a statement that all airports in the region have been temporarily closed to check that runways and other facilities have not been damaged.

In July, a magnitude 7 earthquake, also in the province of Abra, caused landslides and cracks in the ground, killing 11 people and injuring several, according to an official count.

The Philippines is regularly hit by earthquakes due to its position on the "Ring of Fire", an arc of intense seismic activity that circles the Pacific Ocean through Japan and Southeast Asia.