Post a Comment Print Share on Facebook
Famagusta
DOLLAR 18,84
EURO 20,26
GOLD 1.140,73
BIST 4.186,01
The state of NRW has to burn millions of masks and van Laack smocks
"That's the only thing I want - drugs"
How Goethe plunged his son into misfortune
"America will soon be in civil war"
Here you can now get funding for the renovation
"It's not just about having sex, it's about much more"
The "Komet" brought Udo Lindenberg his first number 1 hit
Fall and demolition after an abstruse jump to 161.5 meters
"I felt like my heart was being ripped out"
What you should now know about organ donation

Even the locals rarely came here. 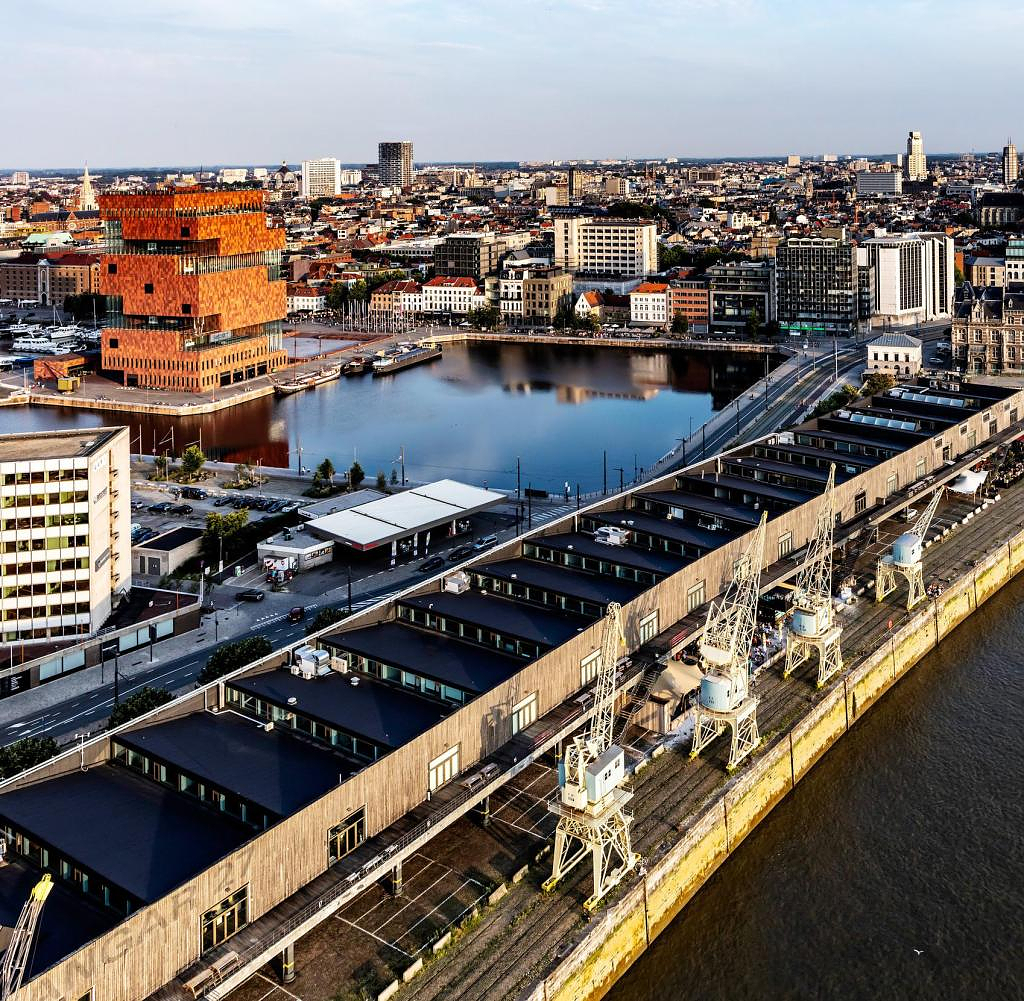 Even the locals rarely came here. It wasn't the distance. The Antwerp district around the old port was too disreputable. With its empty warehouses, warehouses, docks and prostitutes, it merged almost seamlessly into the historic tourist old town with its world-famous Cathedral of Our Lady. But that was once: The dingy image is history.

Today the Museum aan de Stroom (MAS), the museum by the river, rises above the Bonapartedok. In the Willemdok right next to it there are luxury yachts on the quay and chic restaurants. Het Eilandje, the islet, is to the north of the city.

In less than ten years, the old harbor area has blossomed from a sleazy area into “the place to be” – and no longer just for Antwerp residents. In 2018, the British newspaper "The Independent" named the Eilandje one of the ten trendiest neighborhoods in Europe.

The Eilandje is hip. Warehouses and warehouses have been converted into cultural hotspots, creative pop-ups, cool clubs and chic cafés, restaurants and lofts.

The MAS is considered to be the initial spark for the metamorphosis of the old harbor district. Since 2011, the museum has been rising more than 60 meters high in a spiral and red-brown color from the Bonapartedok. It houses the city's historical, ethnic and maritime collections.

Around ten years later, the striking building stands as a landmark for the Eilandje - and a large-scale urban development scenario. Mayor Bart De Wever defines it as follows: "We are trying to transform a city that lived with its back to the water into a city that lives with its face to the water". In addition to the redesign of the promenade along the Scheldt, this includes the renovation of the old port.

The Eilandje is as big as 242 soccer fields. A good third of the more than 170 hectares are water surfaces in the docks. The oldest are the Bonapartedok and Willemdok, remnants of a time when the city was under French rule. Where Napoleon wanted to create a military base, De Wever wants recreational opportunities: in the near future you should be able to swim or kayak there.

The MAS cannot be overlooked. It's not just because of its height. Each floor of the tower museum resembles a container box, which was stacked here on the quays just a few years ago.

And each floor is rotated 90 degrees. The famous Dutch architects Neutelings Riedijk wanted to have enough space for the wave-like glass galleries.

They offer surprising and changing views of the Flemish city: the Scheldt to the west, the historic center to the south and the Havenhuis (Port House) to the north.

The building is another eye-catcher. The Havenhuis serves as the new seat of the Port Authority and is located on the Kattendijkdok. The design comes from Zaha Hadid. The British-Iraqi star architect put a superstructure on a former fire station that seems to float above the building like the hull of a sailing ship.

Its faceted surface glitters like a diamond. A pointer to the 16th century. Antwerp has been the world's largest diamond center for over five centuries.

The Havenhuis opened in September 2016, just six months after Hadid's death. The spectacular building can only be visited with a guide – including the viewing platform.

In the Montevideo subdistrict is the Red Star Line Museum, a must-see. It is located in the former buildings of the shipping company of the same name, founded in 1872. The historic halls have been restored and a tower added.

It opened in 2013 as a kind of counterpart to New York's Ellis Island immigration museum. In Antwerp, for many people, mostly emigrants and refugees, the departure into a new world began.

By 1935, the ships of the Red Star Line transported almost three million people overseas, primarily to Philadelphia and New York. One of them was the astrophysicist Albert Einstein.

Like other German-Jewish intellectuals and artists, he fled the Nazi regime to America. His story and that of many others is told in the Museum for European Migration Overseas. It is still said today that Antwerp was New York on the Scheldt at the time.

Montevideo and Cadix are names reminiscent of the ports called from Antwerp. Both sub-quarters are still in the midst of their metamorphosis. Luxury residences are springing up, and vast green spaces have sprung up with Droogdokkeneiland and Schengenplein. But the culinary delights are not neglected either.

Brasserie La Pipe d'Anvers on Cadixstraat, with its Flemish beer goulash, Belgium's traditional beef stew, is no longer a secret. Neither is the Instroom on Droogdokkenweg, which opened in 2021 and is a gastronomic refugee project. Under the supervision of Belgian top chef Seppe Nobels, asylum seekers celebrate a multicultural cuisine that they brought with them from their homeland.

A popular detour is in the Indiestraat on the eastern quay wall of the Kattendijkdok: the Brouw Compagnie. Johan Van Dyck opened the independent brewery in 2017. He is one of the pioneers who settled here.

"For many, this decision was courageous," says the 40-year-old. In the meantime, the numerous cruise tourists, whose ships dock in the Kattendijkdok, also find their way here. No wonder: Johan has already won several gold medals for his beers.

The brewery is known for the historic Antwerp Seefbier, as well as Bootje's Bier - a beer brewed as a tribute to the Red Star Line. The Seefbier was long forgotten. “I stumbled across the name in a book about the city's old breweries and set out to find the recipe,” says Johan. After two years, he discovered handwritten recipe notes from an old brewing family.

He liked the very first brew: light, subtle spice without a bitter note. Since opening he has developed several new beers with names such as Super Cadix, Nonkel Pater, Miss T Lucie and Eilandje. They can be tasted in the middle of the brewhouse and fermentation tanks, because the guests should know where their beer is made.

Trendy and hip: An image that was difficult to imagine around 15 years ago, says Marie Juliette Marinus, Antwerp's city archivist. Since the early 1990s, she has been examining and sorting files and image documents from the city, which has around 500,000 inhabitants excluding the surrounding area and around 1.2 million.

"The decline in the neighborhood started in the 1960s when the port expanded northwards," she says. As can be seen on a map in the archive, half a century later the new port extends behind the Eilandje over an area that corresponds to three quarters of the Principality of Liechtenstein. The second largest port in Europe - after Rotterdam and before Hamburg.

The city archives have been on the upper floors of the Felix Pakhuis at Willemdok Marina since 2006. The agency was among the first to move to the old port district. “When we found out we were moving to the district, we thought we had misheard,” Marie Juliette remembers with a smile.

Coffee, grain and cheese were once stored where 30 kilometers of documents are now stored. Today the Felix Pakhuis, built in 1860 as a warehouse, with its central 77 meter long glass passage is a listed building. And on the ground floor, the restaurant of the same name opened in 2009, which is one of the culinary tips.

"I could see from my office window how the neighborhood has come to life," says the archivist. In the past, people searched in vain for recommended restaurants here. In the meantime, you are spoiled for choice, whether it is more simple, like in the Sil'eau on Napoleonkaai, or more sophisticated, like in the Pont-Neuf a few meters further.

Arrival: With the Thalys or IC from Cologne to Brussel-Zuid/Bruxelles-Midi (Brussels), from there on to Antwerp. By car from Cologne via Aachen in the direction of Antwerp. The route is a little over 200 kilometers.

Accommodation: Hotels with standard facilities and breakfast are available between 90 and 200 euros per night.

‹ ›
Keywords:
LänderporträtsStädteporträtsStädtereisenMuseenAntwerpenHäfenBelgienHadidZaha
Your comment has been forwarded to the administrator for approval.×
Warning! Will constitute a criminal offense, illegal, threatening, offensive, insulting and swearing, derogatory, defamatory, vulgar, pornographic, indecent, personality rights, damaging or similar nature in the nature of all kinds of financial content, legal, criminal and administrative responsibility for the content of the sender member / members are belong.
Related News