Pensions: the executive procrastinates but wants a reform "before the end of winter"

There will therefore be no forceful passage on this highly inflammable subject, as was feared even within the majority as a day of strikes and demonstrations looms on Thursday, the first of the fall, concerning wages. 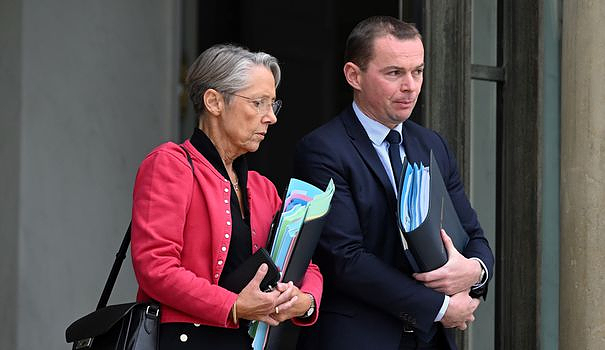 There will therefore be no forceful passage on this highly inflammable subject, as was feared even within the majority as a day of strikes and demonstrations looms on Thursday, the first of the fall, concerning wages. but also presented as a wake-up call on pensions.

At the end of a dinner at the Elysée around Emmanuel Macron on Wednesday evening bringing together the executives of the macronie, prevailed "the choice of dialogue and consultation", declared the Prime Minister, detailing a relatively flexible, but also clinging to the presidential promise of an application of the reform in the summer of 2023.

The head of government wishes to present "an assessment" of these discussions with the social partners and political forces "before Christmas", thus leaving almost three months of potential talks around a reform already in the making during the previous five-year term, before being interrupted by the Covid-19 pandemic.

In this perspective, Ms. Borne asked the Minister of Labor Olivier Dussopt "to start negotiations next week" with employers' organizations and trade unions, as well as with "parliamentary groups" to discuss long careers, hardship, wear and tear on the job. work, or employment of seniors, special schemes, and small pensions.

This decision, which is based on "total convergence between the different components of the majority" according to Ms. Borne, puts an end to several days of procrastination and divisions on how to initiate this pension reform, which provides in particular for a "progressive postponement from the starting age of 4 months per year, culminating in 65 years in 2031", recalled the Prime Minister.

The method was debated: do we need a simple amendment to the Social Security financing bill (PLFSS) examined in October in the Assembly, the most controversial track? A passage through a corrective PLFSS in January? Or an ad hoc bill?

This last option therefore seems to be favored at this stage by the executive... provided that it manages to open the consultations, while the unions and a large part of the political opposition are upwind against the very substance of this reform.

But a dedicated bill presents a risk for the executive, which only has a relative majority in the Assembly.

He could force him to draw Article 49.3 of the Constitution, which allows the adoption of a text without a vote except for a motion of censure, but can only be used once per parliamentary session. On the other hand, the government can use this weapon of 49.3 at will on the budgetary texts, which are therefore the PLFSS.

“There are important subjects on which we wish to open the discussion and therefore we place ourselves in a hypothesis where we can carry out a consultation”, underlined Ms. Borne, while refusing however to definitively rule out the possibility of an amendment. at the PLFSS.

As if to put pressure on LR, in favor of reform but hostile to the path of amendment, President Emmanuel Macron did not rule out dissolving the National Assembly if the opposition voted for a motion of censure against the government. , reported Mr. Dussopt.

"If all the oppositions came together to adopt a motion of censure and bring down the government, he (the President of the Republic, editor's note) would leave it to the French and the French would decide and say what is the new majority they want. “, he said on LCI.

"Chiche" to the dissolution, replied on Twitter Marine Le Pen, at the head of an unprecedented group of 89 deputies.

For Olivier Marleix, leader of the LR deputies, relaunching consultations is "progress". But he did not want to say if LR would vote for such a project, preferring to wait for the “term” of the discussions. "There can be no reform without a minimum of trust" and it is "out of the question to give a blank check", he warned.

On the threat of a dissolution to avoid the "dog bed", according to comments reported by Emmanuel Macron, Mr. Marleix estimated that "whoever sets fire to the powder by saying we are going to do the reform in three days is him".

Sign of openness, the President of the Senate Gérard Larcher (LR) judged on BFMTV and RMC this "indispensable" reform, and considered that "the inspiration (of the executive) is not very far from that" of the Senate , dominated by the right, which each year files an amendment in favor of a pension reform.

The boss of bosses, Geoffroy Roux de Bézieux, judged on FranceInfo "reasonable" the planned consultation and indicated that the Medef "obviously" would participate in it.