Penguins and polonaise - a cruise to Antarctica

The attackers have big black eyes and sharp teeth, they bark and hiss and chase you. 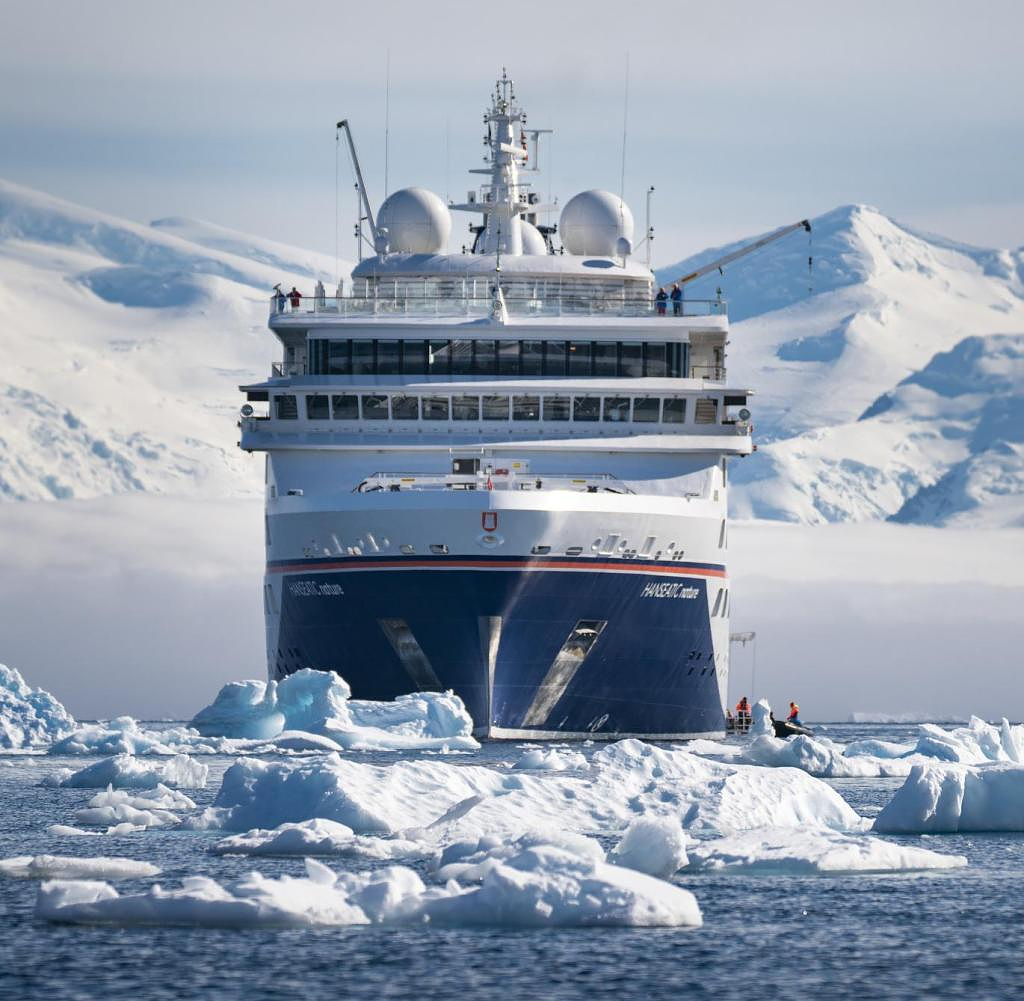 The attackers have big black eyes and sharp teeth, they bark and hiss and chase you. Only a resolute "Boo" call and thrown up arms can stop the wild creatures just before they get hold of them. Gangs of three or four rowdy fur seals ambush tourists in South Georgia. As soon as guests from cruise ships approach the island in rubber boats, the animals get ready behind thick tufts of grass. An adventure begins.

On expedition cruises to the Antarctic, whose season is just starting again, “hands off!” is the top priority: don’t disturb nature, always stay on the paths, don’t touch anything, don’t take anything with you, always keep your distance from the animals. But fur seals and other Antarctic creatures don't care. Seal flails test how dangerous they appear, king penguins curiously poke around in parked tourist backpacks.

Small white sheath-beaks – sneaky birds that usually steal other animals' prey – pinch the boots and buttocks of photographers kneeling on the ground. Only the elephant seals are completely disinterested, they lie around lazily on the beach like thick rolls of carpet and at best emit foul-smelling sighs to the sky.

The experience on land, the exploration of strange habitats, is the goal of the still young expedition cruises, which many shipping companies are increasingly relying on after the Corona pandemic. The potential of large party cruisers is stagnating, and a thirst for knowledge and adventure, coupled with increased climate and environmental awareness, offer a new audience: tours with small ships (up to 250 guests) that can penetrate remote regions, fight their way through the Arctic and Southern Ocean and many friends find their way through narrow fjords or the side arms of the Amazon.

In order to damage nature as little as possible, ships in the Antarctic rely on low-sulphur marine diesel, SCR catalytic converters to reduce nitrogen oxide emissions and e-zodiacs, i.e. dinghies with electric drives. Wellness and entertainment are not in the foreground on these cruises, but the adventures out there, in the sea and on the coasts, you go on an "expedition" - with the greatest possible luxury.

Instead of Hollywood movies, for example, films about famous explorers are shown on the “Hanseatic Nature”, one of the three most modern expedition ships owned by Hapag-Lloyd Cruises. The onboard boutique is tiny - and usually emptier than the so-called Ocean Academy, where books and binoculars provide insight into the structure of algae and the secret life of krill.

In the current winter season, cruise companies such as Hurtigruten, Lindblad Expeditions, Oceanwide, Ponant, Viking, Poseidon Expeditions and Hapag-Lloyd Cruises are again heading towards Antarctica. Some go directly to the frozen continent via the Drake Passage from Argentina, some take the longer route via the Falkland Islands and South Georgia. And since quarantine doesn't fall into the category of adventure that cruise lines prefer, most ships only accept guests who are fully vaccinated against Corona.

But how much adventure do expedition cruises offer, apart from said attacks by yob seals? There's a lot going on on board the "Hanseatic Nature": "Sea leopard on the back side", "former research station on the starboard side" - promising announcements keep coming out of the loudspeakers, cameras are constantly clicking.

The announcement "killer whales ahead" has a particularly electrifying effect: even those exercising in the fitness room interrupt their exercises, open the floor-to-ceiling windows of the gym and run in short sports gear past the outdoor pool and whirlpool to the bow to marvel at the announced sea creatures.

And when the captain once again navigates the ship through a gap that seems far too narrow between two icebergs and later, during dinner, unexpectedly makes a 90-degree turn, the tilt and clattering serving trolleys give you goosebumps while small icebergs pass by outside . But no one is seriously concerned. Expedition ships are made for little adventures like this.

The "Hanseatic Nature", for example, is a state-of-the-art ship, built in 2019, with ice class PC6 - practically a mini icebreaker. The next morning it should show what it can do. The captain wants to implement a long-held plan: circumnavigate James Ross Island. That was exactly his dream since his training as a navigator, he says. Many years ago, for an exam, he had to calculate the perfect route around this remote island in the Weddell Sea. As proof, he shows a card on which the pencil marks of his exam can still be seen.

Now he finally wants to drive the route. The ice is unusually thin, you have to take advantage of that. It shouldn't be a problem for the "Hanseatic Nature". And anyway, the guests are curious expedition cruisers who are looking for adventure, aren't they? The applause proves the captain right.

Actually, the Weddell Sea is not a place for fun excursions - but a scene of great dramas: numerous ships have already been crushed by the ice here, starving crews awaited rescue in storms, darkness and cold. The men moved to Antarctica out of curiosity, a thirst for research or with the hope of a good wage – many of them found misery or even death in the process.

People have battled the elements in the Prince Gustav Channel, where James Ross Island is located. In 1902, for example, the Swedish explorer Otto Nordensköld was launched on Snow Hill Island with five men to explore the island. They should be picked up again the following spring.

But the plan went awry: a ship from the Swedish fleet sank, schedules got mixed up, the weather didn't cooperate. At one point, three different groups of explorers and rescuers got stuck on three different snow-covered islands in the Arctic Ocean. They had to spend the winter in one of the most misanthropic places in the world - and were only rescued after more than a year.

Around a century later, there is no trace of the misery of the explorers on board the "Hanseatic Nature". The sea shines like a mirror between the ice floes. At the edge of an iceberg, minke whales look for krill. Three killer whales steer purposefully towards the ship and inspect the bow up close. Her breath is a white cloud in the icy air, a rancid smell wafts across.

The Weddell Sea is friendly today, the expedition ship breaks through the ice like a crumbly biscuit - and only makes it almost to the southern tip of James Ross Island. 64 degrees 24 minutes south, the captain proudly announces in the evening, then the ice was too strong. He had to turn. Who knows if a cruise ship will be able to complete a circumnavigation this season.

Nobody on board is disappointed: Those who go on an expedition to the Antarctic simply cannot expect records, the weather is too unpredictable for that. This is also evident again and again when a planned shore leave is on the agenda: while the ship is anchored, Zodiacs are lowered into the water from the upper deck with a crane, and the expedition crew sets off on an exploration tour.

She's looking for a section of beach where the motor inflatable boats can land safely. But it often doesn't work right away: sometimes the sea and ice have milled away a beach that was there a month ago; sometimes the surf is too strong and the crew comes back on board soaked and shrugging their shoulders.

Flexibility is required on expedition cruises: If the weather is too bad in the morning to sail into the sea-flooded caldera of the Deception Island volcano, the coast is explored first.

Two hours later, the weather has actually calmed down, and guests can not only hike along the dormant volcano (in lined rubber boots, which are available for hire), but even bathe in the two-degree Celsius waters of Antarctica - and afterwards in the hot volcanic sand warm up. Sometimes you just have to wait a little to get the adventure you're hoping for. That’s why there is a plan for every day on the Antarctic tours – but also a plan B, C and D.

With all flexibility: A bit of a cruise feeling is also offered on expedition tours. One evening there is live music, grilled sausages and free beer, the passengers form spontaneously for a polonaise on deck 8. A few hours earlier they were still on their way to the Neumayer Glacier in the Zodiac, now they toast each other while the on-board pianist is at the bar hit the keys with Whiskey on the Rocks. The ice cubes are of course made of Antarctic ice, brought on board by the crew. In the middle of the Southern Ocean is also that: adventure.

Hurtigruten has Antarctic tours - for example 16 days from Ushuaia (Argentina) including flight arrival and Falkland detour - from 9443 euros in the program (hurtigruten.de).

In the 2022/2023 season, Hapag-Lloyd Cruises is offering various expedition cruises from Ushuaia on the "Hanseatic Nature" and the identical sister ships "Hanseatic Spirit" and "Hanseatic Inspiration". A 16-day tour costs from 13,576 euros per person in a double cabin (plus travel), a 22-day trip from Cape Town to Ushuaia can be booked from 17,290 euros (hl-cruises.de).

If you have a lot of time and a well-filled travel budget, you will find what you are looking for at Lindblad Expeditions: The tour operator offers a 34-day trip from Ushuaia to New Zealand along the Antarctic coast from 52,990 US dollars, which corresponds to around 53,000 euros (without flights; expeditions.com).

Participation in the trip was supported by Hapag-Lloyd Cruises. You can find our standards of transparency and journalistic independence at axelspringer.com/de/Werte/downloads.

‹ ›
Keywords:
HeinemannPiaKreuzfahrtenKreuzfahrtschiffeAntarktisAbenteuerurlaubHanseatic NatureSüdgeorgienUshuaiaChristian WyrwaSüdpolarmeerPoseidon ExpeditionLindblad ExpeditionWeddellmeerEismeerAmazonaAntarktiseisWhirlpoolAll PhotoOcean AcademyArgentinienFalklandinselnSeeleopard BackbordExpeditionskreuzfahrtenReise
Your comment has been forwarded to the administrator for approval.×
Warning! Will constitute a criminal offense, illegal, threatening, offensive, insulting and swearing, derogatory, defamatory, vulgar, pornographic, indecent, personality rights, damaging or similar nature in the nature of all kinds of financial content, legal, criminal and administrative responsibility for the content of the sender member / members are belong.
Related News