Paris 2024: the Organizing Committee of the Games caught up with inflation

The bright red of the Phryges, the mascot of the Paris 2024 Olympic Games, stands out against the gray sky of Paris through the windows of the Gustave Eiffel lounge, perched on the 1st floor of the eponymous tower. 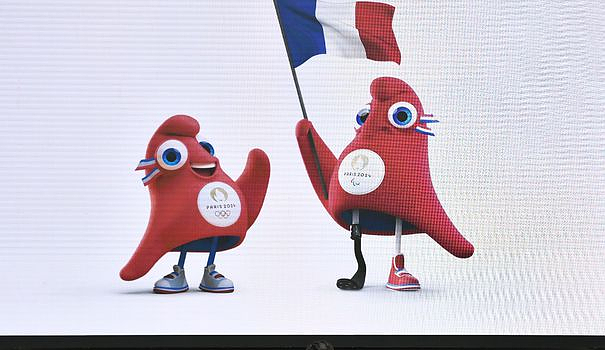 The bright red of the Phryges, the mascot of the Paris 2024 Olympic Games, stands out against the gray sky of Paris through the windows of the Gustave Eiffel lounge, perched on the 1st floor of the eponymous tower. It's hard to imagine that the beach volleyball events will take place in a little less than two years at the foot of the Iron Lady... and yet the countdown has begun. On this Monday, November 28, the team of the Organizing Committee for the Olympic and Paralympic Games (Cojop) is about to give the starting signal for the launch of the ticket office. "A very decisive phase in the success of the Games", underlines Tony Estanguet, the president of the Cojop. From December 1, future spectators will be able to register on a platform, in the hope of being drawn at random in mid-February to buy the first tickets. The atmosphere is festive, with the presence of two Olympic medalists, Laura Flessel (fencing) and Romane Dicko (judo), and Pascal Martinot-Lagarde, vice-champion of Europe in the 110m hurdles last summer, and the broadcast of a film compiling the great moments of French sportsmen during the Olympic Games, accompanied by the intense voice of Jacques Brel getting carried away on "Quand on a que l'amour".

However, a shadow has begun to hang over the Paris Olympic Games: that of the budget. A revision of it must be presented in two weeks, on December 12, and absorb an additional cost of around 10% (400 million euros), bringing the total envelope to 4.4 billion euros. Half of this shock is due to inflation, which is driving up the rating of providers of goods and services for the Olympic Games, especially since 50% of the contracts have yet to be concluded, according to the Ministry of Sports. The other structure of the Olympic Games, the Olympic Structures Delivery Company (Solideo), in charge of the construction of the sites, is also affected by the inflationary shock, to the tune of 150 million euros (out of a budget of 3. 7 billion euros). But if the State and the communities are going to put their hands in their pockets for this second structure, the Cojop, financed more than 97% by private funds (ticketing receipts, sponsors and financing from the IOC), has been active since weeks trying to come up with a balanced budget.

Negotiations with the IOC (International Olympic Committee) on the specifications, reduction in the number of places reserved for federations or Olympic committees, end of croissants and champagne available all day for officials, pooling of means of transport, reduction in the number of torches during the torch relay... Many ways are being studied to eliminate waste. A painstaking job closely watched by the Elysée, which does not want to completely fill a possible deficit which would not stop widening... Because as the public authorities repeat it "games finance games" . And Emmanuel Macron, attached to his promise not to increase compulsory levies, repeated it last summer: "there will be no Olympic Games tax". At a time when public spending is already weighed down by soaring interest rates and the end of easy money, there is no question of falling into the trap that has been that of many Olympic Games: that of skyrocketing costs and leave an insane slate to the taxpayers. Across the Channel, the British still remember that of 9 billion pounds sterling (about 11 billion euros), left by the Olympics in 2012.

But the Elysée and the local authorities are not the only ones to observe... The future candidates for the organization of the Games will not fail to look carefully at the result of the organization of these Olympic Games, presented from the start as " economic" because it is largely based on existing infrastructure or investments already planned. Will France succeed in its bet to organize Olympic Games adapted to the era of "the end of abundance"? Fewer and fewer candidates are jostling at the gate to organize such expensive sporting events. Few states today can afford like Qatar to spend 220 billion dollars to host a football World Cup! Especially since the economic benefits are almost systematically overestimated... In the race for the 2024 Olympics, Budapest had to withdraw its candidacy after the signature of a petition by hundreds of thousands of citizens asking to invest the money likely to be spent on the event in the education and health systems. For those of 2028, Los Angeles was the only candidate, as was Brisbane for those of 2032. To maintain their flame, the IOC will no doubt have to adapt to this new era...