Pakistan: UN chief at the bedside of flood victims

A third of Pakistan is under water - an area the size of the United Kingdom - after months of torrential rains, described last week as a "cataclysmic monsoon" by Mr. 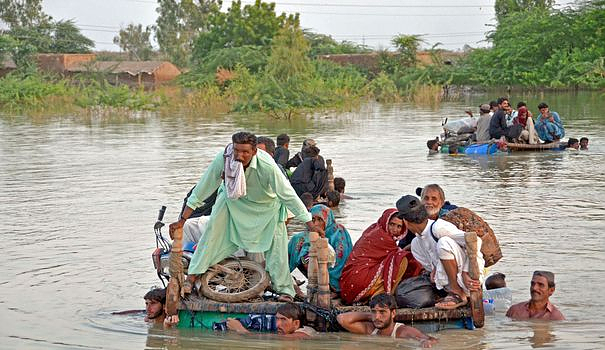 A third of Pakistan is under water - an area the size of the United Kingdom - after months of torrential rains, described last week as a "cataclysmic monsoon" by Mr. Guterres.

The Pakistani government estimates that it will take at least $10 billion to repair and rebuild the damaged or destroyed infrastructure, an amount impossible to muster on its own for an already heavily indebted country.

But before even thinking about reconstruction, the priority remains to feed and shelter the millions of people displaced by the rains.

Rozina Solangi, a 30-year-old housewife living in a flooded village near Sukkur (south), hopes that Mr. Guterres' visit will have a positive effect.

"If he comes to see us, Allah will bless him," she told AFP on Friday. "All the children, the men, the women are roasting in this scorching heat. We have nothing to eat, no roof over our heads. So he must do something for the poor."

In an in-flight tweet, Mr Guterres said he wanted to "stand with people in a difficult time, encourage international support and draw the world's attention to the dire impacts of climate change".

On Saturday, he will visit flooded regions of the South, as well as the thousand-year-old city of Mohenjo Daro, classified as a UNESCO World Heritage Site and threatened by the waves.

The monsoon, which usually lasts from June to September, is essential for the irrigation of plantations and the replenishment of water resources in the Indian subcontinent. But Pakistan had not seen such heavy rains for at least three decades.

Islamabad blames the devastating floods, which affected more than 33 million people, on climate change, which is increasing the frequency and intensity of extreme weather events across the planet.

This year, the country has already faced a heat wave that has sometimes exceeded 50°C, devastating forest fires and devastating floods caused by the rapid melting of glaciers.

Pakistan is responsible for less than 1% of global greenhouse gas emissions, but it is in 8th position among the countries most at risk from extreme weather events, according to a study by the NGO Germanwatch.

Aid has started to arrive as part of an emergency plan for the next six months prepared by the Pakistani government and the UN, after an appeal for $160 million in late August.

On Thursday, a US Air Force C17 landed - the first US military aircraft to come to Pakistan in years - and provided tents and tarpaulins.

While Washington is a key supplier of military equipment to Islamabad, relations between the two capitals have been strained due to their divergent interests in Afghanistan, particularly after the Taliban returned to power in August 2021.

Pakistan received twice as much rainfall as usual, according to the meteorological service. In the southern provinces (Balochistan and Sind), the most affected, the rains were more than four times higher than the average of the last 30 years.

These bad weather caused flash floods in rivers in the mountainous north, which washed away roads, bridges and buildings in minutes, and a slow accumulation of water in the plains of the south which submerged hundreds of thousands of square kilometers of land. .

In the district of Jaffarabad, in the province of Balochistan, villagers fled their homes on Thursday on improvised rafts made of "charpoy", these traditional wooden beds and braided ropes.

Hundreds of makeshift camps have sprung up in the few still dry spaces in the south and west of the country. Raised roads or railways are often the last places where water has not crept in.

With people crowded together and with their livestock, epidemics are to be feared. Many cases of dengue, a disease spread by mosquitoes, and scabies have already been identified.

According to the latest figures from the National Disaster Management Authority (NDMA), floods have killed nearly 1,400 people since June.

Nearly 7,000 km of roads were washed away, 246 bridges destroyed and 1.7 million homes and businesses destroyed or severely damaged.