The Commission concluded that the former head of government "was involved in corrupt practices", one of Mr. 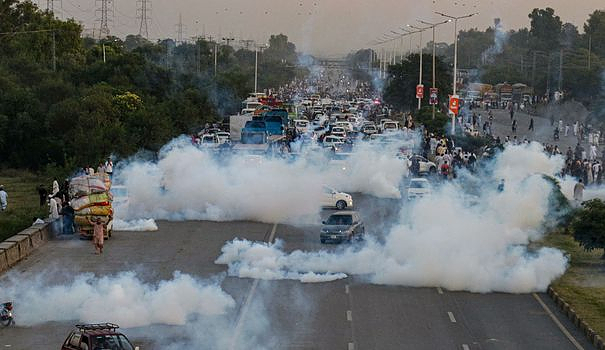 The Commission concluded that the former head of government "was involved in corrupt practices", one of Mr. Khan's lawyers, Gohar Khan, told AFP, announcing his intention to immediately take legal action to make reverse this decision.

If this is confirmed by the courts, Mr Khan, who was overthrown in April by a motion of no confidence in the National Assembly, may not be able to contest the next legislative elections which are due to take place by October 2023.

In the capital, placed on "high" alert, the police used tear gas to disperse the demonstrators, who tried to block traffic.

At the end of the evening, however, Mr. Khan, in a video message, called on his supporters to stop the demonstrations, pending a new "long march" on Islamabad which he intends to hold at the end of the month.

"It will be the longest march in the country's history," he predicted, assuring that his struggle would not end until "the rule of law" prevails in the country.

He accused the Electoral Commission of colluding with a corrupt power. "I will fight them as long as I live," he promised.

The Pakistani press has been running sensational headlines for several months, accusing the former cricket champion and his wife of having received the equivalent of several hundred thousand dollars in gifts, in the form of luxury watches, jewelry, bags in the hands of designers or perfumes, during their travels abroad.

Mr. Khan is accused of not having declared all the goods received under his mandate and of having made money by reselling some of them.

In Pakistan, government officials must declare all gifts received, but are allowed to keep the less expensive ones.

They can also acquire some of the more expensive presents for around 50% of their value. This proportion was only 20% before being increased by Mr. Khan.

The complaint on which the Electoral Commission ruled on Friday was filed when Mr. Khan was still in power, by the then opposition.

At the time, Mr. Khan explained that he had not declared certain goods for national security reasons, but in a written response had also admitted to having bought nearly 22 million rupees (101,000 euros) in gifts and having them then resold for more than double that amount.

Despite his ouster, Mr. Khan retains broad support among the population. Since April, he has held large rallies across the country - drawing tens of thousands of supporters - to pressure the fragile ruling coalition.

The former cricket champion, who keeps repeating his thesis that his fall was the result of a "conspiracy" hatched by the United States, relentlessly criticizes the government of his successor, Shehbaz Sharif, and demands early elections.

He has faced several legal proceedings in recent months, from which he had so far emerged without too much damage, the current government seeking at all costs to exclude him from the next elections.

The country is used to seeing political leaders use the police and the judiciary to muzzle the opposition.

Imran Khan came to power in 2018, after the victory in the legislative elections of the PTI, on a populist platform combining promises of social reforms, religious conservatism and the fight against corruption.

But under his tenure, the economic situation deteriorated and he lost the support of the army which had been accused of helping to get him elected.

The announcement of the Electoral Commission was welcomed with great satisfaction by the power in place.

"Whoever spread lies about alleged corruption of his political opponents has been caught red-handed," Foreign Minister Bilawal Bhutto Zardari tweeted.

For analyst Hassan Askari Rizvi, this decision will mainly result in increasing "political tension" in the country.