Ubetense crafts are once more distinguished beyond local borders. 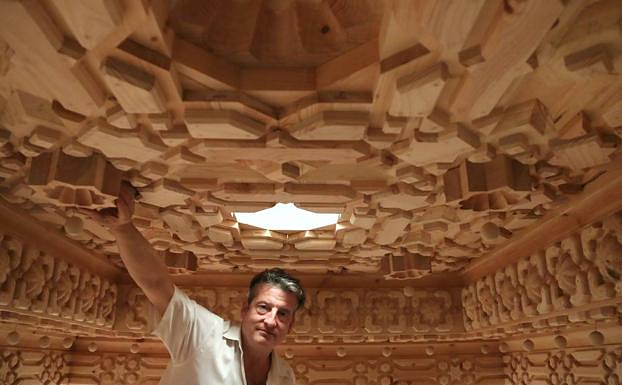 Ubetense crafts are once more distinguished beyond local borders. They were honored at an award ceremony by Paco Luis Martos who is a specialist in Mudejar ceilings and has been awarded one the Andalusian Arts Awards. He is one of four names chosen by the jury to receive the fifth edition of these awards, which were convened by Ministry of Economic Transformation, Industry, Knowledge and Universities.

The 'Crafts Award category specifically recognized Ubet's artist. The jury praised Ubeda's Master Craftsman, who has been working in restoration and manufacturing Mudejar coffered ceilings for more than 20 years, and said that he "has not only recovered, maintained, and guaranteed the continuity of this workmanship, which was in danger of disappearing but has also managed to bring a pure Spanish model of craftsmanship into the rest of the globe>>.

Paco Luis Martos also teaches monographic courses in collaboration with the "Albayzin" School of Training in Crafts, Restoration and Rehabilitation of Historical, Artistic, and Cultural Heritage. This school trains students, artisans, and technicians. This master craftsman considers knowledge dissemination, awareness, and enhancement of the Mudejar ceiling a fundamental pillar. He puts this into practice through conferences and teaching in the field of Anthropology and other spheres. The jury adds that humanism is also important.

Since the 1990s Paco Luis Martos (Ubeda 1969) has dedicated his life to the design, construction, and study of Mudejar-type wooden ceilings. He uses the same style and technique of Spanish architectural and ornamental arts that was developed in Spain between 13 and 13. seventeenth. He was a finalist in the 2009 National Crafts Awards. In 2003, he was awarded recognition by the Junta de Andalucia as a result of his contributions to the preservation and promotion of the craft. His work is now part of the Andalusian Musem of Memory. He is also the recipient of the Albayzin Award, which was given by the center with the same name in Granada for his efforts in promoting crafts and heritage conservation.

Martos was the winner of the Construction Arts Prize. This prize is awarded by the American Richard Driehaus Foundation for his significant contribution to the rehabilitation and revitalization Mudejar coffered ceilings. He was nominated for the Alas Award to the Internationalization and Development of the Andalusian Business in 2007. This award recognizes his export efforts, as well as his establishment on international markets.

The Junta de Andalucia has granted the Charter of Master Craftsman to the Ubetense since 2011. He is one of the youngest artisans to receive this distinction. He was involved in the reconstruction and awarding of the Chapter House at the Sigena Monastery from the 12th century. His project, "Sigena, The magic of a Dream", won the Hispania Nostra award for 2019.

Martos assists technicians and architects with the drafting of projects that use the Mudejar ceiling as a construction component. Martos is also a speaker at historical and cultural heritage forums such as the Andalusian Institution of Historical Heritage.

Jonatan Diaz Navarro from Malaga, a craftsman who makes artistic stained glass windows, has been also awarded in this fifth edition. Antonio Bueno Cortes, from Torrox, Malaga, a cabinetmaker specializing in percussion instruments, was also presented in the category of Innovation in crafts'. The Sevillian Association of Sacred Art brings together image makers, painters and restorers.

The Andalusian crafts awards are designed to recognize artisans and individuals who have contributed to the sector's development in the community. These distinctions recognize innovation, creativity and environmental responsibility as well as initiatives that promote the promotion of this profession.

The Junta de Andalucia, the artisan sector, economic and social agents, consumer groups, and experts in this area made up the jury that issued the ruling. They had to review 45 applications for this edition. This is almost twice the number of applications received in the previous edition. It highlights the high quality of the projects and pieces submitted. The ceremony will take place on September 30,

Andalusia is a Spanish community that has been a leader in the craft industry in Spain. It brings together more than 7,000 businesses, 18% of Spanish craft companies, and provides employment for almost 20,000 people, according to the Ministry of Industry, Energy and Tourism.

Andalusia is home to the largest number of craft workshops in Spain (around 2,500) and the largest trades list (159). There are 65 craftsmen and masters who are recognized in the community, and 29 professionals who have the distinctive Andalusia Craft Quality. In addition to 48 Craft Interest points and 11 declared Craft Interest areas, there are 197 workshops.

The Ministry of Economic Transformation is committed to the promotion of the artisan industry. Rogelio Velasco, the head of the department, has also launched initiatives such as the creation and promotion of the Andalusian Crafts Award. This distinction has been recognized by over a thousand artisans, as well as regional craftspeople.

"Crafts made In Andalusia" certifies that the product bearing this mark was made in a registered craft workshop in the Registry of Craftsmen of Andalusia. It also confirms that it meets all the regulations for its use.

‹ ›
Keywords:
UbetensePacoLuisMartosGalardonadoPremiosArtesaniaAndalucía
Your comment has been forwarded to the administrator for approval.×
Warning! Will constitute a criminal offense, illegal, threatening, offensive, insulting and swearing, derogatory, defamatory, vulgar, pornographic, indecent, personality rights, damaging or similar nature in the nature of all kinds of financial content, legal, criminal and administrative responsibility for the content of the sender member / members are belong.
Related News