Only five Catalan companies from BME Growth are in profit

Only five Catalan companies from BME Growth reported profits at the close of the first half. 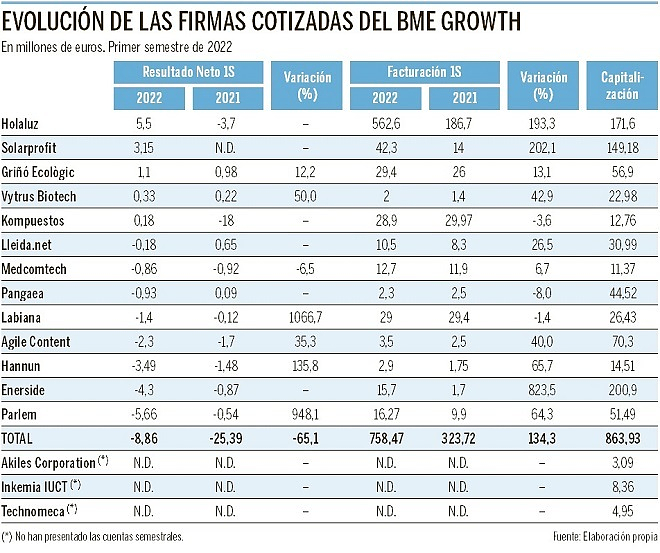 Only five Catalan companies from BME Growth reported profits at the close of the first half. Although they may seem few, it is a common scenario in the alternative market since many of these companies are in a phase of accelerated growth. In fact, if you take a look at the first half of 2021, the number is reduced to four companies. On the other hand, it also highlights that these companies have sustainability as one of their main lines of business.

The 13 Catalan companies listed on the old MAB and that have presented the half-yearly accounts reduced the red numbers by 65%, up to 8.86 million euros of aggregate losses, and reached a joint turnover of 758.5 ​​million, which which means more than doubling the aggregate revenue of the same period of 2021. The rise in revenue is widespread -10 companies increased sales- but, without a doubt, the great protagonist of the first semester is Holaluz.

The company led by Carlota Pi is the one that earned the most money -5.5 million compared to losses of 3.7 million- and the one that billed the most, with 562.6 million, a figure that triples the data for 2021. Holaluz represents the 74% of the aggregate income of the companies listed on the alternative market.

The company is in a moment of reorientation of priorities, with a new strategic plan, after the decision to leave the gas market as a result of the rise in prices. In total, it had a portfolio of 70,000 clients.

The second company that made the most money is Solarprofit. The profit of this company that is dedicated to the design and installation of solar panels in homes and industries amounted to 3.15 million euros. The figure is not comparable with that of the previous semester because the company does not offer the data. However, it is higher than the 2.24 million harvested during the twelve months of 2021.

The company led by Roger Fernández and Óscar Gómez was also the second with the highest turnover, 42.3 million, which means tripling the figure for the same period in 2021. In fact, it invoiced more in six months of this year than in the entire year past.

Griñó Ecològic occupies the third position on the podium for benefits, with earnings of 1.1 million euros (12.2%). The family capital waste management and treatment and environmental services group was also the third with the highest turnover, with 29.4 million (13.1%).

The fourth company that obtained the most benefits is a newcomer. It is the manufacturer of ingredients for the cosmetic industry Vytrus Biotech, with 330,000 euros (50%). For its part, the chemical company Kompuestos also made money by coming out of losses and obtaining 180,000 euros.

The BME Growth company that lost the most money was Parlem, with red numbers of 5.66 million, ten times more than a year ago. The reason is its active acquisitions policy that undermines profitability.

For its part, Enerside, which has also made its debut on the stock market this year, lost 4.3 million euros due to higher investments in renewable energy facilities.