ONCE plans Macael to be the capital of marble

Maria Jesus Segovia, the director of ONCE Almeria, presented today the coupon's image to Raul Martinez, the mayor of Macael. 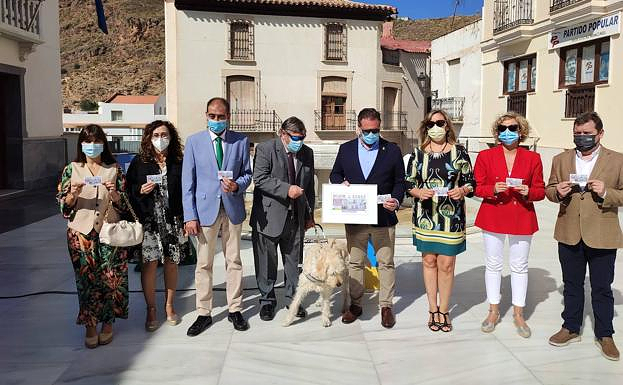 Maria Jesus Segovia, the director of ONCE Almeria, presented today the coupon's image to Raul Martinez, the mayor of Macael. Jesus Posadas was also present at the event.

Five and a quarter million coupons have as their theme a central image of the Fountain of the Lions of the Alhambra, located in Macael, and a perspective of the square. ONCE hopes to claim the Almeria city "as capital of Spanish marble" and "underline in passing its potential and entrepreneurial character, as a key benchmark for the Andalusian sector", according to Alberto Morillas, ONCE director in Granada. He also felt that ONCE's nationwide distribution through its coupon "decidedly contributed to strengthening the potential of the Macael marble quarry in its race for the UNESCO Intangible Heritage candidacy."

ONCE hopes to highlight the strategic importance and region of Macael for the marble sector in Spain with this coupon. Morillas stated, "It's an example of business excellence of which we can all be proud,"

This collaboration is a step forward and a boost for the promotion and enhancement of Blanco Macael marble, as well as of knowledge; "That quality which positions the Macael Marble Sector to be a great transforming centre."

Responsible for large projects across five continents and the production of natural stone. Posadas stated that the Macael brand, which is represented in the replica of Fuente de Los Leones de la Alhambra -in which elaboration companies of the Andalusian Marble Business Association participated- is a symbol of the five and a quarter million good luck coupons that will be distributed in all of Spain.

For 1.5 euros, the ONCE Daily Coupon gives 55 five-figure prizes worth 35,000 euros. The customer can also play the series and win La Paga, a prize of 3,000 euros each month for 25 years. This will be in addition to the 35,000 euro prize. The prizes for the numbers preceding and following the winner are 500 euros and 200, 20 and 6 euros respectively at the final four, three, and two figures of the winning coupon. There will also be a 1.5 euro refund for the first and last figure.

The 19,000 ONCE agents who make up the sales network market ONCE coupons and gaming products. The Point of Sale Terminal allows customers to choose the number they prefer through the POS. You can also purchase them from the ONCE gaming website www.juegosonce.es or authorized collaborating establishments.

‹ ›
Keywords:
OnceProyectaMacaelCapitalMarmol
Your comment has been forwarded to the administrator for approval.×
Warning! Will constitute a criminal offense, illegal, threatening, offensive, insulting and swearing, derogatory, defamatory, vulgar, pornographic, indecent, personality rights, damaging or similar nature in the nature of all kinds of financial content, legal, criminal and administrative responsibility for the content of the sender member / members are belong.
Related News