On the way on Europe's best hiking trail

The red crown on a dark green background is the sign. 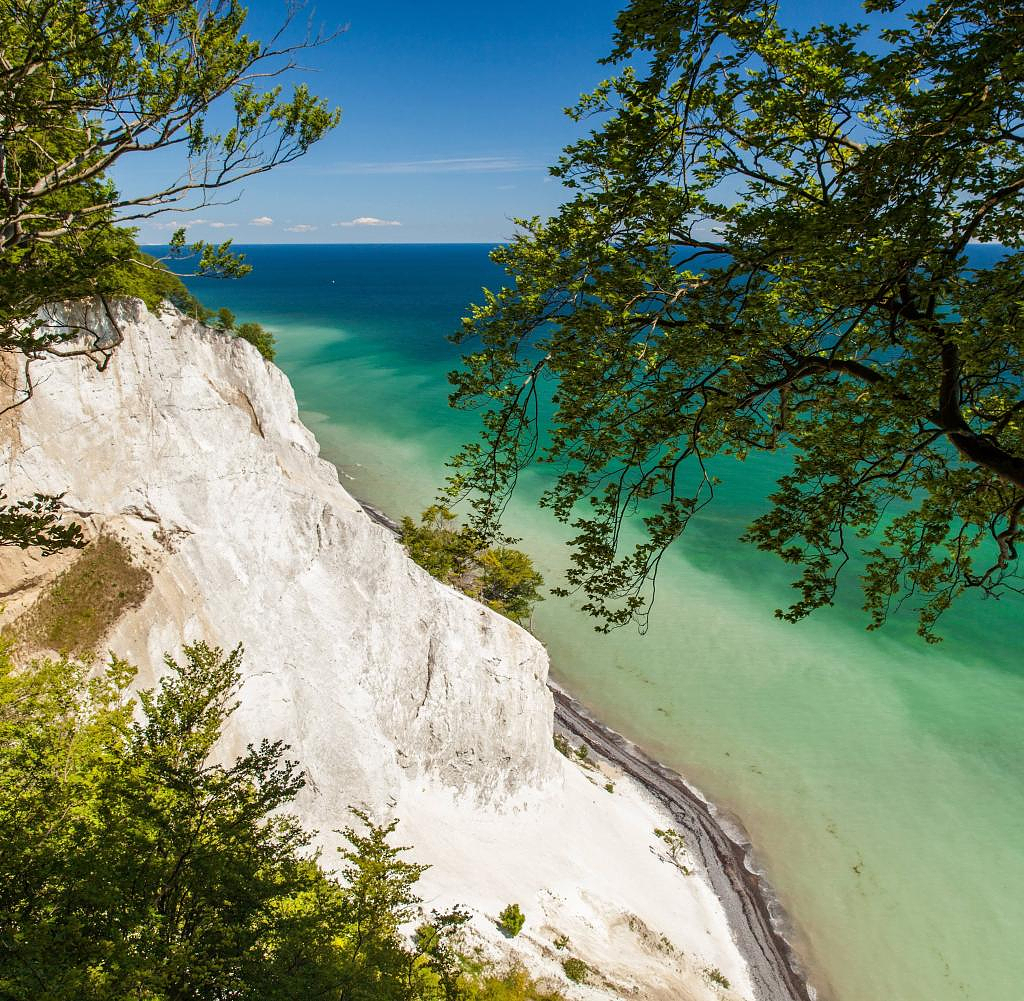 The red crown on a dark green background is the sign. For all those who want to hike the "King of the Cliffs". Alone or with the help of a professional like Tore Steenberg Reyhé, who is on the road practically non-stop from spring to autumn.

Because the guests have been coming in even more numbers than usual since the German Hiking Institute certified the brand new, challenging hiking trail in 2022 with top marks. "Klintekongens Rige", as the route is called in Danish, is not only the first on the Danish islands to be officially awarded a "premium route". It is also considered Europe's best rated hiking route.

The hiking institute in Marburg creates Europe's strictest quality system for hiking routes - there are currently 640 in Germany, Belgium, Denmark, France, Italy, Luxembourg, the Netherlands, Austria, Switzerland and in Rwanda as an exotic African. The hiking seal stands for the highest quality of experience and measures the sensual quality of subjective experiences. These are contributed by independent specialists who collect all experience-relevant data for every kilometer in the field.

To get the seal, a path must offer special goals and many highlights, while dry spells should be excluded. Evaluation is based on around 50 different criteria, from which a point value is finally calculated. A double accolade for Møn: “We now have the highest rated hiking trail in Denmark and Europe here – with 102 experience value points,” beams Steenberg.

Of course, a lot goes into that. For example the varied nature. On Møn, you sometimes go straight to the beach and sea, sometimes along the top of the chalk cliffs. Sometimes through rustic beech forest with tree monuments, sometimes through open pasture landscape with heath and meadows. Liselund Castle Park and GeoCenter Møns Klint meet high demands in terms of culture and education.

The route must be excellently signposted. And in addition to the many terrain types, the altitude difference also plays an important role. "The stairs to and from the beach are especially hard," confirms the guide, who has mastered hundreds of steps effortlessly thanks to daily training. In contrast to his puffing leisure hikers crowd.

The new circular hiking trail is 14.8 kilometers long. A real pleasure for experienced hikers, but a chunk for everyone else. And even Steenberg admits: “I haven't seen anyone who has gone the entire six-hour lap in one go. Including me."

But that shouldn't deter anyone. Anyone can walk this path. In small stages, in small loops. Or half the distance like we did with the Nordschleife today and the Südschleife tomorrow. But no matter when, how and where - you should definitely be good on your feet and never set off without hiking boots.

It's easy at first. The Jydelejet is a gently rounded valley that is particularly popular with botanists and zoologists. Because here, just a few centimeters above the chalk, rare orchids such as the pyramidal dogbane and the white forest bird grow - which in turn appeals to many insects.

Next stage: Descend to the beach via one of the five tiered stairways that connect the cliff path at the top with the beach walkway below. Two hours of hiking below the mighty chalk cliffs.

You can now look out for special stones for two hours. With thunderbolt inclusions. With sea urchin prints. With Klapperstein pebble sponges. And with holes. A six-kilo chicken god finally ends up in your backpack – in Denmark you can take anything you can carry with your own hands from the beach.

For two hours there are stories about the flints underfoot, which are of the best quality, by the way, because they never get frost and therefore do not burst through cracks when you knock out daggers or axes.

Steenberg tells a lot about the 100 meter high vertical chalk layers, which consist of skeletal remains of algae and are full of fossils: snails, mussels, sea urchins, fish fragments. He reports on chalk falls like in 2007, when the “Great Preacher”, an icon splashed spectacularly into the sea under the cliff formations – with around half a million tons of chalk, clay, gravel and vegetation.

And he talks about the peregrine falcon, which can dive at over 300 km/h – making it the fastest animal in the world. He disappeared from Denmark for 30 years because environmental toxins made the eggs infertile. Then in 2002 the miracle happened: A Swedish male and a German female mated on Møns Klint and had offspring. Today, two to four pairs breed on the chalk cliffs each year. However, there is no guarantee of a sighting.

In the end it took almost three hours from stair to stair. For less than two kilometers that feel like at least five in your calves and feet. Walking on the flints is a grueling test for ligaments and muscles, and the climb up the stairs gives them all the rest.

But the next premium spot is already waiting at the top: the romantic pleasure gardens in Liselund. A thatched miniature castle is the center of the park, which a noble couple had laid out at the end of the 18th century - in the spirit of Jean-Jacques Rosseau's philosophy of nature. The Danish socialite, which also included the fairy tale writer Hans Christian Andersen, enjoyed themselves here.

Now it's back to Jydelejet through the beautiful forest. After that, half the lap is done, with various stops and breaks we were on the road for five hours. With the exception of Tore Steenberg, everyone is exhausted, but everyone agrees: tomorrow will be the southern loop. Even if bones and knuckles hurt: Nobody wants to do without the chalk-white queen's chair.

Getting there: With Scandlines from Puttgarden to Rødby (45 minutes) or from Rostock to Gedser (two hours), continuing by car to the cliffs takes about an hour (scandlines.de).

Accommodation: Holidays in cottages are extremely popular on Møn. Novasol (novasol.de), for example, offers a large selection; a cozy alternative is the Egn Bed

Dark Sky Experience: fascinating night walks to the dark side of light in Scandinavia's first Dark Sky Park. It is about the importance of darkness for nature and human health (darkskymoen.dk/en/sightseeing-dark-sky-park).

Premium hiking trails: Excellently marked routes and circular hiking trails with a high hiking experience, pleasant routes and a selected dramaturgy. The Premiumweg hiking seal makes the quality of a hiking trail quantitatively measurable on the basis of an extensive catalog of criteria, details at wanderinstitut.de/premiumwege/daenemark/klintekongens-rige/.

Participation in the trip was supported by Visit Denmark. You can find our standards of transparency and journalistic independence at axelspringer.com/de/Werte/downloads.

‹ ›
Keywords:
DänemarkLänderporträtsOstseeRegionenporträtsInselnWandernWanderurlaubEuropaEkkehart EichlerDark Sky ParkWadeVisit DenmarkKlippenwegBuchenwaldReise
Your comment has been forwarded to the administrator for approval.×
Warning! Will constitute a criminal offense, illegal, threatening, offensive, insulting and swearing, derogatory, defamatory, vulgar, pornographic, indecent, personality rights, damaging or similar nature in the nature of all kinds of financial content, legal, criminal and administrative responsibility for the content of the sender member / members are belong.
Related News