On the north-eastern front, the Ukrainians want to nibble away at the ground little by little

"The most difficult thing for me is the death of my friends. 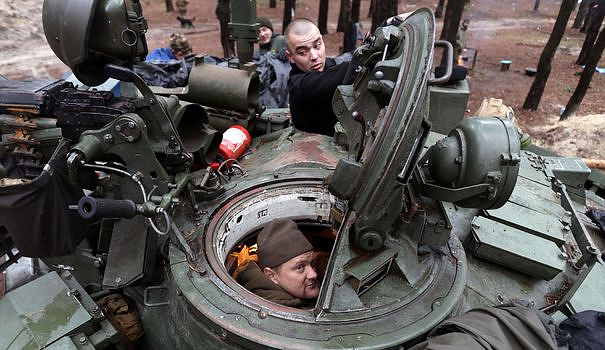 "The most difficult thing for me is the death of my friends. I already had motivation before ... but anger, aggression and hatred reinforced it", says "Viking", the nom de guerre of this 26-year-old tanker.

Despite the heavy casualties suffered by the Ukrainian army in the nine months of fighting since the start of the Russian invasion in February, "Viking" and the other members of his platoon remain confident in their ability to win the war.

“We plan to push the Russians to the borders and even further,” he jokes.

His unit took part in the September breakthrough which shattered Russian defense lines on the northeastern front, pushing Moscow's forces east across the Oskil River.

This counter-offensive has slowed since the Russians reformed their defences, but the Ukrainians say they are still making progress, despite the winter cold which is straining supply lines and road conditions.

"We repelled the Russians, we gained a foothold and we are advancing little by little," explains "Patriot", a 23-year-old soldier, member of a platoon who is camping in a bucolic meadow surrounded by pine trees near the front.

"There are a lot of bombings. Last month, I heard about 100 to 200 attacks," he told AFP during a visit to their position organized by the Ukrainian army.

Nearby, a 44-year-old military mechanic, who asked not to be identified, works on the engine of a Russian tank captured in September and which he is now using against its former owners.

"The state of the Russian equipment is very bad. Everything was dirty and covered in diesel," he said, adding: "It's almost ready."

After nine months in the field, the unit's equipment, which dates from the Soviet era, reflects the dynamics of this war: one tank was provided by the Ukrainian army, another was taken from the Russians and a third was donated by Poland.

Ammunition is partly made up of Russian stocks captured on the battlefield. "It's Russian lend-lease law," jokes another team member who calls himself "Agronomist," referring to a US deal to supply arms to Ukraine.

In this area of ​​the northeast of the country, the Ukrainians hope to seize a key highway that serves the cities of Severodonetsk and Lysychansk further east, occupied by the Russians.

These two towns were captured after a brutal summer campaign in the industrial region of Donbass, in which both sides lost large numbers of soldiers.

Russian forces have since had a string of setbacks, losing much of the Kharkiv region and recently withdrawing from the southern city of Kherson, which they had occupied since the start of the war.

"On this part of the front line, we are responsible for holding our position and sometimes launching counter-offensives," says Roman, a member of the main tank battalion operating in the area.

"The situation is completely under control and we are ready to take on new, even unexpected challenges," he said.

Military experts say the pace of fighting could soon pick up, with frost solidifying roads currently covered in mud.

“Temperatures are expected to drop across Ukraine over the next week, which should freeze the ground and increase the pace of fighting as mobility increases on both sides,” says the American think tank Institute for the Study of War in a recent review.

For fighters on the ground, falling temperatures matter less than Russian artillery barrages.

"When you know you can be hit at any time, the adrenaline keeps you warm. You don't feel the cold," says "Patriot".