On July 15, the Youth Fest will fill Balerma's center with urban music. 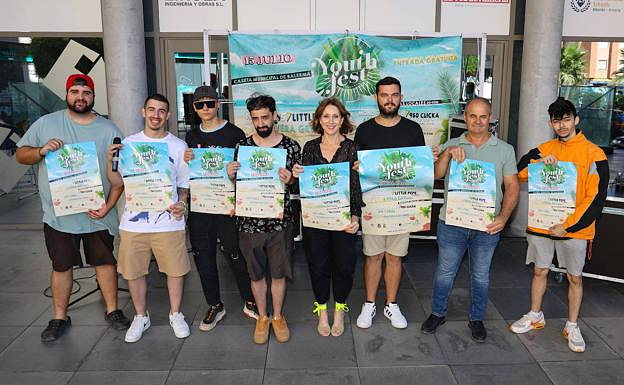 Two years later, the 'Youth Fest' local urban music festival returns to the municipality. However, it has changed the date and the location. This event, which is free and aims to revitalize the young city sector, will be held on July 15th in the middle Balerma's patron saint celebrations, in honor de la Virgen del Carmen in the municipal booth.

Julia Ibanez (Consultant for Culture) was responsible for announcing the details of yesterday's important event. This program, which seeks out to value local musicians from the municipality as well as emerging bands and is part the 'Youth in El Ejido 2020/22' program.

Ibanez stated that they want to create a space for young people to meet, and it will coincide with a very important date which is the Festival of the Virgen Del Carmen in Balerma. This will allow tourists to come to the population center to encourage and stimulate youth cultural programming.

The Festival will be open at 6:00 p.m. and close at 1:00 a.m. From 6:00 p.m. until 8:00 p.m. the Festival will open with a Battle of Roosters and FreeStyle, in which two rappers will face off verbally. The DJ will set the base and allow the rappers to improvise rhymes. The higher the score, the more structured and styleful the rhyme is.

The fourth edition will see the Urban Warrior Association organize the battles which will take place in afternoon slot 1.

Ato y Cura (950 Clicka), Moad Serrano and Ato y Cura) will take the center stage. They will be accompanied later by DJ FIXI and speaker 'ALRAP. The Vera GRV concert, which will be followed immediately by Little Pepe's performance, will begin at 10 p.m., and will continue until midnight when it will be Nadal 015.

"In this edition, and as a novelty, we have incorporated purple points with the goal of promoting a festival without violence through information prevention and awareness," stated Ibanez. He also said that Colleague from Almeria will also have an information point and that a space for people with reduced mobility will be created to facilitate universal accessibility.

The programming developed by the Department of Culture of the City Council is titled 'Cultural Summer El Ejido2022'. It includes more than 70 ideas.

Ibanez also announced that the summer cinema would include more than 30 projections from Monday through Thursday in July and August at the Almerimar rugby field, the Palmeral de Balerma and the Municipal Park of El Ejido. Also, the Library of San Agustin and the municipal booths of Las Norias and Los Banos de Guardias Viejas will be featured.

The theater will reach the nuclei of the young ones with a variety of 'Circo Alas,' 'Cirkalgia,' 'Que Son Molinos,' and ’El Mago que susurba, a las lettuces’. The Councilor for Culture insists that the program is "very complete, varied, and will delight residents and visitors throughout summer."

Ibanez stated that the heritage routes would also be conducted throughout the summer with the goal of continuing to publicize the historical legacy in El Ejido through the Wim Kuiper route, the family routes of "Survival in the Prehistory" and, as a novelty the route "Mysteries around the castle", which is an educational and entertaining visit>>

Guardias Viejas Castle Concert Cycle returns with its XXIII Edition, featuring more shows than ever. This includes the Cultural Fusion concert of Turkish musical music. This summer's programming includes two sessions at Castillo de Guardias Viejas, one a tribute to The Queen' and the other a celebration of 'The Beatles'.

Some of the proposals for this year are also supported by the programs Flamenco Comes from the South and the Andalusian Network of Public Theatres. The 'Guajira tour', an association dedicated to art and culture promotion, will also visit the municipality with three concert circuits. It will feature the flamenco speaker as well as the female artist. Artists from national and international relief.

‹ ›
Keywords:
YouthFestLlenaraMúsicaUrbanaNucleoBalermaJulio
Your comment has been forwarded to the administrator for approval.×
Warning! Will constitute a criminal offense, illegal, threatening, offensive, insulting and swearing, derogatory, defamatory, vulgar, pornographic, indecent, personality rights, damaging or similar nature in the nature of all kinds of financial content, legal, criminal and administrative responsibility for the content of the sender member / members are belong.
Related News