On his return to politics, Zemmour warns against "the great indoctrination"

In a field in Gréoux-les-Bains, in the Alpes-de-Haute-Provence, the ex-polemicist counted "7,000 people, twice as many as expected", who came to attend a political return speech, in a fervor sometimes stunned by the heat. 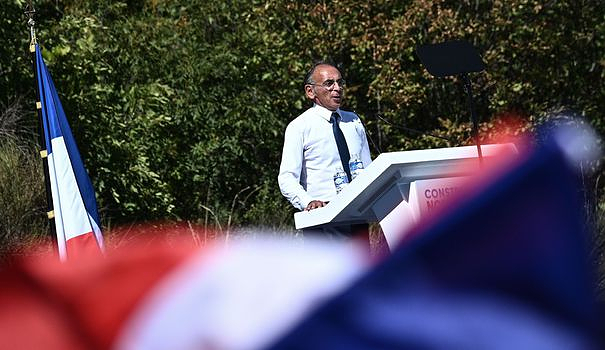 In a field in Gréoux-les-Bains, in the Alpes-de-Haute-Provence, the ex-polemicist counted "7,000 people, twice as many as expected", who came to attend a political return speech, in a fervor sometimes stunned by the heat.

The unfortunate candidate may have sworn that he was "not there to talk about the past campaign", it was despite everything an exercise in assessment and prospects in which he engaged, certain of having "been right in the face of the 'Story".

Without self-criticism but recalling the glorious hours of his crowded meetings or his televised debates, the boss of Reconquête! recognized a "restorative and saving summer" after his double defeat in the presidential and legislative elections.

Faced with the reservations of those who criticized him for his obsession with identity issues, the former journalist tried to occupy the ecological field by declining a pro-nuclear plea, or to talk about the economy by advocating a less redistributive state.

But it is on its fundamentals that the fourth man in the presidential election has especially insisted, adding to the theories of "great replacement" and "great downgrading" that of "great indoctrination".

By considering that "the school (in) is at the heart", he targets "ideologies" in general and the EELV deputy Sandrine Rousseau or the Minister of National Education Pap Ndiaye in particular. Boos fed in the bays.

On the theme of "Let's protect our children", Eric Zemmour made a long development on the school, asking his troops to "don't let anything pass", "denounce", "protest", through a "national network vigilant parents "present" in each establishment.

"I want every parent to be able to point out to us the aberrations of which their children are victims at school", he developed, castigating "the teachers (who teach) your children that France is guilty of crimes against the 'humanity' or 'outsiders (teaching) your six-year-old daughter that if she wants to, she can become a boy'.

And, by analogy with the term "feminicide" which appeared in public debate, he proposes to call "francocide" the "beating, rape, murder, of a Frenchman by an immigrant".

If the public is enthusiastic and Eric Zemmour boasts of "holding the most important political comeback in the country", the far-right movement remains in the grip of questions.

"I do not lose sight of the next deadlines", explained the ex-presidential candidate, while, in the alleys of the Provençal raout, many activists are already pleading for Marion Maréchal to take the lead in the list for the elections. Europeans of 2024.

It is also the form that Reconquest! must take, as well as its relations with other right-wing and far-right parties which are debated among members, while Marine Le Pen, crowned with a historic score in the second round of the presidential election and the election of 89 deputies, held a meeting at the same time on his land in Hénin-Beaumont (Pas-de-Calais).

"Eric Zemmour's bet was to find a political space that stood out on the subject of identity and on a more liberal aspect. However, a large part of the popular electorate is on the contrary rather attached to social protection in view of the crisis", noted Sunday on FranceInfo the political scientist Benjamin Morel, by observing an "extremely complicated context" for the ex-polemicist.

Among its troops, we want to be reassured by looking in particular to Italy, where the post-fascist party Fratelli d'Italia (Brothers of Italy) is the favorite for the legislative elections and whose boss, Giorgia Meloni, is tipped to become head of government. "It had started at 3% a few years ago", recalls the vice-president of Reconquest! Nicholas Bay. However, according to him, "it is much closer to the Zemmour line than that of Le Pen".