"Oh, how beautiful it is" - Clemens shoots a dramatic home game thriller in Ally Pally

What a thriller, what a furious race to catch up! Gabriel Clemens was about to be eliminated at the Darts World Cup, was already 2:3 in sets and 0:2 in legs behind in his third round match against Jim Williams. 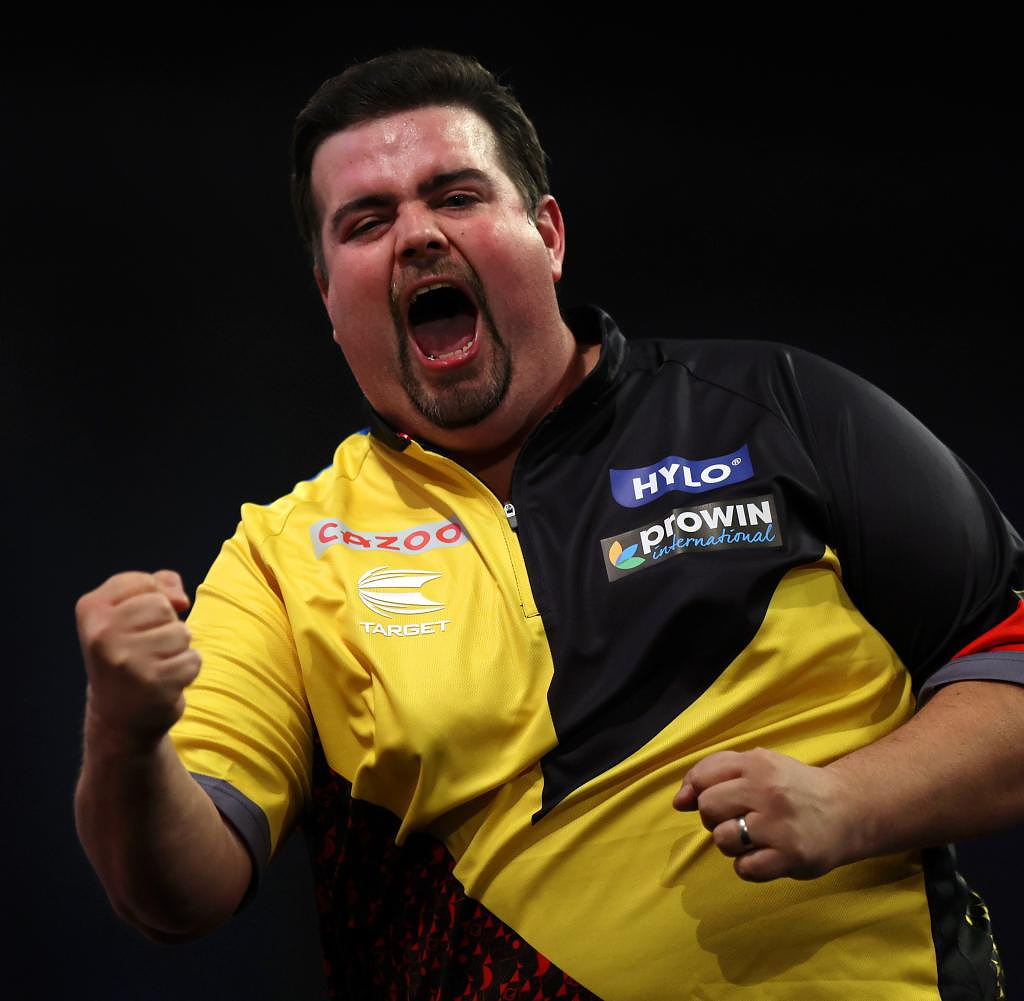 What a thriller, what a furious race to catch up! Gabriel Clemens was about to be eliminated at the Darts World Cup, was already 2:3 in sets and 0:2 in legs behind in his third round match against Jim Williams. In the end, however, the man from Saarwellingen cheered, unable to believe what he had just accomplished with his match dart converted on the bullseye. Almost 1000 Germans celebrated in the Alexandra Palace, and in front of the screens there must have been well over a million who witnessed what was probably the best match of his career.

"I can't say anything two minutes after the game. But it was definitely one of the best games. Above all, it was a great performance in terms of fighting," said Clemens in the usual understatement: "I was actually dead, then somehow managed to pull my head out of the noose and did some really good things."

This is only the second time in World Cup history that a German has reached the round of 16. Clemens himself had knocked out the defending champion with Peter Wright two years ago in the third round, but then failed in the round of 18 in a drama on the doubles field with seven match darts missed by Poland's Krzysztof Ratajski.

This time the situation was fundamentally different. Against Jim Williams, number 77 in the world rankings, the "German Giant" faced the weakest of all third-round participants, at least according to the ranking. The 39-year-old, 52 positions higher, was the favorite and initially also won the walk-on duel of the Britpoppers from Blur and Oasis on behalf of them.

The fact that Clemens' "Wonderwall" was sung much louder than Williams' "Park Life" was probably also due to the German fans in Ally Pally. The Professional Darts Corporation (PDC) announced that around 750 tickets had gone to the home country of the Saarlander. In fact, the many songs and Germany flags showed that more than a quarter of the 3,200 fans in the West Hall were sold out. "Oh, how beautiful that is," was the voice heard through Alexandra Palace both before the first dart and during the first break.

The Welshman delivered the first highlight, starting the match with a high finish of 111 points at the break. Clemens, however, sufficed from now on two attempts on the doubles for a 2:1 lead - and then four set darts to win the first round.

In the second set, the Saarlander took a break, didn't hit the triple so consistently and not a single double field. Williams equalized 3-0 on 13, 14 and 18 darts. Both averaged 92 points. "I've been warned about him, I played against him once on the tour and lost," Clemens warned before the throw-up in an interview with "Sport1". And at least at the last World Cup of the British Darts Organization, the 38-year-old made it to the final in 2020.

Williams opened round three with a break to make it 1-0, but the Saarwellinger countered via double six and then averted the next loss of serve in a spectacular way. Clemens checked 157 points to make it 2-1 after legs and shortly afterwards, accompanied by German chants, to make it 2-1 after sets. His average had climbed to 98. The German was the significantly better scorer, but Williams hit more than half of his attempts on doubles (57.1 percent). The decider of the fourth set, in which Clemens was left with 62 points after nine darts, but missed his two set darts and watched as Williams scored once more was typical: 2:2.

Set five also started with a break from Williams. 111 points to make it 1-0 provided the basis for the Welshman's lead for the first time, who won the fifth round 3-1, now had an outstanding 63.2 percent hits on the doubles and now had the throw-off advantage on his side.

Clemens didn't seem to have much to oppose his strong opponent, gave up the next two legs and was about to be eliminated with eight points left by Williams. The German, however, pulled his head out of the noose again, checked to make it 1:2 and also checked with a high finish to make it 2:2. He actually seemed to be able to pull the match his way again.

After missing an attempt to equalize, Williams earned a match dart on double six with 126 points left, but also missed. Clemens, on the other hand, checked double eight to make it 3:3 in the last attempt. Insanity!

The start of the decisive set became Clemens' fourth leg win in a row before Williams was able to briefly interrupt his opponent's run to make it 1-1. But Clemens remained stable, managed to make it 2:1 and checked 85 points on the bullseye to win.

In the round of 16 he will now meet Danny Noppert from the Netherlands or Alan Soutar from Scotland. "I don't care," said Clemens, "there are no easy tasks in the round of 16." In the afternoon, alongside Dimitri van den Bergh and Jonny Clayton, youngster Josh Rock also reached the round of 16. The 21-year-old Northern Irishman defeated Nathan Aspinall 4:3 in a high quality and exciting match.