Of wrinkles and desires: better accommodating the sex life of seniors

The elderly are not "first of all objects of care", but "can still love and be loved", says AFP Yann Lasnier, the general delegate of this association which fights against the isolation of the elderly. 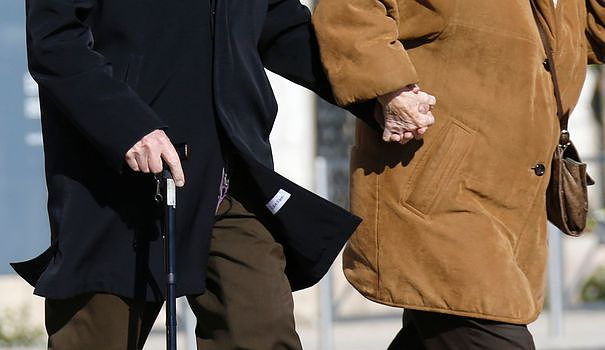 The elderly are not "first of all objects of care", but "can still love and be loved", says AFP Yann Lasnier, the general delegate of this association which fights against the isolation of the elderly.

According to a CSA Research study carried out on behalf of the "Little Brothers" among 1,500 seniors over the age of 60, 91% of elderly people in a couple say they feel desire for their spouse, 74% still have sexual relations, and 71% of seniors believe that "an aging body can still be desirable".

Findings that run counter to a number of received ideas, which the association wants to combat through a communication campaign in October. "Let's not reduce the elders to our clichés," suggest the posters, which show white-haired couples caressing each other or exchanging fiery kisses.

"Changing mentalities is important", approves Patricia, 61, interviewed by AFP, who readily evokes her "desire" for Raymond, 68, with whom she rebuilt her life five years ago. "Because we are old, we would have no more value, no more personal life, no more sex life?" she is indignant.

On the anonymous listening line managed by the "Little brothers", a kind of "SOS friendships" for seniors, more than one in ten calls relate to emotional or sexual life, testifies Mélanie Rossi, the manager of this device. .

“Many men report sexual misery, and need to tell their fantasies about the neighbor or the caregiver,” says Ms. Rossi. "And many women of 75 or 80, often widows, say they lack tenderness".

Many seniors say they suffer a lot from loneliness, especially after the death of their spouse. “I am alone like a dog”, affirms Edouard (first name modified), 101 years old, who says he thinks “every day” of his wife who died seven years ago, after 50 years of living together.

To fight against this isolation, plead the Little Brothers of the Poor, it is necessary to maintain or open places of conviviality, such as cafes, guinguettes or other dancing teas, which allow “to have fun and possibly to make romantic encounters”.

The association also asks that digital training for seniors include an approach to dating applications.

Because couples can sometimes form later. Claude, 86, has thus found love in his retirement home, and intends to marry his downstairs neighbor, "gentle and caring". "I didn't think it would happen to me at my age," marvels the octogenarian, quoted in the report.

However, such cases are not necessarily well seen in nursing homes, where impulses are considered a "problem", and the privacy of seniors is not always respected, underline the authors of the report.

The association thus warns against certain innovations, such as this bed “full of sensors” which can “analyze heartbeats or restlessness during sleep”, but could also “detect other very private activities, alone or two".

The elderly care sector needs a "long-term cultural revolution", says Francis Carrier, president of the GreyPride association, which organizes training in retirement homes to raise awareness of these issues.

He thus intends to address the employees, so that they adopt an "open and respectful speech", the seniors themselves "because they have a degraded image of their body", and the children of the residents, who sometimes disapprove of the wishes of their old parents.

In any case, insists Mr. Carrier, "by talking about sexuality and emotional need, we cling to the desire to live".