Ocean Viking: the fate of the survivors in the dark, a week after their reception

Since the humanitarian ship chartered by SOS Méditerranée docked in Toulon last Friday, at the end of a diplomatic standoff which degraded Franco-Italian relations and reignited a controversy in France over immigration, the 234 survivors have been placed in a holiday center in the Var transformed into an international "waiting zone" from which they could not in theory leave. 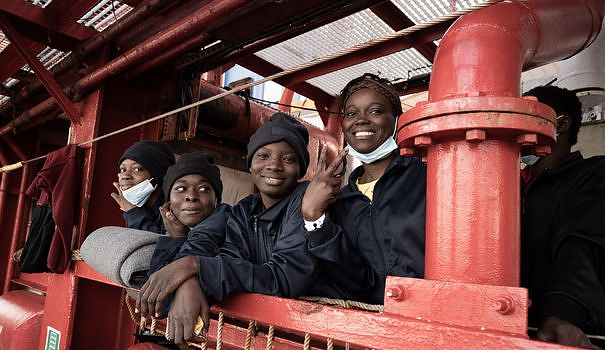 Since the humanitarian ship chartered by SOS Méditerranée docked in Toulon last Friday, at the end of a diplomatic standoff which degraded Franco-Italian relations and reignited a controversy in France over immigration, the 234 survivors have been placed in a holiday center in the Var transformed into an international "waiting zone" from which they could not in theory leave.

But a week later, this strategy seems to be shattered under the blows of court decisions, unexpected departures from reception centers for minors and imbroglio over expulsions.

The 189 adults placed in the waiting area located on the Giens peninsula, in Hyères, were all interviewed by the French Office for the Protection of Refugees and Stateless Persons (Ofpra), which was to determine the merits of their request for asylum so that they are officially admitted to the territory.

The Ofpra has issued "123 unfavorable opinions" and the persons concerned "are the subject of a refusal to enter the territory", indicated Friday before the Council of State a representative of the Ministry of the Interior.

Asked, the latter did not indicate whether this refusal would lead to an expulsion procedure.

Earlier this week, Interior Minister Gérald Darmanin said that at least 44 people who had received an unfavorable opinion would be "deported" to their country of origin.

The French asylum agency has also "issued 66 opinions in favor of admission to the territory", said Charles-Edouard Minet, deputy director of legal advice and litigation at the ministry, during the hearing at the Council. of State devoted to the relevance of the confinement zone created by the authorities.

These people "will be able to be relocated" to the eleven European countries (including Germany, Finland or Portugal) which had volunteered to welcome them after their landing in France, AFP was told. Place Beauvau.

Just like "those whose release the judicial judge has decided" and who "are oriented towards asylum systems", added the ministry.

Because at the same time, the Aix-en-Provence Court of Appeal announced on Friday that it had validated the release of "almost all, even all" of the 108 survivors who demanded that they no longer be locked up.

A situation "which is changing from minute to minute", recognized the ministry before the Council of State, to such an extent that the government estimates at twelve the number of migrants still in the center on Friday afternoon.

To this vagueness are added "people released but returned voluntarily" to the site "to benefit" from the accommodation, recognized, disillusioned, the representative of the ministry.

"We created this waiting area to deal with the most urgent... But the arrival of these people was not unexpected. It's a political choice, we knew we were going to welcome them. We decided to place themselves in a situation that leads to judicial carnage", castigated before the high administrative court Me Patrick Berdugo, who defended for the Syndicate of Lawyers of France the idea of ​​​​closing the "waiting area", a solution "neither valid , nor viable".

Outside this contested place, 26 unaccompanied minors out of the 44 rescued have already left the reception facilities made available by the Var Departmental Council.

"Emmanuel Macron and Gérald Darmanin have their Leonarda affair. Our government is humiliated by the escape of 26 minors from the Ocean Viking and the French see, once again, that all of this is out of control", lamented the RN candidate. in the last presidential election, Marine Le Pen, in allusion to the management under François Hollande of the expulsion of a Roma schoolgirl.

For its part, after a week of invective with the new far-right government in Rome, the Elysée on Friday described Italy's refusal to open its ports as an "ugly gesture".

"We must work together to find effective solutions for immigration," said Emmanuel Macron's entourage. "Simply, what is very clear is that the people we have welcomed, it will be that less that we will relocate within the framework of the agreements we have with Italy."