Oaxaca - Where the trendy drink Mezcal comes from

A few precautions are usually taken when traveling through Mexico. 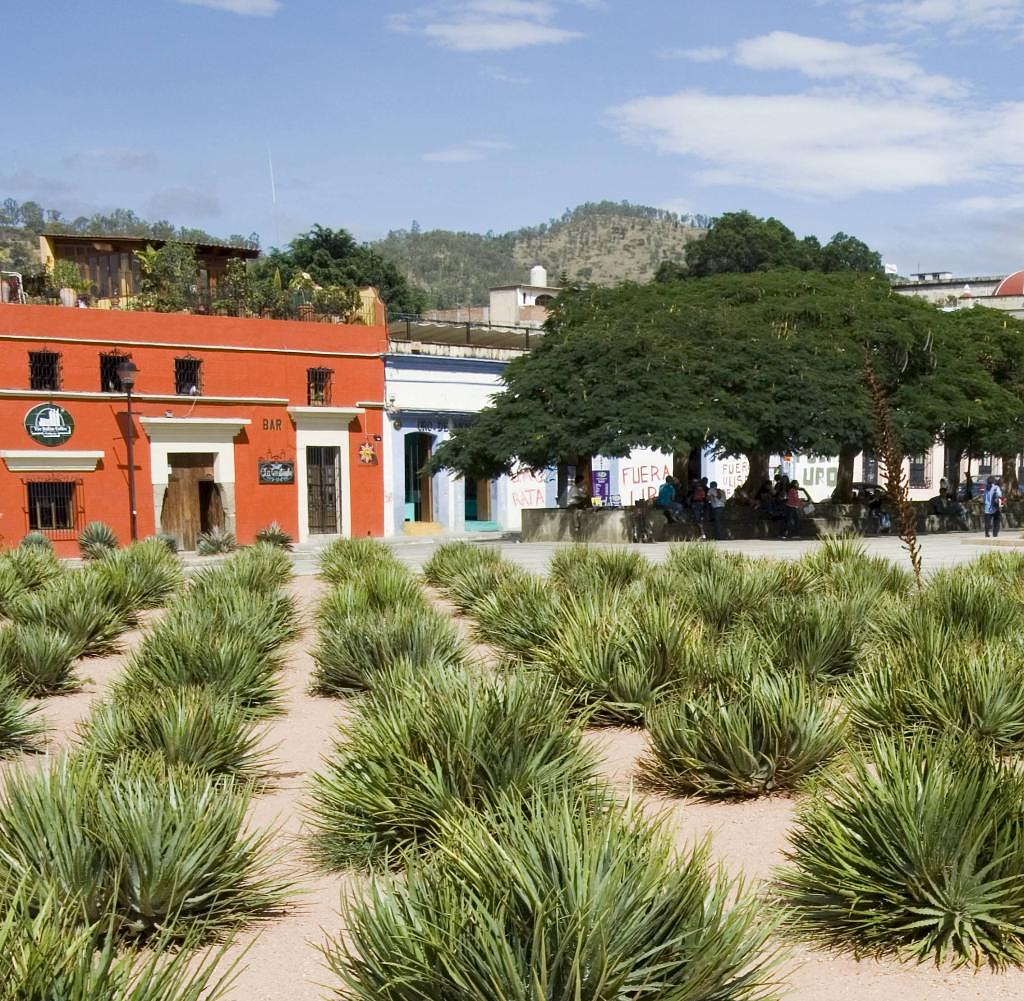 A few precautions are usually taken when traveling through Mexico. For example, in some areas of the big cities it is better to go only in daylight. And if you still get out of bed half asleep in the morning, you'd do well to shake your shoes out vigorously. After all, a scorpion could be hiding in it - and nobody wants to start the day with its sting. So far, so clear. But who would have thought that such a scorpion could sometimes lurk in the drink?

At least it is reassuring that the animal, which is about as long as an outstretched index finger, no longer poses a threat. At least, as long as you don't get the idea of ​​gulping it straight out of the mezcal bottle he sunk onto the bottom of. And luckily no one is doing that on this sunny afternoon in the village of San Baltazar Chichicápam in the state of Oaxaca.

Instead, the mood is relaxed. In a small room, seven visitors from the US, Canada and Europe taste more than a dozen types of mezcal, which are stored in large plastic containers resembling petrol cans on the exposed concrete walls. The farmer conducting the tasting pours a small amount of the spirit into a wooden bowl. The visitors take turns drinking from it. The scorpion stays on the bottom of its plastic bottle.

The guests also made the trip to Oaxaca in central Mexico because mezcal, made from agaves, has become a trendy drink in bars between New York and Tokyo in recent years. "Like most people, I had my first experiences with agave schnapps with tequila shots with salt and lemon," recalls Alexander Mahler, one of the participants.

Back then, the focus was more on getting high than on enjoying it. "But when I asked for a whiskey drink in a bar a few years ago, the bartender advised me: try it with mezcal!" The drink tasted completely different than I expected and had nothing to do with the shots from before . Since then, the 37-year-old German has noticed more and more high-quality bars that offer mezcal.

In contrast to drinks such as gin or vodka, which are produced all over the world, mezcal is produced exclusively in Mexico - around half of it in Oaxaca, predominantly in small, rural businesses in the villages of the region.

Alvin Starkman knows many of these producers. In his native Canada, Starkman originally worked as a lawyer. In 2004 he moved to Mexico. Since moving, Starkman has been fascinated by mezcal, the distinctive taste. He passes on his knowledge to visitors on Mezcal tours.

He leaves Oaxaca City with his group of guests and drives south through the dry plain at an altitude of around 1,500 meters. Wild agaves grow on reddish soil in many places in the high valley. With their thick, wavy leaves, they look like they came from another world.

In fact, they've adapted perfectly to Oaxaca's long dry spells, Starkman explains. They store the rainy season water in their leaves. Botanists, who differentiate between dozens of species, call them “succulents”, the “rich in sap”.

What the various agave species have in common is that at the end of their lifespan, which can be a few years or a few decades, a stalk up to twelve meters high quickly grows from their center, at the end of which flowers form that are pollinated by bats at night.

Félix Ángeles Arellanes has set himself the task of interrupting this boom. The strong man lives in Santa Catarina Minas. As a farmer, he plants tomatoes, among other things, but lately he has also been producing more and more mezcal. “Each family produces mezcal differently. You don’t read books or watch YouTube videos, you learn from your ancestors.”

Just before the agave is about to stretch its blossom into the sky, he and his employees grab the machete. Because at this moment the agave collects its energy in the form of carbohydrates directly below the emerging stalk. The pawns then cut it off just like the leaves. What remains is a stump that looks like a pine cone or pineapple and is named after this "piña".

The piñas are baked in an earth oven for several days, causing the carbohydrates contained in the plant to caramelize. In fact, the flesh of the piñas that are then broken into pieces tastes sweet. In Arellanes' company this is done by hand, elsewhere horse-powered mills do the arduous work.

The crushed piñas are then fermented in wooden vats filled with water - by microorganisms from the air. Once the sugar has turned into alcohol, the brew is distilled twice.

Partly, as at Arellanes, in stills made of clay, elsewhere also in those made of copper. Arellanes' distilleries are currently in operation: smoke emanates from several ovens, which stand in the shade of a hall open on two sides, while the burned mezcal slowly drips into a canister.

Each of the many steps—from the variety of agave used to the firewood to the fermentation process and the material of the still—affects how the mezcal tastes, Starkman explains. No Mezcal is the same as the other, as the Mezcal sample proves. The tasting also offers schnapps from farmer cooperatives who do not operate their own distilleries. For example in the village of San Baltazar Chichicápam mentioned at the beginning.

The agave variety Espadín most frequently processed into Mezcal is "edgy, a bit spritty, tending to be sour," says Alexander Mahler. In contrast, mezcal from the agave species Tobaziche tastes sweeter and spicier. Also, the scorpions that are placed in individual Mezcal bottles after firing can alter the taste. These types of mezcal were once used as medicine.

A category of its own is the Pechugas. These are types of mezcal made for special occasions like weddings. Pechugas are distilled a third time, often using unusual ingredients such as seasonal meat and fruit. "Meat is used because it's relatively expensive," explains Starkman. This emphasizes the character of the Pechugas as a luxury good. And since the fruit mix differs depending on the season, the pechugas underline the individual taste of the mezcal.

Whether it's Pechuga or ordinary Mezcal: The standard of living of the farmers in the villages has improved noticeably as a result of the boom in recent years. "Ten years ago, the children would go to Mexico City to look for work there, or straight to California, where they would work during the apple harvest or the grape harvest," says Félix Ángeles Arellanes, the mezcal producer. His son, on the other hand, who also makes mezcal, has now built a house in Santa Catarina Minas.

Given the importance of the agave, it seems understandable that they have been accorded great cultural importance for centuries. The Aztecs even had an agave goddess. Today, a wooden cross often adorns the fermenting mash.

For their part, visitors are quite willing to shell out up to $70 a liter for some of the finer local varieties. That's still a steal compared to imported mezcal in their home countries. There the spirits often cost two and a half times as much. Nevertheless, the Corona crisis has not left the mezcal producers untouched. Fewer tourists have come to Mexico, and many farmers have lost income.

Exports have also declined. In many places, bars and restaurants either had to close completely or were only allowed to open at a reduced capacity. Starkman and his colleagues have therefore launched a "program for the future". On behalf of their guests, they bought part of the mezcal production from the farmers and gave the bottles to the buyers as soon as they were able to visit Mexico, or sent them by post. "100 percent of the proceeds go to the mezcal distillers and their families," Starkman assures.

But even after the end of the Corona crisis, it is not certain whether the smallholder Mezcal producers can easily continue the boom of recent years. On the way back to Oaxaca City, the car rushes along the expressway in the direction of the setting sun, not only numerous agaves, but also large industrial halls.

The piñas are ground there by machine, no longer by hand or with a horse mill. The mash ferments with the help of filtered water, always with the same properties. "The quality is going down," worries Starkman.

Before Corona, the demand was so great that small farmers and large producers could not meet it together. "The tide makes all ships swim," goes a saying in Mexico. But how long the mezcal tide will continue to rise and how far it will carry is not yet clear.

Getting there: Flight to Mexico City, from there by domestic flight with Aeroméxico to Oaxaca City or cheaply by bus (about seven hours, preferably overnight, ado.com.mx).

Accommodation: The pretty city of Oaxaca de Juárez is considered safe: Even at night you don't need a taxi in the city center. Small boutique hotels have moved into numerous historical buildings. This also applies to the "Hotel Casona" in the middle of the city center, which serves breakfast in the inner courtyard surrounded by colonnades, double rooms from 80 euros, www.lacasonaoaxaca.com

Food: Oaxaca is considered the culinary heart of Mexico. Restaurants with local, national and international cuisine are lined up in the city center. For example, "Los Danzantes" opposite the church of Santo Domingo de Guzmán, in a historic building, it serves specialties from Oaxaca (menuonline.in/danzantes/)

Test mezcal: Alvin Starkman offers guided tours in Oaxaca with just a few participants to small farmers and cooperatives that produce mezcal. The price depends on the duration of the tour, around 150 euros per day and person, mezcaleducationaltours.com. Online shops like the Mezcalería offer a large selection of different types of Mezcal, mezcaleria.de/de/

In the evening looked too deep into the glass and then in the morning a strong headache. There is currently a heated debate on social networks about an alleged miracle cure for hangovers: electrolyte mixtures.

‹ ›
Keywords:
MexikoLänderporträtsHarte AlkoholikaAlkoholische GetränkeKanadaSanta Catarina MinaMezcalEuropaTobias SauerSan Baltazar ChichicápamReise
Your comment has been forwarded to the administrator for approval.×
Warning! Will constitute a criminal offense, illegal, threatening, offensive, insulting and swearing, derogatory, defamatory, vulgar, pornographic, indecent, personality rights, damaging or similar nature in the nature of all kinds of financial content, legal, criminal and administrative responsibility for the content of the sender member / members are belong.
Related News