Lewis Ford could be satisfied, he says himself. 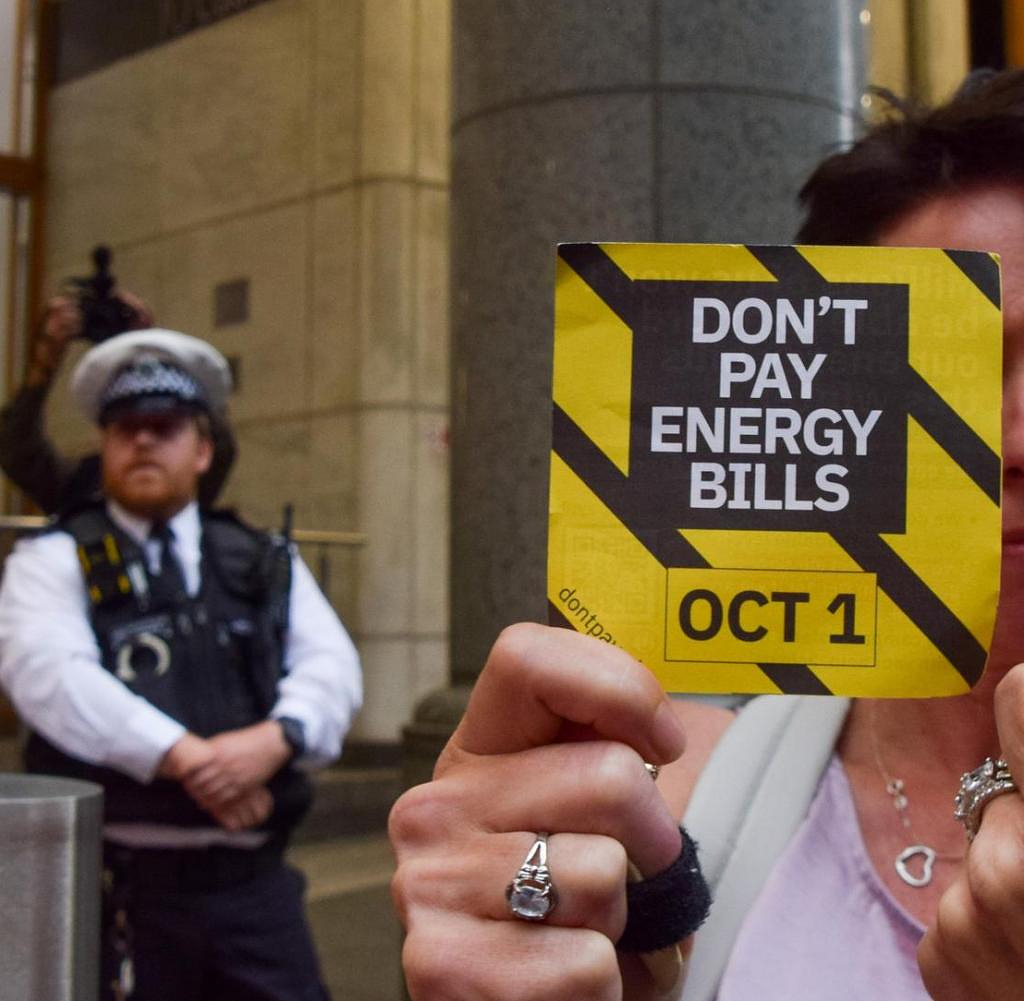 Lewis Ford could be satisfied, he says himself. The IT expert, in his early 30s, from Hull in north-east England got a raise in April, and his wife has also had a well-paying job since the beginning of the year. "We are earning a lot better than we ever expected at this point."

And yet the money is not enough for the family of four. With the pay rise came a surcharge on kindergarten fees and inflation hit groceries. At the end of the month, the money regularly runs out, and there is no room for savings despite not traveling or doing hobbies, according to Ford.

It is this ever-increasing financial pressure that has prompted him to join a civil disobedience initiative and stop paying his utility bills as of October 1st.

"Don't Pay" is the name of the campaign that has been getting more and more popular in Great Britain for weeks. Started in June by anonymous organizers, almost 134,000 Britons had joined the movement by Friday and announced that they would terminate their direct debit authorization for the gas and energy supplier at the beginning of October and would no longer pay.

In the next four weeks, "Don't Pay" wants to increase the number of volunteers who no longer pay to at least one million. "Together we will ensure that nobody has to freeze this winter," the organizers summarize their ambition.

Specifically, they are demanding, among other things, a reversal of the higher energy costs that will apply from October 1st. On this date, the regulatory authority Ofgem raised the upper limit that gas and electricity companies can charge per unit supplied by almost 80 percent. Instead of the previous 1,971 pounds (2282 euros), an average household will then pay 3459 pounds a year. A year ago the cap was 1277 pounds.

They are also demanding an emergency tariff from the government in order to enable cases of social hardship to have a winter with heating and electricity. Regional groups of volunteers have already been set up to obtain information, explain the concept and, if in doubt, support each other in the event of disputes with the energy suppliers.

British households are more directly affected than most Europeans by the sharp rise in gas and energy costs. The rise in prices is passed on almost directly here. The maximum price that tenants and owners pay to the suppliers has been adjusted every six months, but the period has just been halved.

Significantly higher prices are therefore already on the horizon as early as January. Added to this is the great importance of natural gas for heat and energy generation. At the same time, the building stock is considered to be one of the oldest and poorly insulated in Europe. The government has launched aid programs, but they are also less extensive than in other European countries.

In January, 42 percent of all households in the country could no longer be able to adequately heat and supply their homes with sufficient energy because of high energy costs, coupled with generally significantly higher prices, a study by the End Fuel Poverty Coalition warned on Friday .

"Fuel poverty" or energy poverty includes households that spend more than ten percent of their disposable income on electricity and heat. According to the calculations, 12 million households would be affected, compared to 4.6 million in the previous year.

The households affected by this situation not only face the risk of deep economic cuts, but they also face significant health problems in clammy, damp living spaces, the authors warned. The coalition brings together welfare organizations, regional administrations and trade unions.

"There is a widespread health crisis looming, with hypothermic, hungry children unable to play or do their homework, and elderly people unable to be discharged from hospital because their living quarters are no longer suitable for living in," said Ruth London of the Financial Times' Fuel Poverty Action constituents.

From the International Monetary Fund to think tanks and health scientists, numerous experts have warned in recent days about the economic and health effects of the energy crisis in the country.

The announced refusal to pay "Don't Pay" falls on fertile ground given the bleak prospects for the winter. According to a survey by More in Common, 70 percent of Britons expect this form of protest to become widespread. More than 80 percent say there will likely be significant protests and more strikes because of the pressure on the cost of living.

The country has already had experience with a similar form of protest in the past. When a poll tax called the Community Charge was introduced under then Prime Minister Margaret Thatcher in 1990, 17 million Britons refused to pay. The levy, which was the same for everyone, regardless of the economic situation, was felt to be deeply unfair - and ultimately could not be enforced.

At the same time, many observers warn of the possible consequences of non-payment. Households could be switched to tariffs that have to be paid in advance and are usually significantly more expensive. The organizers of "Don't Pay" also advise anyone who is already using such a tariff not to participate, as there is a greater risk of being cut off from the network altogether. There is also the threat of legal difficulties and a deterioration in the credit rating.

But the organizers rely on the power of large numbers. They only want to become active when a million volunteers are ready to boycott payments. The suppliers would not turn off the electricity and gas for such a quantity, they argue.

Financial expert and consumer advocate Martin Lewis also sees it that way. A consumer strike is by no means improbable in view of the general conditions, he said before the next price increase was confirmed. "Government needs to get on top of this because once it's considered socially acceptable not to pay your energy bill, people will stop paying."

‹ ›
Keywords:
ElektrizitätZiviler UngehorsamInflationLondonGasThatcherMargaretEnergiepreiseEnglandHullApple PodcastKarriereBrexitGroßbritannienAmazon MusicHaushaltLewis Ford
Your comment has been forwarded to the administrator for approval.×
Warning! Will constitute a criminal offense, illegal, threatening, offensive, insulting and swearing, derogatory, defamatory, vulgar, pornographic, indecent, personality rights, damaging or similar nature in the nature of all kinds of financial content, legal, criminal and administrative responsibility for the content of the sender member / members are belong.
Related News