Chancellor Olaf Scholz has defended Greece against Turkish threats in the dispute over Greek islands in the eastern Mediterranean. 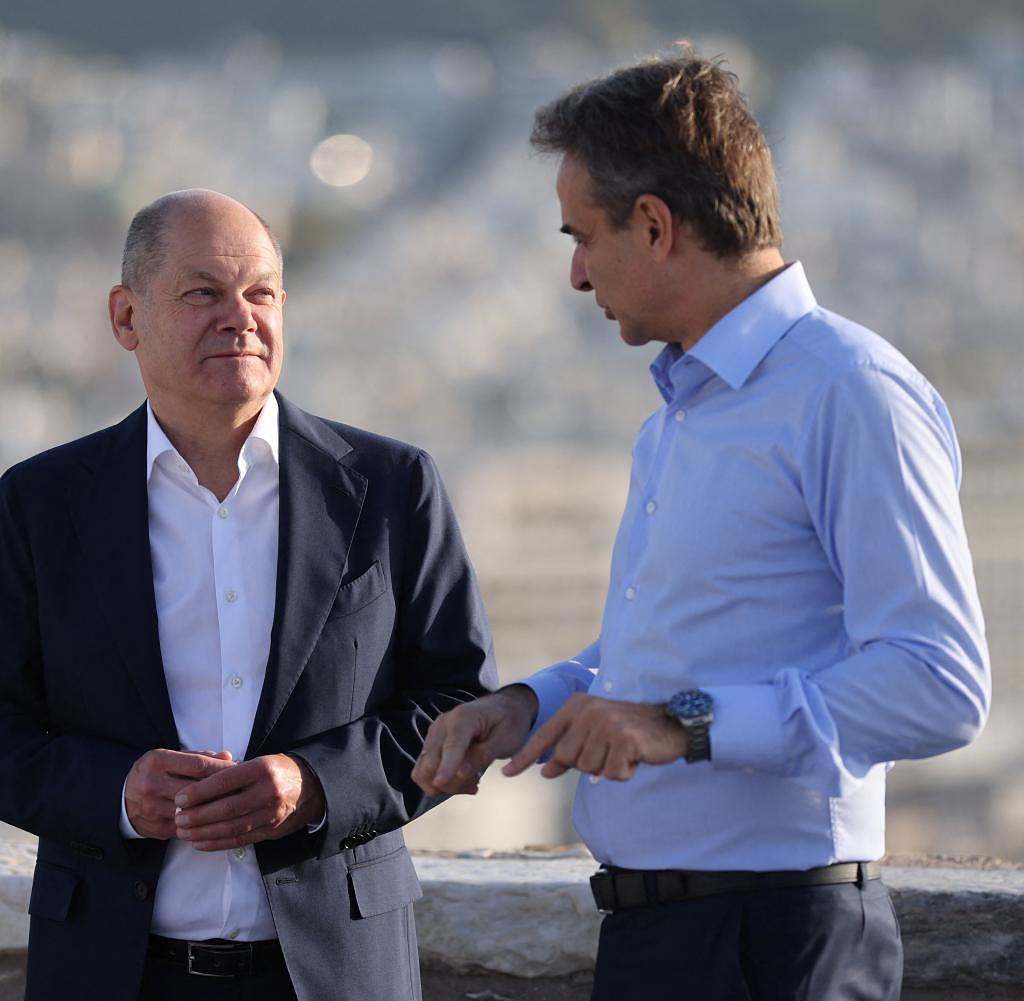 Chancellor Olaf Scholz has defended Greece against Turkish threats in the dispute over Greek islands in the eastern Mediterranean. "It is unacceptable when one NATO partner questions the sovereignty of another," Scholz told the Greek newspaper Ta Nea before his meeting with Greek Prime Minister Kyriakos Mitsotakis in Athens on Thursday. "This also applies to more or less encrypted military threats."

Turkey is challenging Greek sovereignty over numerous inhabited and uninhabited Greek islands in the eastern Mediterranean and is demanding the withdrawal of all Greek troops from those islands. The situation between the two NATO partners in the Aegean is extremely tense at the moment. Turkish President Recep Tayyip Erdogan had repeatedly threatened Greece in recent weeks with the sentence: "We could suddenly come one night."

Scholz called on both countries to resolve the conflict through dialogue. "Good, neighborly relations between Greece and Turkey are important not only for both countries, but for all of Europe," he said. "The Federal Government is committed to ensuring that the open questions between the two countries are resolved in dialogue and on the basis of international law."

The chancellor also offered German mediation in the dispute. "Our common goal, our vision should be to exploit the full economic potential of the eastern Mediterranean region. For the good of all countries,” he said. "If that is considered useful by those involved, Germany can get involved here."

The territorial dispute between Greece and Turkey is likely to be one of the main topics of the conversation between Scholz and Mitsotakis. Foreign Minister Annalena Baerbock (Greens) had already clearly sided with Greece during a double visit to Athens and Turkey in July, thereby antagonizing the Turkish government.

"Greek islands are Greek territory and nobody has the right to question that," Baerbock had said and was then sharply criticized for this by her Turkish colleague Mevlut Cavusoglu. The dispute also involves natural gas deposits in the eastern Mediterranean.

Scholz arrived in Athens on Wednesday evening after his visit to Paris. Mitsotakis first wanted to show him the Acropolis, the biggest tourist attraction in all of Greece, on Thursday. Then the political talks take place.

It could also be about armaments cooperation. The federal government had agreed on a ring exchange with Greece in order to supply the Ukraine with 40 Soviet-designed BMP-1 infantry fighting vehicles, which Athens had once received from East German stocks. The Greek armed forces will receive 40 German Marder armored personnel carriers. The first six arrived in Greece a few days ago.

Greek claims for reparations for war damage caused by German occupiers in World War II could also come up again. Scholz rejected her in the "Ta Nea" interview. "Legally and politically, the question of reparations is closed," he said. However, he emphasized that it was important for him to come to terms with and remember the terrible crimes. "I am very grateful that Greeks and Germans are united in friendship and partnership in Europe today."

Nazi Germany invaded Greece on April 6, 1941. The SS and Wehrmacht carried out numerous massacres there until 1944. Tens of thousands of Greek civilians lost their lives in the war. A Greek parliamentary commission estimated the amount of war damage caused by Germany at at least 289 billion euros - including a forced loan that Greece had to grant to the Deutsche Reichsbank during the war. The government of Prime Minister Mitsotakis has repeatedly emphasized that it is sticking to the reparations demands.

Germany considers the issue legally closed and refers to the two-plus-four agreement on the foreign policy consequences of German reunification from 1990.

‹ ›
Keywords:
NewsteamScholzOlafMitsotakisKiriakosErdoganRecep TayyipGriechenlandPolitikTürkeiPolitikReparationenTexttospeechAthenKyriakos MitsotakisOlaf ScholzMittelmeerTa NeaAkropolisTürkeiEuropaApple PodcastAnnalena BaerbockGrüneRecep Tayyip ErdoganPolitikGriechenland
Your comment has been forwarded to the administrator for approval.×
Warning! Will constitute a criminal offense, illegal, threatening, offensive, insulting and swearing, derogatory, defamatory, vulgar, pornographic, indecent, personality rights, damaging or similar nature in the nature of all kinds of financial content, legal, criminal and administrative responsibility for the content of the sender member / members are belong.
Related News