Earlier Saturday, Pyongyang had defended its recent increase in ballistic activity as a "legitimate reaction" to "direct military threats from the United States", while Washington, Seoul and Tokyo see the missile launches as a "serious threat for peace and security". 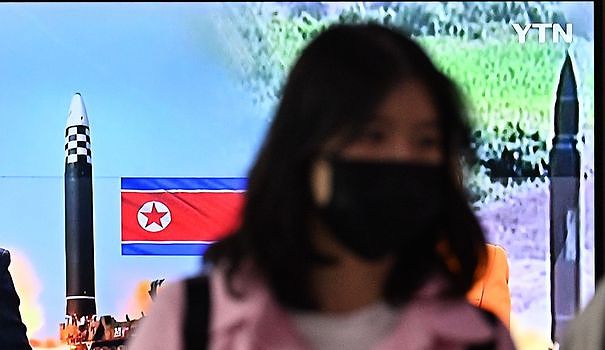 Earlier Saturday, Pyongyang had defended its recent increase in ballistic activity as a "legitimate reaction" to "direct military threats from the United States", while Washington, Seoul and Tokyo see the missile launches as a "serious threat for peace and security".

During the night, Pyongyang fired two of these machines towards the sea, announced the South Korean army, quoted by the news agency Yonhap.

Citing the Japanese government, the Japanese agency Kyodo specified that the two missiles had been fired in the direction of the Sea of ​​Japan and that they appeared to have fallen outside the exclusive economic zone of Japan.

According to the country's coastguard, no damage to a Japanese vessel has been reported, Japanese broadcaster NHK said.

These are the seventh and eighth firings of this kind in two weeks, and they come against a backdrop of growing tensions with the United States, which has intensified its joint military exercises with Seoul and Tokyo over the same period.

"While strengthening its surveillance and vigilance, our army remains ready to go into action on the field, in close cooperation with the United States", reacted the South Korean joint staff in a press release quoted by Yonhap.

North Korean missile tests have increased in the past two weeks. Two ballistic missiles were fired on Thursday and two days earlier the North launched an intermediate-range ballistic missile (IRBM) over Japan, forcing some of the archipelago's residents to take cover .

"The missile test launch by (North Korea) is a regular and planned self-defense measure to defend the country's security and regional peace against direct military threats from the United States that have been going on for more than half a year. -century," the North Korean civil aviation agency said on Saturday, without specifying which launch it was, according to the official KCNA news agency.

State media released the statement after the International Civil Aviation Organization (ICAO), which holds its annual meeting in Montreal, on Friday condemned ballistic tests carried out by Pyongyang in recent months and called them a danger. for civil aviation.

The reclusive country considers this resolution adopted by the ICAO as "a political provocation by the United States and its vassal forces aimed at undermining [its] sovereignty".

For their part, Seoul, Tokyo and Washington have intensified their joint military exercises in recent weeks, and carried out new maneuvers on Thursday involving a US Navy destroyer.

The Pyongyang firing comes amid a record year of weapons testing by the communist regime of North Korea, which leader Kim Jong Un has said is an "irreversible" nuclear power. thus ending the possibility of denuclearization talks.

The United States on Friday announced economic sanctions against two individuals and three entities accused of participating in the illegal export of oil to North Korea.

Washington, Tokyo and Seoul participated in a trilateral meeting on the same day and agreed to "continue to closely coordinate their short- and long-term responses, including with allies and United Nations partners," the Department of Defense said. US state in a statement.

North Korea issued a new statement on Saturday in which it said it was "very closely following the extremely worrying development of the current situation", referring to the deployment of the American aircraft carrier USS Ronald Reagan during the joint American-Southern maneuvers. Korean this week.

The exercises carried out jointly by Seoul and Washington arouse the anger of Pyongyang, the North Korean regime considering them as the repetition of an invasion.

These maneuvers are "extremely provocative and threatening", KCNA said on Saturday, seeing in the participation of the USS Ronald Reagan "a kind of military bluff".

Analysts say Pyongyang has taken advantage of dissension in the UN Security Council to carry out ever more provocative weapons tests.

In addition, Seoul and Washington have been warning for months that Pyongyang will conduct another nuclear test, likely after the Chinese Communist Party (CCP) congress due to open on Oct. 16.